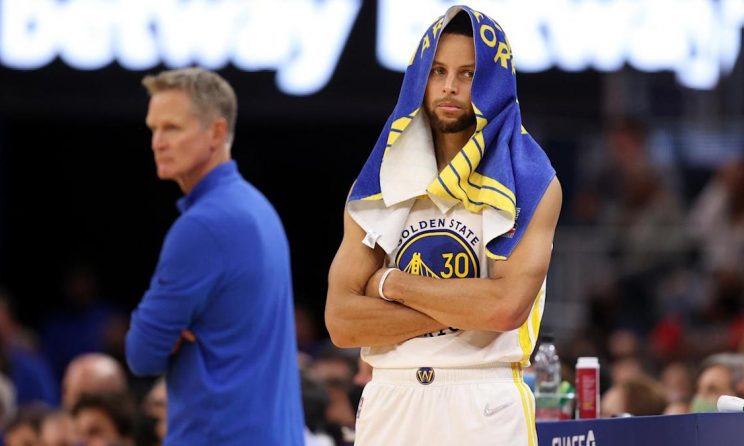 Warriors fans have gotten used to it, so when Curry doesn’t check back in around the six-minute mark in the second or fourth quarters, alarm bells go off.

In the Warriors’ 104-101 overtime loss to the Memphis Grizzlies on Thursday night at Chase Center, Curry checked back in with 4:32 left in the fourth quarter. Kerr had called a timeout with just under seven minutes left in regulation but he waited another two and a half minutes of game action before inserting the reigning NBA scoring champ back into a close game.

At both the 6:56 mark — when Kerr called the timeout — and the 4:32 mark, the game was tied. But Curry can do a lot of damage in an extra two and a half minutes.

After the Warriors’ first loss of the season, Kerr defended his decision to put Curry in later than he normally does, noting that he had no intention of putting his superstar back in when he called the timeout midway through the quarter.

“No. No. I mean, he played 19 minutes in the first half, which is pretty heavy,” Kerr said. “So I felt strongly about getting him some rest. He ended up, obviously with the overtime, at almost 41 [minutes]. And we don’t need that. Steph, over the course of 82 games, we’ve got to manage his minutes well.”

Though he didn’t score in the fourth quarter or overtime, Curry finished with a game-high 36 points in 40:40 of playing time. After the game, he wasn’t in the mood to blame his playing time in the final period for the disappointing home loss.

“That’s not why we lost,” Curry told reporters. “Obviously for most of the game, we had some pretty good momentum, our rotation patterns were pretty consistent and obviously I want to be out there but we understand the big picture. But this game, we had opportunities to close it out and we just didn’t, so I don’t want that to be the narrative of why we didn’t win. We’ve got to execute better, especially down the stretch. But in a game like this, a team coming off a back-to-back, and the way we started the game, honestly, I know it’s this league and they are talented, but that shouldn’t be the case, shouldn’t have to win it twice, and we put ourselves in that position.”

The Warriors built a 19-point first-half lead, but squandered it and ended up losing in overtime. If Curry had made one or two of his three fourth-quarter shots, the Warriors probably emerge with the victory and no one is worried about his playing time late in the game.

Last season, Curry averaged 34.2 minutes per game over 63 contests. So far this season, he’s averaging 36.4 minutes in five games. Kerr knows the Warriors are aiming for a long playoff run, so he needs to manage the 33-year-old’s minutes early in the season. The goal probably is to get his minutes per game down over the course of the season. Nearly 41 minutes Thursday didn’t help the cause.