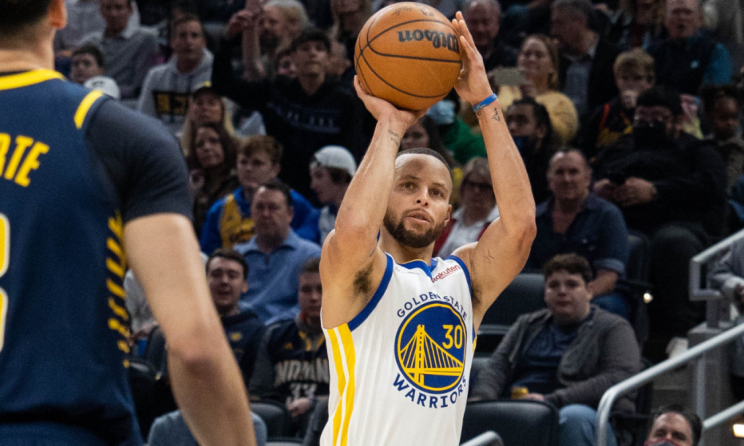 The birth of Stephen Curry the superstar happened on Feb. 27, 2013. That night, inside of Madison Square Garden, in a nationally televised game, Curry, who at the time wasn’t even an All-Star and in fact was less than a year removed from the ankle surgery that we now know probably saved his career, went for 54 points in one of the most breathtaking shooting displays you’ll ever see.

It didn’t matter that the Warriors lost to the Knicks. That night, Curry, on the most hallowed of basketball grounds, transcended the game that he was, unbeknownst to us, on the cusp of completely changing. Almost a decade later, Curry, with 2,927 3-pointers, is just two triples shy of breaking Ray Allen’s career NBA record.

And where will it likely happen?

That’s where the Warriors will take the court on Tuesday night against the Knicks. With Curry averaging 5.4 made 3-pointers per game this season, a career-high, Allen’s mark is almost a lock to fall, and when it does, all the talk will be about Curry’s legacy as arguably the most revolutionary basketball player of all-time. Our Bill Reiter will be getting into all that.

But I’m here to say something different: For the purposes of right now, Curry needs to get this record behind him as soon as humanly possible, because he, and by extension the Warriors, are playing some pretty shaky basketball in pursuit of it.

“Let’s be honest, there’s a lot of hype around this record, and sometimes that gets everybody rushing, playing out of your skin a little bit,” Curry said after Golden State’s pretty ugly 102-100 victory over the Pacers on Monday night. “We had to remind ourselves how we create offense and how we play.”

In the win on Monday, Curry shot 5-of-15 from 3. It’s a testament to his greatness that on a cold night, with Indiana running two and often three defenders at him everywhere he turned, Curry can still go for 26 points, but with seven turnovers and a barrage of errant shots, he did not play anything close to well by his standards. It’s been this way, really, since the breaking of this record hit the radar in earnest.

It started last Wednesday vs. the Blazers, when Curry was 16 shy of Allen’s mark. It is, by any logical standard, ridiculous that we all thought there was a real possibility Curry would hit 16 freaking 3s in a single game (Klay Thompson’s NBA record is 14, and Curry’s career-high is 13), but as LeBron James said, this speaks to Curry’s greatness that no shooting feat, however absurd, can ever truly be ruled out.

It didn’t happen, of course. Curry shot 6-for-17 from 3 that night, and over his last three games he has chucked up 46 3-pointers, making just 14, which is the same amount of turnovers he has logged in that span. Over his last seven games, Curry has made a dismal 34 percent of his shots, including 35 percent of his 3s.

He got put in the Mikal Bridges and Matisse Thybulle blender. He’s been sloppy with the ball, clearly pressing and out of rhythm. A season-long theme, he has rarely attacked inside the arc (though he did do a bit more of that on Monday, albeit without very much success), instead opting to force frustrated 3s as the pressure of the record and opposing defenses has perhaps worn him down.

In the process, the Warriors, who had lost just two of their first 20 games, have lost three of those seven contests, and even the wins have been ugly, as was the case against Portland and certainly Monday night in Indiana. Since losing to Phoenix two weeks ago, the Warriors have the 22nd-ranked offense in the league and the second-highest turnover rate, per NBA.com.

So the record is all well and good. It’s obviously a monumental achievement for Curry, who deserves every bit of the adulation he’s going to get, and the NBA surely loves that it’s almost certain to happen at Madison Square Garden on national TV. But deep down, Curry and the Warriors are going to be happy when it’s over so they can get back to playing normal, agenda-free basketball.