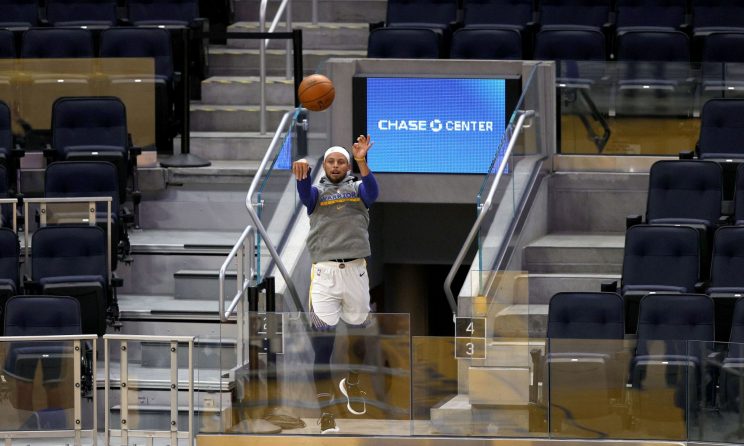 Before the Golden State Warriors tipped off against the Denver Nuggets for their first game of the 2020-21 preseason, Stephen Curry debuted a new pregame tunnel shot.

Over his career at Oakland’s Oracle Arena, Curry developed his pregame tunnel shot into a fan favorite in the Bay Area.

With Golden State’s move to Chase Center in San Francisco, the two-time Most Valuable Player debuted a new shot to close his pregame warm-up. After finishing his shooting routine on the court with a trick shot that featured Leandro Barbosa, Curry made a trip through the tunnel into the stands.

From the first row of the elevated rows of seating, the Warriors point guard launched a difficult deep shot from a unique angle that swished through the net.

After the game, Curry called his pregame tunnel shot from the stands of Chase Center, “a tough act to follow.”

That stuff just kind of comes to you. I don’t know — it was good adrenaline, good mojo. It’s going to be a tough act to follow, though, don’t get your hopes up.

Curry followed his new signature pregame shot with 10 points on 3-of-10 shooting from the field. The 32-year-old added three assists, two steals and a board in 21 minutes during Golden State’s 107-105 victory over the Nuggets.

To see if his pregame heave is a good luck charm, the six-time All-Star will need to break out the shot from the stands before Golden State’s next game during the regular season. If the Warriors register another victory, Curry’s new shot could become a staple at Chase Center.

Reaction and Stats: Warriors hold on late for first win of preseason vs. Nuggets, 107-105