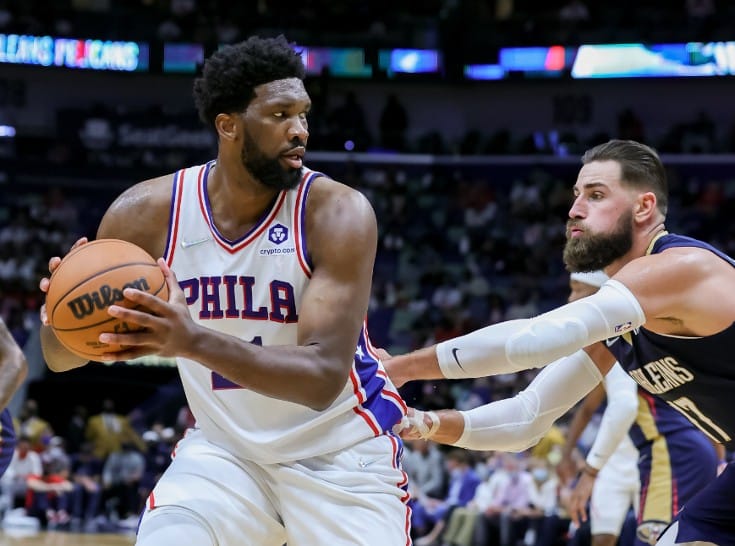 In tonight’s interconference rematch, the New Orleans Pelicans (18-28, 21-24-1 ATS) are playing the Philadelphia 76ers (27-19, 24-22 ATS); NBA picks are posted here. Will Joel Embiid and the Sixers win another game against the Pelicans in Tuesday night’s contest? In addition to the starting lineups, our top NBA picks and betting trends are available below.

All Pelicans vs 76ers betting odds can be found at BetOnline

Moreover, on Monday, in the Pelicans’ 117-113 home win over the Pacers, guard Devonte’ Graham led his team in scoring, finishing his performance with 25 points in 35 minutes spent on the court. Guard Josh Hart added a double-double to his career total, amassing 22 points, 10 rebounds and 2.0 assists in 36 minutes played. Nonetheless, New Orleans has won five of its past 10 games. After earning this victory, the team is 11-11 at home, 7-17 away and 8-16 ATS on the road this season.

Meanwhile, in the 76ers’ 115-109 road win versus the Spurs on Sunday, center Joel Embiid earned yet another double-double. He accumulated 38 points, 12 rebounds and 6.0 assists in 32 minutes of action. Tobias Harris and Tyrese Maxey both closed out their performances with 18 points as well. Philadelphia has won seven of its previous 10 games. With this win, the Sixers are 17-9 away, 10-10 at home and 8-12 ATS at home.

Per ESPN’s Basketball Power Index, the 76ers have a 64.9% probability of winning.

Upon further review of other matchups, in the last three head-to-head meetings, the 76ers are 2-1 against the Pelicans. On Oct. 20, 2021, the first time these teams met during this regular season, Philadelphia won 117-97 at Smoothie King Center. They have dropped a few games every here and there, but the 76ers have their number. The Pelicans have not defeated the Sixers since Apr. 9, 2021, when they won 101-94 at Smoothie King Center.

On another topic, a report regarding Ben Simmons surfaced yesterday evening. According one league source, the individual said, “No one is giving up three picks and an A-level player, who may be a B next to Joel, just to get Ben back.” This news can mean a lot of things. However, one might argue that this particular story is well beyond the point of tiresome and ridiculous. The 76ers organization had various opportunities to trade their star point guard during the summertime of last year, but general manager Elton Brand is still demanding a king’s ransom in return.

“No one is giving up three picks and an A-level player, who may be a B next to Joel, just to get Ben back,” a league source said.

James Harden or bust? Sources indicate the #Sixers are all-in even if it means prolonging the Ben Simmons saga https://t.co/yOPZB4xJPk

The Pelicans are not hopeless, though. If Brandon Ingram can play against the Sixers, his team will have an increased chance of covering the spread and maybe even pulling off an upset. All things considered, gamblers may choose to play it safe. Pick the 76ers to win, they will cover the spread and the total will go over 216. If you have never placed a bet on an NBA game, read our handicap betting guide. Other NBA Picks are on the main page.