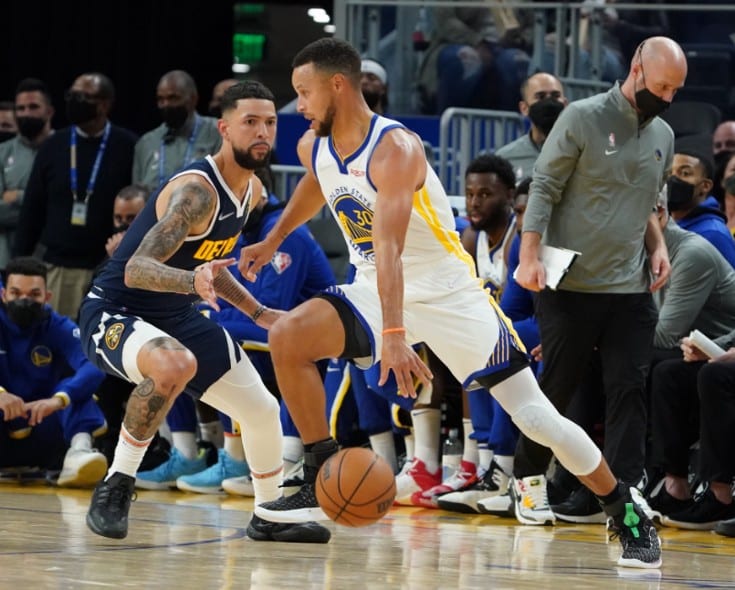 In tonight’s Western Conference battle, the Denver Nuggets (32-25, 26-31 ATS) are facing off versus the Golden State Warriors (42-16, 29-25-4 ATS); NBA picks are posted here. Will Nikola Jokic and the Nuggets win their third consecutive game? Including the starting lineups, our top NBA picks and betting trends are featured below.

All Nuggets vs Warriors betting odds can be found at BetOnline

Anyways, in the Nuggets’ 121-111 home win over the Magic on Monday, center Nikola Jokic added one more double-double to his career total. He earned 26 points, 15 rebounds and 7.0 assists in 35 minutes spent on the court. Also, Jeff Green and Will Barton each closed out their performances with 17 points. Denver has won six of its last 10 contests. Having won back-to-back contests, they are now aiming to win their third straight game. The team is 16-15 away, 16-10 at home and 15-16 ATS on the road.

Additionally, on Monday, in the Warriors’ 119-104 road loss versus the Clippers, guard Stephen Curry scored a team-high 33 points in 34 minutes of action. Andrew Wiggins and Jordan Poole each contributed 13 points as well. Golden State has won seven of its previous 10 games. Though, the Warriors have lost there out of their last four contests. They are 26-5 at home, 16-11 away and 17-12-2 ATS at home this season.

Referring to ESPN’s Basketball Power Index, the Warriors have a 56.9% chance of winning.

Regarding Warriors’ center James Wiseman, he practiced in the team’s five-on-five scrimmage on Tuesday. It was the first time he participated in a scrimmage since his knee injury. According to the injury report, he remains out indefinitely. But, the second-year player is showing progress. It is possible the center will return to the court after the All-Star break.

Can confirm that James Wiseman will advance to 5-on-5 scrimmaging today for the first time since his injury. It’ll consist of a mix of some of the Warriors’ young players, coaches, staffers at the SF facility. Bob Myers first told @MorningRoast957 of the plan this morning.

Entering tonight’s rematch, Golden State is a 5.5-point favorite at home. Denver won a low-scoring contest against them back in December. Nonetheless, Klay Thompson missed the game because he was still recovering from his ACL injury. Therefore, pick the Warriors to win, the Nuggets will cover the spread and the total will go under 224. If you have never placed a bet, read our handicap betting guide. Other NBA Picks are on the main page.