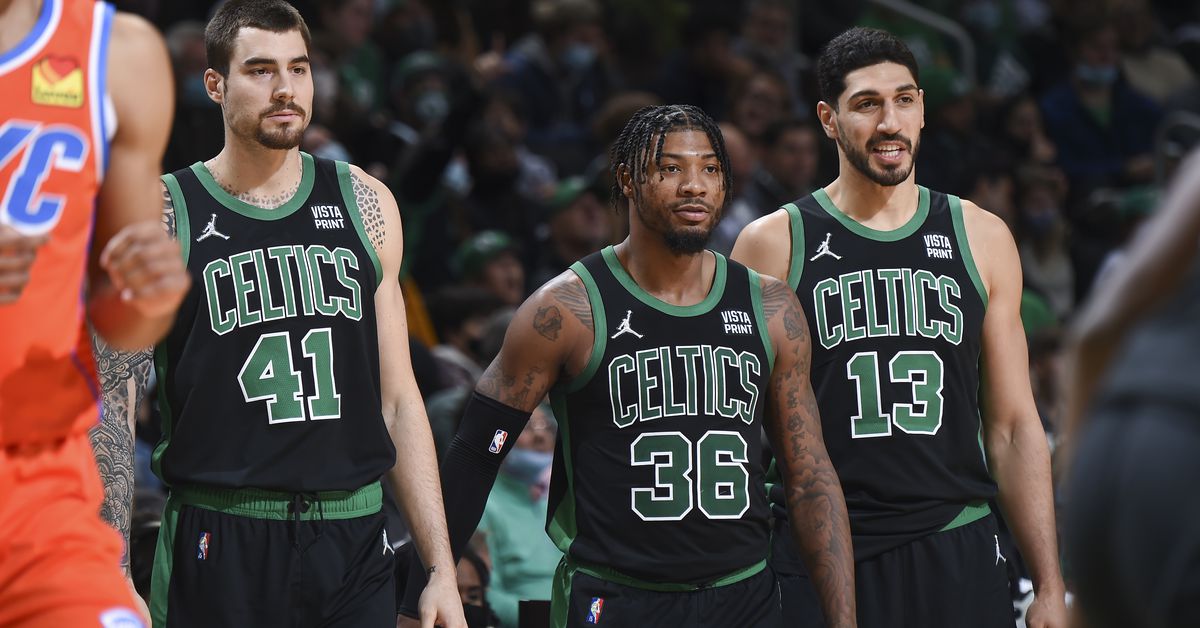 Enes Freedom: There are numerous things Enes could improve upon, but the main thing he’s regressed in is his ability to reign in the ball. As a big man who relies on post scoring and offensive rebounding, you can imagine how the recent stretch of butterfingers affects his value to the Celtics. In order to stay a viable NBA rotation player, Enes needs to work on his hands more to try and get back to being a second-chance machine that provides instant offense. It feels like this year he’s lost a step offensively, and has numerous instances where poor hands lead to a turnover or a bad possession.His 2point field goal percentage is the lowest its been since 2014-15, and his percentage from 0-3 feet (57.4%) is the worst of his career. Simply put, Enes needs to stop working his Twitter fingers and start securing passes and offensive rebounds better if he wants to provide the Celtics some juice. He’s shown well in (brief) spurts this year, but overall it has been a disappointing season for the 11-year vet. – Michael Pearce

Juancho Hernangomez: Juancho Hernangomez hasn’t been a staple in Boston’s rotation this season, but his opportunities have increased since the recent surge of COVID-related absences. Unfortunately, Hernangomez is a combined -21 in the three games he’s earned over 10 minutes this season. A big part of that is a complete lack of awareness on the defensive side of the ball. On a Celtics team that is attempting to pride itself on that end, Hernangomez constantly finds himself getting lost and making the wrong decisions.The prime example of this came against the Milwaukee Bucks. At the end of the half on Christmas Day, Hernangomez chose to play help defense instead of guarding the corner with three seconds left. This allowed George Hill to nail a buzzer-beater three in a game where the C’s lost by four.His resolution could have easily been about his poor shooting numbers or a variety of other topics, but it all starts on defense for this Celtics team. – Jack Simone

Jabari Parker: Lateral quickness. In the 21 games Jabari Parker has played in a Celtics uniform, he’s been wildly efficient offensively, putting up shooting stats bordering on 50-40-90. We’ve always known Jabari can put the ball in the hoop at a high level, but he’s given those points back to his opponent on the other end. Hampered by two ACL surgeries on the same knee early in his career, it’s been nearly impossible for Parker to reclaim the athleticism that made him a top-two pick in the NBA draft once upon a time.

Guys don’t get more athletic overnight, nor do they suddenly find the competitive drive to overcome their limitations on every single possession. But if Boston is going to make the decision to keep Parker through this season and beyond, he’ll need to show that he’s capable of making a defensive impact. What’s best for Parker is playing at the 5, where his lack of quickness isn’t exposed as frequently. But on a Celtics team that likes to switch everything and a roster already stuffed with serviceable bigs, Parker feels buried in a situation that isn’t built for him. – Adam Spinella

Bruno Fernando: He isn’t exactly a veteran, but he’s not really part of Boston’s young core either. However, in these first few months of the new year, Fernando could be relied upon like a nine-year pro. With players like Aaron Nesmith, Romeo Langford, and Payton Pritchard, the Celtics can afford to be patient with their development. With Fernando who’s in his final season of his rookie contract, the rope is shorter. He won’t get a chance (and if we’re being honest, be expected) to get better in season. For 2022, his resolution is readiness. He’s still the fifth big in the rotation but depending on injuries and COVID protocols, he could be called upon to provide his brand of high energy basketball in a moment’s notice. – Bill Sy