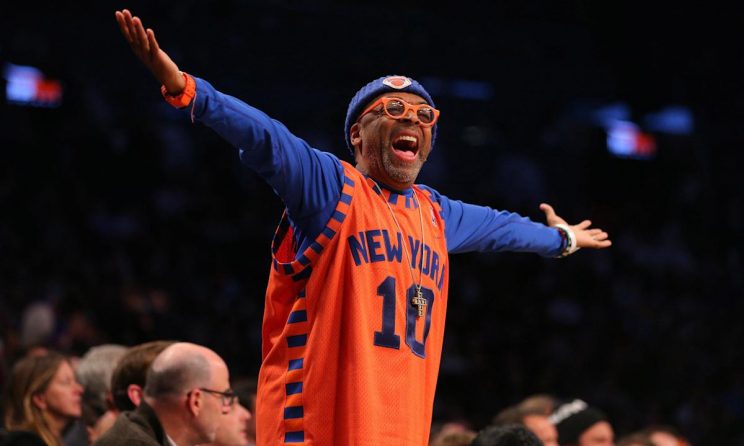 NEW YORK – On Feb. 25, 2017, the Nets were starting the second game of an eight-game road trip at Oracle Arena in Oakland, California, with a starting lineup of Brook Lopez, Joe Harris, Rondae Hollis-Jefferson, Randy Foye and Jeremy Lin. Their opponent was the Golden State Warriors, who would eventually win their second NBA championship in three years.

The Nets were dominated from start to finish, losing their 16th straight game and cementing their status as the league’s laughingstock. On the back pages of the New York City tabloids and on sports talk radio, the chatter was even worse.

No, the Nets weren’t tanking, Philadelphia 76ers style, where “The Process” took years to see any results. The Nets played hard; they just weren’t considered very good. There was blame to go around. But who would think that in a short 18 months after that disaster in Oakland, the dominoes would fall in place and lead to the league’s latest super team?

Joe Harris (center) and the Brooklyn Nets have bigger ambitions than the battle with the Knicks for the NYC fanbase.

The climb up to join the NBA’s elite and to slowly take hold and win over a basketball-crazed town would be arduous, especially as the crosstown Knicks are making their own headlines for playing winning basketball.

The Knicks surprised the league last season going 41-31, breaking an eight-year playoff drought before being eliminated in the first round by the Atlanta Hawks.

Other than Nets forward Kevin Durant answering a fan’s Instagram post last spring, saying he would “love” for the two teams to meet in a playoff series, muted voices have been the norm on a potential rivalry.

Add to the fact that both Kyrie Irving and Durant spurned advances from the Knicks when both were free agents — upsetting that rabid, loyal fan base — and you have the makings of a heated conflict that could stretch for years.

It also should be noted that the Nets also made a play for Knicks superfan Spike Lee. After Lee said he was being harassed by the Knicks during the 2019-20 season, Lee told the New York Times that he’d received an entreaty from Brooklyn. “My office is in Fort Greene. Barclays [Center] is four blocks away,” Lee told The Times. “But I respect them. I’m not going to let anybody take away my love for the orange and blue skies. It’s not happening. I wish the Nets luck. But that ain’t happening.”

So far both teams have bigger goals than the so-called “Battle of New York.”

The Knicks retooled and reloaded during the offseason, signing Julius Randle, the league’s Most Improved Player, to a four-year, $117 million contract extension and acquiring hometown hero Kemba Walker to add scoring punch to a squad that ranked 23rd in offensive rating, true shooting percentage and effective field goal percentage.

“We really have a team, we have a lot of weapons, that’s good, that’s what you need,” Knicks guard RJ Barrett said. “You know every night is going to be different, every night it’s going to be somebody contributing in a different way.”

But these Nets are also different. Just like the Knicks, they did not speak one word about the crosstown rival or any of the other 28 teams for that matter during the team’s media day.

The only concern for the Nets in terms of other teams came outside of the Barclays Center in a promotion where a sign flashed announcing ticket availability for some of the biggest home games in the first half of the season. Those would be the Warriors, Suns, Knicks, Bucks and Lakers.

As with every NBA team, the goal is a single-minded focus: The Larry O’Brien trophy, which now is in the possession of the Milwaukee Bucks.

“It’s not about anyone else but us,” said guard James Harden, who averaged nearly 25 points per game last season. “If we take care of our business and approach the game and each day like we know we are going to, we’re not worried about anyone else.”

But that may be difficult if Irving remains unavailable. . The Nets said Irving won’t be allowed to practice or play in games until he either gets vaccinated or New York City drops its vaccine mandate.

“That’s on Kyrie and that’s his personal decision. What he does is not on us to speculate what may happen,” Durant said. “We trust in Kyrie, and I expect us to have our whole team at some point.”

While Irving’s status plays out heading into the regular season, the Nets say they have let go of the sting of last season’s early exit from the playoffs.

After the team’s seven-game second-round defeat to the Bucks — which was played without Irving and had a hobbled Harden for most of the series — the Nets vow that when their Big Three is healthy, there is no team in the NBA that can beat them. That remains to be seen, but the front office made sure they had enough pieces to push for a deep playoff run.

“I like the roster,” Durant said. “I like that we have a lot of veteran guys, mixed in with a couple of young guys who are hungry for this experience in the NBA. We want to keep building this culture. What we have on paper is cool, but we still have to get out between the lines and play.”

While the consensus is Brooklyn has the world’s best player in Durant, the key may be Harden, who forced his way out of Houston and is taking no pleasure he is without a ring.

Harden and Irving could test the market and become free agents next summer or sign extensions before then and continue the championship race, as Durant signed a four-year, $198 million extension in August.

“It’s not about the money for me,” Harden said. “I’ve been on enough teams where we fell short. So, my mindset and my goal is to make sure we’re able to build and continue to build this team to be able to compete as a team for multiple, multiple years at the highest level. Win a championship in New York, the money will come.”

Harden seems far removed from the lingering hamstring issue that forced him to miss three games in the second-round series against the Bucks.

When asked what that meant, the six-time first-team All-NBA selection said when his health is not an issue, the Nets simply can’t be beat.

And they may not have to play a lick of defense to get there. Last season, Brooklyn was the league’s most efficient offensive team, ranking first in offensive rating and field goal percentage and second in points per game.

“It’s even scarier. Just because some of the pieces we added to this team. We have more confidence,” Harden said. “I’m trying to set myself up because I have fell short a few times, but that doesn’t stop me and it won’t stop me. I train every single day with that mindset to be able to compete at the highest level and be the last team standing.”

For the new-look Knicks and Nets, talking season is over and now begins a grueling campaign with the hopes of bringing an NBA championship to the city for the first time since 1973.

Randle did not want to put any expectations on how far his team will go, so if the goal is championship or bust, he is keeping quiet about it.

“For me, for our team, it’s just getting better every day, continuing to develop as individuals. Develop as a team. I think the biggest thing last year is we came in and did the right things and we created those good habits.

“We had a belief that we could win every night,” he said. “That doesn’t change.”

This article originally appeared on USA TODAY: Battling Knicks for NYC is nice but Nets’ bigger challenge is for NBA title