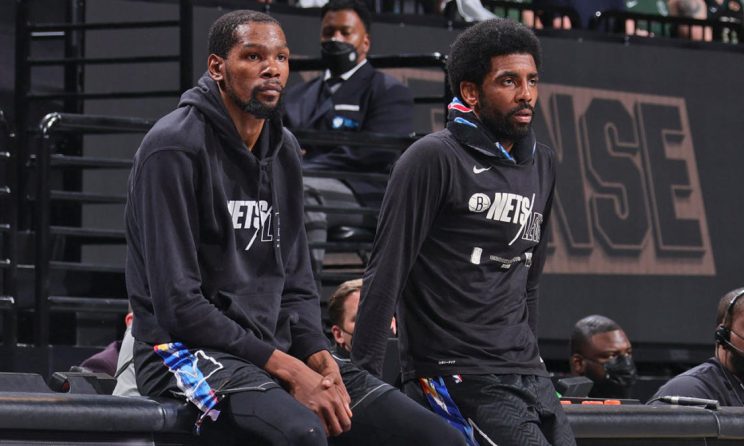 After sitting out the first 35 games of the season, Brooklyn Nets star Kyrie Irving returned to action earlier this week against the Indiana Pacers. But when the Nets returned home on Friday night for a big matchup with the defending champion Milwaukee Bucks, Irving was once again absent because he remains unvaccinated against COVID-19.

Irving’s absence was felt, as the Nets never led in the game and lost by double-digits to the Bucks for the second time this season. But despite the issues that Irving’s decision is causing for the Nets, Kevin Durant said he will not try to pressure his teammate into getting the vaccine.

“I told him how important he is, how much I want him to play — play every game,” Durant said. “But I’m not about to force somebody to get a vaccine, like that’s not my thing. So he can play basketball? Nah, I’m not about to do that.”

“We’ve had conversations about wanting him to be a part of the team and conversations about him being here full-time, but that’s on his time,” Durant continued. “Whatever decision he want to make, he’s going to make. It’s on us to be professionals no matter what, and do our jobs. All of us — from the owner down to the equipment manager — so whenever he ready, he’ll be ready.”

Due to New York City’s COVID-19 mandate, which bars unvaccinated persons from entering Barclays Center, Irving cannot play in the Nets’ home games. Because the NBA does not force players to be vaccinated, Irving has been eligible to play in road games in most cities all season long. However, the Nets initially did not want him participating as a part-time player, which is why he wasn’t playing at all.

But with injuries and the recent COVID-19 surge robbing them of any sense of continuity or cohesion, they changed their stance and welcomed Irving back into the fold. Ironically, he tested positive almost immediately, and then had to go through a return to play progression to make sure he was physically ready to go. Due to his inability to play at home, Irving won’t be able to suit up again until Monday.

If there’s any sort of silver lining for the Nets, it’s that 14 of their next 19 games will be on the road. Irving won’t be able to play against the Warriors because of San Francisco’s local COVID-19 mandate, but that’s still plenty of games for him to get a rhythm and help the team pick up some much-needed wins.

But while having Irving out there for some of the games is better than nothing at all, Friday night’s loss to the Bucks was a reminder of the trouble they’ll face in the later rounds of the playoffs if Irving doesn’t get vaccinated.

“I haven’t even asked for an explanation,” Durant said. “It ain’t my place I don’t think. So I’m ready for whatever, that’s been my whole mentality. Whatever happens in this situation, I got to still be me, still go out there and represent the way I represent. I’m supporting whatever my team needs me to do, wants to do.