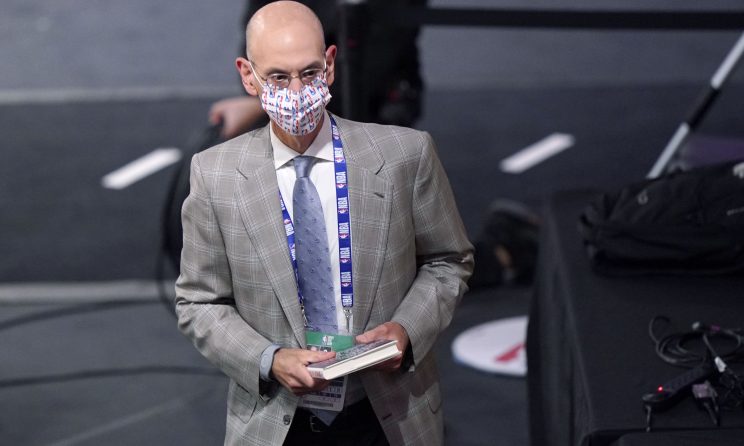 Similar to just about every major sports league in the United States, the NBA had a brutal year financially.

How bad? The league reportedly came in $1.5 billion under revenue projections. None of that is surprising, as we all saw in real time how the coronavirus pandemic shut the league down for months and prevented a single fan from walking into an arena after mid-March, but that won’t make NBA commissioner Adam Silver’s job any easier.

And apparently even more pain could be on the way.

If the start of the 2020-21 season is pushed back until January, the NBA fears a revenue loss of $500 million to $1 billion next season, according to ESPN’s Adrian Wojnarowski. The league is reportedly also facing $4 billion lost if fans are not allowed back into arenas, which seems possible due to certain teams’ local laws forbidding public gatherings and the indoor nature of basketball arenas.

Obviously, that’s bad. That kind of loss would be felt by both the league and the players via their revenue sharing CBA, and both parties are currently ironing out the details that could supposedly be less than two months away.

Per ESPN, the league and union pushed back a deadline until next Friday that would allow the NBA to officially terminate the CBA due to the pandemic. That gives them about a week to pick the least painful option before them.

When will the NBA season begin?

No fans and a late start for the NBA would be bad. Really bad. (AP Photo/Mark J. Terrill)

For a while, it seemed widely expected that the NBA’s next season would begin well after New Year’s Day. The 2020 NBA Finals ended in mid-October, and it seemed unthinkable that the league would ask some teams to return to the court on just two months of rest.

One report indicated the NBA was discussing a start date around Martin Luther King Day, but the league soon started pushing for Dec. 22 to be the date. What changed? Well, maybe they finally calculated how much pushing the season to January would cost them.

The league office reportedly informed the Board of Governors last week that it intends to schedule a 72-game season beginning in December (with training camps beginning around Dec. 1) and ending before the Summer Olympics in late July. A play-in tournament for the final playoff seeds is also reportedly on the table.

Per Wojnarowski, the NBPA is opposing that plan and has counter-proposed a mid-January start. NBPA executive director Michele Roberts has reportedly expressed doubt of the December plan due to the extreme turnaround between the Finals and training camp. The NBA’s plan would give Los Angeles Lakers and Miami Heat players only 51 days of rest between their last game and the start of camp.

Lakers guard Danny Green has already said not to expect seeing LeBron James in the first month of the season with a December start:

“If we start in December, I think most guys [are like], ‘I’m not gonna be there,’” Green said. “If I had to guess, because we have a lot of vets on our team, it’s not like we have a lot of young guys or rookies … to have that quick of a restart, I wouldn’t expect to see [LeBron] there. I wouldn’t expect to see him probably for the first month of the season. He’ll probably be working out with us, probably do some playing, but I just don’t expect guys to want to be there, or show up willingly.

On the other hand, the NBA fears that extending the season past the Olympics and well into the summer again would caused another brutal year for league ratings, as we saw this year. The NBA is trying to get back onto its usual schedule after four months of inaction, but getting there is going to take shorter offseasons and/or fewer games played during the season.

The nuclear option is the aforementioned termination of the CBA, which would almost guarantee no basketball played for a while.