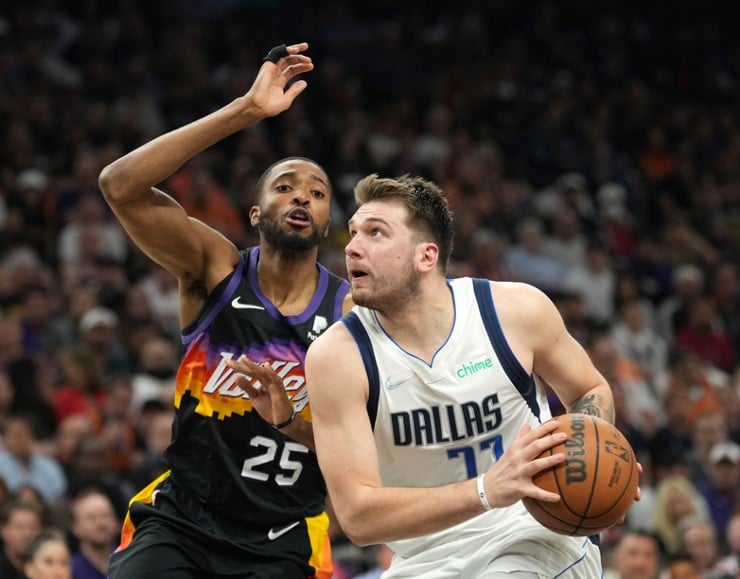 On Friday, the second round of the 2022 NBA Playoffs continues; free NBA playoffs conference semifinals odds, Game 3 picks and predictions are posted here. Our analysts at Basketball Insiders have selected the winners of the two matchups tonight.

Today, May 6, the NBA playoffs second-round doubleheader can be watched live on TNT. To kick off the Game 3 schedule, the Miami Heat square off versus the Philadelphia 76ers at 7 p.m. ET. Then, the Phoenix Suns take on the Dallas Mavericks at 9:30 p.m. ET.

As of right now, BetOnline oddsmakers could not determine a clear favorite in either contest. Thus far, the 76ers have been outmatched without Joel Embiid. However, the five-time All-Star could be cleared to return for Game 3 or 4. He is still recovering from an orbital bone fracture.

Heading into Friday night’s conference semifinals rematch, the 76ers are striving to win a game against the Heat. On Wednesday, Miami bested Philadelphia 119-103 at home. Bam Adebayo led his team in scoring with 23 points. Not to mention, Jimmy Butler closed out his performance with another double-double. He amassed 22 points, six rebounds and 12 assists in 37 minutes played. The Heat outscored them 59-51 in the second half.

For Miami’s injury report, the team has two players listed: PG Kyle Lowry (out) and C Dewayne Dedmon (out). So far, the Heat are in full control of this series. They are on a four-game winning streak. The team is 11-3 ATS in its last 14 games played. Plus, the total has gone under in six of Miami’s past seven contests. If the Heat can win Game 3, this series will be over.

Moreover, according to the 76ers’ injury report, the only player listed is Joel Embiid. He is listed as out for this contest. It is unknown whether or not the center will be cleared to play for Game 3. Realistically, a better estimate for his return is Game 4. Though, if the Heat win this third matchup, the 76ers would have to overcome a three-game deficit with Embiid. That’s unlikely.

Additionally, the 76ers are 1-4 ATS in their previous five games played. The total has gone under in five of Philadelphia’s last seven contests as well. All things considered, the 76ers are the best bet to win Game 3, they will cover the spread and the total will go over 210.5. This series shouldn’t be a sweep. More NBA playoffs conference semifinals odds, Game 3 picks and predictions are on the main page.

Lastly, the Suns lead their second-round series by two games over the Mavericks. In Game 2, Phoenix defeated Dallas 129-109 at home on Wednesday. Devin Booker scored a team-high 30 points for the Suns. Chris Paul also put up 28 points in 36 minutes played. Needless to say, the Suns were on fire offensively. They shot 64.5% from the field and 52% from downtown.

Next, regarding the Suns’ injury report, the only player they have listed is forward Dario Saric. He is out for Friday night’s contest. Now, Phoenix is 11-0 versus Dallas in its last 11 head-to-head matchups. When will the Mavs win a game against them? The Suns are 9-2 ATS in their previous 11 meetings against the Mavs, too. Simply put, Dallas cannot compete with Phoenix.

On the other hand, guard Tim Hardaway Jr. is the one player the Mavs have listed on their injury report. Hardaway Jr. remains out. After losing a total of 11 consecutive games versus the Suns, quite a few bettors are expecting a sweep in this series. Nonetheless, Dallas is 8-1 at home in its past nine games played. While the Mavs might still struggle to beat the Suns at American Airlines Center, this is their best opportunity to obtain a victory.

Besides stating the obvious at this point, keep in mind that Dallas is 5-2 ATS in its last seven contests. The team can upset the Suns in one of these games. Will it be for Game 3? That is up for all risk takers to decide. In short, pick the Mavericks to win, they will cover the spread and the total will go over 219.5. Other NBA playoffs conference semifinals odds, Game 3 picks and predictions are on the main page.

BetOnline is one of the best sportsbooks in Arizona, Florida, Pennsylvania and Texas.