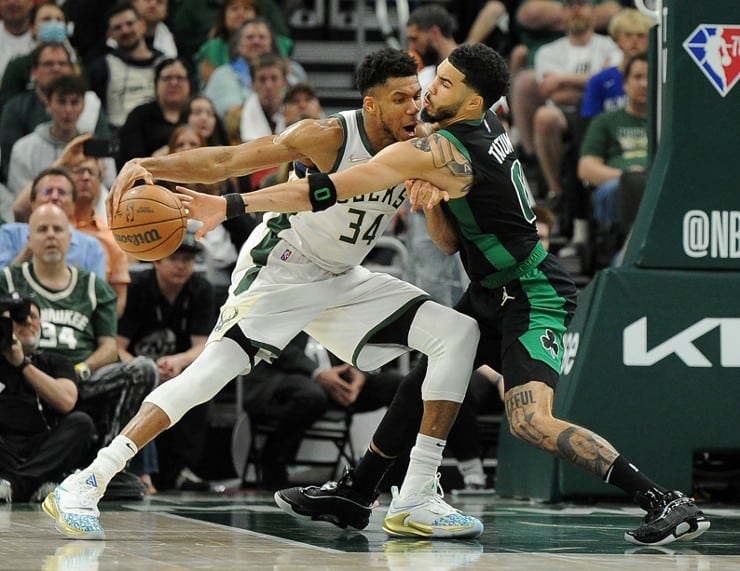 On Wednesday, the second round of the 2022 NBA Playoffs continues today; NBA player props, best NBA bets and odds for Game 5 of the conference semifinals are featured here. For the Eastern Conference Semifinals, the Milwaukee Bucks take on the Boston Celtics at 7 p.m. ET. Then, the Golden State Warriors face off versus the Memphis Grizzlies at 9:30 p.m. ET in the Western Conference Semifinals.

These two contests can be watched live on TNT. BetOnline odds, NBA player props and best NBA bets for Game 5 of the second round of the playoffs are available below. YouTube TV and Hulu with Live TV offer free trials for streaming. With DIRECTV STREAM, if you cancel within 14 days, you will receive a full refund. Other NBA betting picks and sports betting content is on the main page.

To kick off the Game 5 second-round bets, our analysts have picked the best NBA player prop bets for the Bucks-Celtics and Warriors-Grizzlies matchups. Along with the Celtics winning Game 5, will Jayson Tatum have at least 25 points at TD Garden?

Nex, can Giannis Antetokounmpo finish with a combined total of 52 for points, rebounds and assists? Will Jordan Poole end his performance with a minimum of five assists? Read the predictions below. Other NBA player props are on the main page.

First off, Celtics guard Jayson Tatum is averaging 22.5 points, 5.8 rebounds and 5.5 assists per game against the Bucks in this second-round series. In Game 1, the three-time All-Star put up 21 points in 40 minutes played. Of course, Boston lost that contest 101-89. Then, Tatum finished with 29 points in Game 2. The Celtics bounced back, winning 109-89. However, for Game 3, the fifth-year player only scored 10 points.

Not to mention, Tatum scored a series-high 30 points in Game 4. On Monday, the Celtics defeated the Bucks 116-108 at Fiserv Forum. Considering neither team has won two straight games against the other this series, bettors might decide not to entertain this prop bet. Though, the C’s have the advantage playing at home tonight. Tatum could easily finish with at least 25 points, which is why this is one of the best NBA player props for Game 5 tonight.

RELATED: NBA Playoffs Second Round Game 3 Picks and Odds (May 7)

NBA Player Prop Bets Today, May 11 — Giannis Antetokounmpo to have at least a combined total of 52 for points, rebounds and assists (-117)

Despite his total going under the 52 mark in the first two matchups, Antetokounmpo finished with 42 points, 12 rebounds and eight assists in Game 3. His total here is 62. For Game 4, the two-time MVP generated 34 points, 18 rebounds and five assists. His total came to 57. Since this series has been back and forth, it makes sense why bettors are expecting the Bucks to win tonight. But will Antetokounmpo score at least 30 points on the road?

Lastly, Warriors guard Jordan Poole is averaging 23 points, 5.3 rebounds and 5.3 assists against the Grizzlies in this second-round series. In Game 1, the third-year player ended his showing with 31 points, eight rebounds and nine assists. In the following contest, the guard finished with 20 points, three rebounds and five assists. The only time Poole failed to earn five assists this series was in Game 3.

Besides falling short one time, Poole put up 14 points, six rebounds and five assists in Game 4. Now that the Grizzlies are without Ja Morant, the Warriors have a slight chance of winning by at least double digits. Whether you choose a Stephen Curry, Klay Thompson or Jordan Poole prop bet tonight, just know that Draymond Green cannot be trusted to finish a full game. This is due to injuries and ejections.