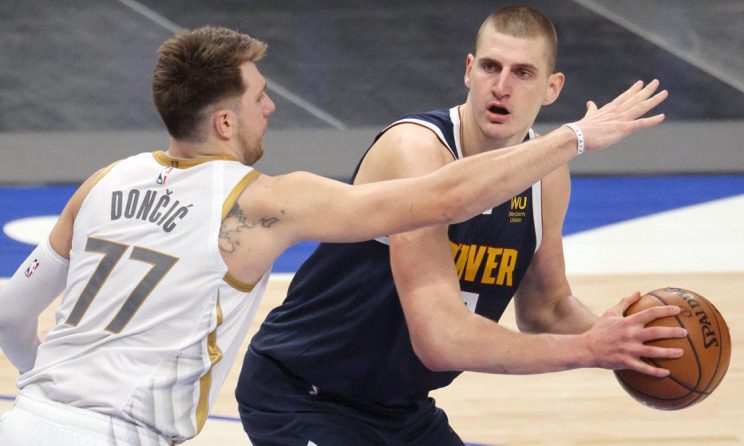 With Joel Embiid and Matisse Thybulle on the shelf for the Philadelphia 76ers (health and safety protocols), Philly is on a five-game skid and coming off their worst loss of the season. One player that has benefited from the extra opportunities but may be flying under the radar in the NBA DFS player pool is guard Tyrese Maxey. In the five games since Embiid and Thybulle have been out, he’s shot 51 percent from the field, hit 13-of-26 three-pointers and averaged 24 points per game.

On Thursday night, the 76ers have a tough matchup against Denver, and Maxey could be had at a discount on sites like FanDuel and DraftKings. The Nuggets have been strong on defense, but Tim Hardaway Jr. scored 19 points with seven rebounds against them on Monday and Denver gave up 21 points to CJ McCollum in the game before that. Can Maxey keep up his production against Denver and reward those that include him in their NBA DFS lineups on Thursday? Before making any NBA DFS picks, be sure to check out the NBA DFS advice, player rankings, stacks and top daily Fantasy basketball picks from SportsLine’s Mike McClure.

On Wednesday, McClure listed Mavericks guard Jalen Brunson as one of his top NBA DFS picks on FanDuel and DraftKings. The result: Brunson finished with 18 points, nine rebounds and nine assists to return 42.25 points on DraftKings and 39.3 points on FanDuel. Anybody that included him in their lineups was well on the way to a profitable day.

Now, McClure has turned his attention to the Thursday, November 18 NBA DFS slate and locked in his top daily Fantasy basketball picks. You can only see them by heading to SportsLine.

One of McClure’s top NBA DFS picks for Thursday is Denver center Nikola Jokic at $12,000 on DraftKings and $11,600 on FanDuel. Jokic is coming off of his biggest offensive night of the season on Monday, when he scored 35 points with 16 rebounds against Dallas.

Jokic’s numbers this season have been remarkably close to the ones that he put up last season en route to winning MVP honors. He actually comes into Thursday with a higher field goal percentage and more total rebounds per game than in 2020-21. He should have another nice showing tonight against a Philadelphia side that will be without Embiid for the sixth consecutive game.

Part of McClure’s NBA DFS strategy also includes rostering Spurs point guard Dejounte Murray ($9,800 on DraftKings, $9,900 on FanDuel). Murray has been on fire over his last two games. Against the Lakers and Clippers, he finished with a combined 48 points, 22 rebounds, 19 assists and six steals.

The Spurs play Minnesota on Thursday night, and the Timberwolves have struggled this season against scoring point guards. The opposing point guards in Minnesota’s last four games all scored at least 20 points in addition to their other offensive contributions. Murray has been close to a top-five Fantasy point guard all season and is playing his best ball ahead of a plus-matchup.

How to set NBA DFS lineups for Thursday, November 18