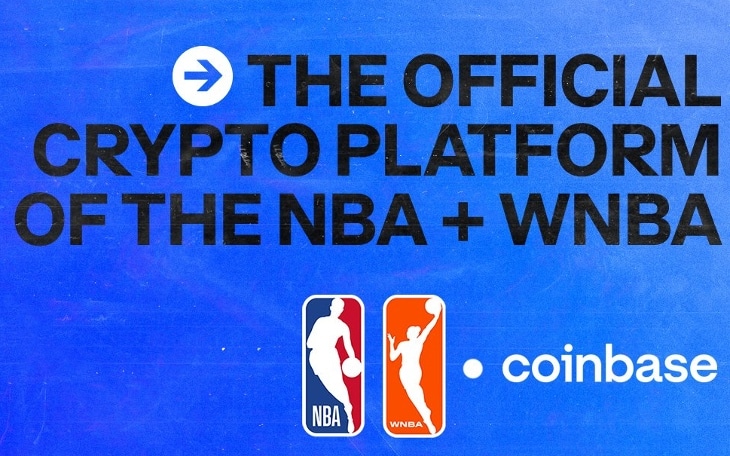 On Tuesday, NBA executives agreed to their first cryptocurrency sponsorship deal with Coinbase. This is a multi-year partnership deal. The American company announced their partnership with the professional basketball league on Twitter.

While the terms are undisclosed, one report confirmed that Coinbase will also acquire NBA G League, USA Basketball and WNBA branding. Plus, NBA 2K League is included.

Furthermore, this news comes one day after NBA Commissioner Adam Silver told media reports about the league’s projected revenue of $10 billion for the 2021-22 season. NBA marketing director Kerry Tatlock stated, “As a trusted cryptocurrency platform used by millions, Coinbase is a natural fit as the NBA’s first ever partner in this thriving category.”

One week ago, Dabber Labs partnered with Kevin Durant. This move was to help promote NBA Top Shot NFTs.

We’re excited to announce that as of today we are the official crypto platform of the @NBA, @WNBA, @NBA2KLeague, and @usabasketball. Let’s go! pic.twitter.com/QQMjjHNlra

Meanwhile, Coinbase chief marketing officer Kate Rouch also made a statement after this deal was announced. Rouch said, “As part of the partnership, we will create interactive experiences to engage with the NBA and WNBA’s incredible community and athletes around the world.”

Besides serving as chief marketing officer, Rouch worked as vice president and global head of brand and product marketing for social media sites. The NBA making their first cryptocurrency deal was a surprise. For some perspective, Bitcoin was founded in 2009.

History of Coinbase and products offered

Moreover, Coinbase Global, Inc. was founded on Jun. 20, 2012. Bruce Armstrong and Fred Ehrsam are the company’s founders. The American company was named after coinbase transactions. As of today, they serve over a hundred countries globally. The currency products they provide include Bitcoin, Bitcoin Cash, Ethereum, Lifecoin and exchanges of digital assets.

Likewise, the Coinbase app is used to either buy, trade or store the aforementioned cryptocurrencies listed above. Nowadays, they are a publicly traded company, and their market cap is approximately $64 billion. Their IPO date was Apr. 14, 2021. In 2020 alone, the company’s revenue increased by about $1.14 billion. Coinbase Pro is another choice. This is used for trading digital assets.

Furthermore, the company does not have a physical headquarters. However, their address on Google shows Wilmington, Delaware. The Nasdaq ticker symbol is “COIN.” The NBA is expected to advertise Coinbase during their 82-game season. The league’s 75th anniversary season kicks off tonight.

Additionally, Basketball Insiders is partnered with various Bitcoin betting sites. This includes popular sites, such as BetOnline, MyBookie and Bovada. Though, BetUS, Sportsbetting.ag and Intertops are other options.

BetOnline offers a 100% crypto bonus of up to $1,000. This serves as a welcome bonus for new gamblers. When making your first $20 minimum deposit, use promo code CRYPTO100. Don’t include the period.

Next, to add to the crypto bonus, Bovada is fantastic as well. A $20 minimum deposit will unlock a 75% match bonus up to $750. This is for Bitcoin, Litecoin and Bitcoin Cash. For Bovada, use promo code BTCSWB750. As stated before, don’t include the period.