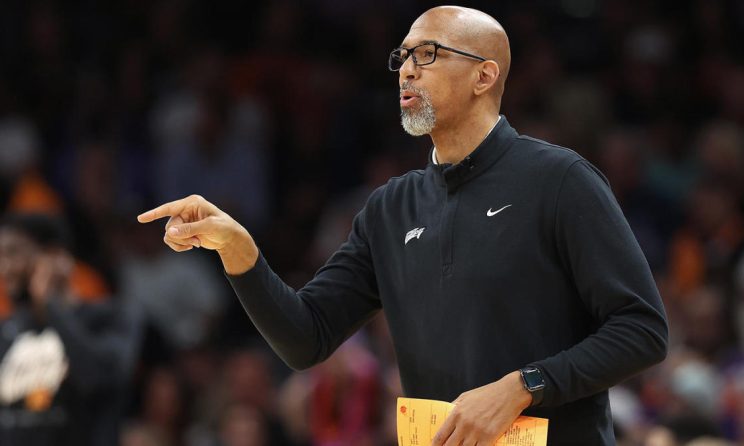 Monty Williams on Monday was informed he had been named the 2021-22 Coach of the Year, and Phoenix Suns guard Devin Booker let the cat out of the bag on social media. Williams will win the award after narrowly missing out a season ago. New York Knicks coach Tom Thibodeau won in the end with only an 11-point edge in the voting. This season, however, Williams’ case was almost unassailable.

He led the Suns to a league-best 64-18 record. He did so, unlike last season, with injuries all across the roster. Chris Paul, Devin Booker and DeAndre Ayton all missed meaningful time throughout the year and it didn’t matter. The Suns ultimately won eight more games than any NBA team and will have home-court advantage throughout the postseason.

Williams beat out Memphis Grizzlies coach Taylor Jenkins and Miami Heat coach Erik Spoelstra to win the award. None of the three finalists had ever won it. Williams is the first Suns coach to win it since Mike D’Antoni during the 2004-05 season. Three Suns coaches overall have won the award, with Cotton Fitzsimmons also doing so during the 1988-89 season.

Williams has led the Suns since the beginning of the 2019-20 season, and they have steadily improved under his watch. They went undefeated in the Orlando bubble before reaching the NBA Finals last season following the acquisition of Chris Paul. Now, with Williams leading the way, the Suns are the favorites to win the 2022 championship. Williams has one trophy in the bag, but now, he’s going to keep pushing for the bigger one waiting for him at the end of the season.