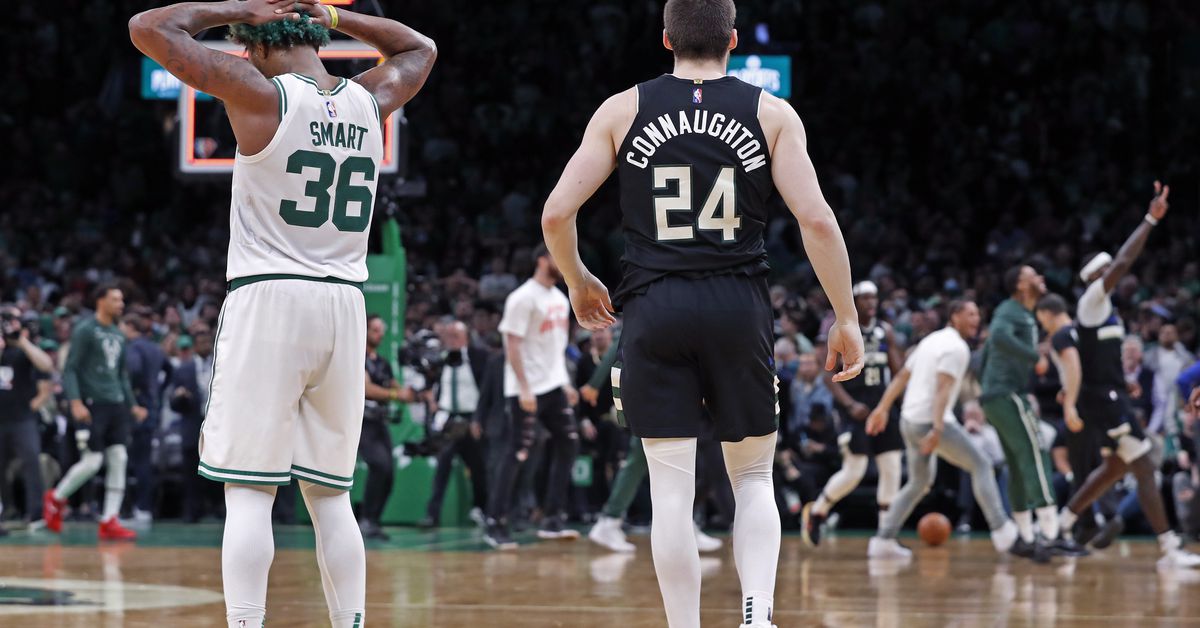 The Boston Celtics “missed a golden opportunity” as Ime Udoka put it postgame, after his team collapsed and dropped Game 5 to the Milwaukee Bucks. Boston now heads to Milwaukee with a major uphill battle in front of them. The Bucks have two opportunities to advance, while the Celtics must win two.

The sad part? It was all so avoidable. Had the Celtics made one more play at any point in the game’s final eight minutes or so, they’d be in control of the series.

Instead, it was the defending champs who made all the plays down the stretch. And now they can close it out back home.

Game 5 featured 88 notes, and that’s without ones for the game’s final five or so plays.

Now? Few of those notes really matter. They’re almost all being scrapped because of the way the game ended. Such is life when you witness an epic collapse.

3. To be fair: in order to collapse, you have to play well first. For the better part of three quarters, the Celtics played really well. Heck, even the first few minutes of the fourth quarter were pretty good.

The ball movement was solid. The defense was exceptional. Everyone who saw the floor was contributing in one way or another, led by some really great efforts off the bench.

It was all so great…until it wasn’t.

4. Rather than run through a bunch of clips, we’re just going to present some thoughts on how the final 8:01 played out. To be completely honest, your author doesn’t really have it in him to relive the game play-by-play style. Plus, who really wants that anyway?

Let’s start with why we’re picking 8:01 as our starting point.

With 8:15 to play, Payton Pritchard drove for a bucket on Grayson Allen to put Boston up 98-87. On the ensuing defensive possession, Al Horford stole the ball from Giannis Antetokounmpo and got fouled while recovering the loose ball with 8:01 remaining.

From that point forward, the Bucks outscored Boston 23-9 to win the game.

Outscored 23-9 to close the game and potentially the series and season.

5. Sticking with the “final 8:01” part, the foul by Giannis Antetokounmpo was the Bucks fourth team foul of the final period. Boston had an 11-point lead and free throws for 8:01.

The Celtics took four free throws the rest of the way. All drawn on two shooting fouls calls.

Four free throws when they were in the bonus for more than eight minutes. At home. While holding a double-digit lead.

That’s a staggering lack of an attacking mindset. And it’s sort of endemic of the loss as a whole. Boston simply couldn’t close a game they needed to close.

6. Besides the lack of free throws, the other offensive problem is that the Celtics simply stopped playing basketball with 8:01 left. Look at these numbers:

Per Second Spectrum, the Celtics’ ball movement stagnated in the fourth.

Here’s the Celtics’ passes and average touch length per quarter:

If the eye test didn’t tell you the Celtics had a lot of one or no-pass possessions in the halfcourt offense, the numbers tell the story.

Boston went into this extreme kill-the-clock style of play with a ton of time left in the fourth quarter. They rarely took shots with more than five or six seconds left on the shot-clock. And most of them came out of isolation sets where one player, usually Jayson Tatum, held the ball.

This looked exactly like the shockingly bad end-of-game offense the Celtics ran against the Miami Heat in the 2020 Eastern Conference Finals. When things got tight in that series, Boston slowed down and became this extreme ISO team and didn’t press Miami with pace and ball movement. Hopefully, it’s just a blip, but this was a worrisome callback to say the least.

Lastly, related to all of this closing offense, is shot selection. Boston took zero three-pointers in the fourth quarter. Yes, the Celtics got some looks at the rim, but they also shot 2-of-6 on long two-pointers in the final 8:01 of the game. It was ISO after ISO into contested, late-clock long twos. The drive-and-kick game that had generated so many good looks was gone.

The Bucks deserve credit, because they started switching some actions and that baited Boston into these shots. But defensive adjustments or not, the Celtics simply have to get better looks down the stretch than a contested long two with the shot-clock running out.

7. Turnovers have been a key in this series. Boston was excellent with their ballhandling in the first half of Game 5. In the second half? Not so much.

All series long, live-ball turnovers have been a bane for Boston. Milwaukee has continually struggled to score against Boston’s halfcourt defense. But gifting them points in transition has hurt the Celtics mightily and did so again in the fourth quarter.

8. Related to the above, at least in part, was bad transition defense. Not only did Milwaukee score 10 points off turnovers in the fourth quarter, they added another five in transition in the period.

The maddening thing? Nine of those points, plus another three-pointer in non-transition, came on plays where the Bucks hit three-pointers while the Celtics were complaining to the officials.

Twice, Jayson Tatum got caught up in barking at the refs, while Jaylen Brown and Grant Williams got caught once apiece. Because they weren’t defending, Milwaukee was able to find shots in advantage situations.

In a game that was very fairly officiated, with almost no controversy, that’s ridiculous. 12 points in the fourth quarter of a tight game because players engaged the officials instead of playing defense. It’s inexplicable and unacceptable.

9. Lastly, we’ll talk about the rebounding, or better put, the lack thereof. Milwaukee had 17 offensive rebounds, which they converted into 20 second-chance points. That is a massive number in a three-point loss.

Yes, the focus will go to the Bobby Portis putback with 11.4 seconds to play. Failure to grab a rebound off a missed free throw was “inexcusable” in the words of Ime Udoka.

But you know what? That particular one wasn’t even all that bad! Jaylen Brown and Marcus Smart simply tipped the ball away from each other. And Portis was in the right spot at the right time for the putback.

There were multiple other occasions where Boston simply didn’t block out and the Bucks got easy putbacks or kickouts for wide-open shots. If anything, the Celtics were lucky the Bucks didn’t score more points on second chances.

Allowing 17 offensive rebounds in what is basically a must-win game is a “matter of pride” as Marcus Smart said postgame.

10. It was tempting to focus on Marcus Smart’s play down the stretch as one of the Takeaways, but he, Ime Udoka, Jayson Tatum and Jaylen Brown all said that Boston’s last offensive set broke down due to miscommunication. It looked like no one but Smart and Derrick White were quite ready for the play, and everything went sideways from there. Then Smart tried to make a play.

And lay off the criticism of Smart on the final turnover. Because you saw a still shot, or a cropped camera angle in slow motion, doesn’t mean that’s how the floor looks to the guy with the ball as he’s got two defenders running at him at halfcourt. There’s been a lot of yelling that guys were open, but they really weren’t. Smart couldn’t have made the crosscourt find to Tatum on the most popular angle, because just off-screen Giannis Antetokounmpo was ready to pounce. It was a wild scramble play with no timeouts left.

Moving on, we’re moving forward. As Ime Udoka, Marcus Smart, Jayson Tatum and Jaylen Brown all said versions of: “This series is not over.”

The Celtics have won in Milwaukee already, and they arguably should have won twice. They didn’t, and that’s what matters with a 3-2 deficit. But they have another chance. This is about getting this series back home to Boston now. Just get back home to Game 7.

As Tatum said, the Celtics can’t win two on Friday night. They can only win one. Since 2022 started, this team has been resilient and they’ve focused only on what’s next. That needs to happen one more time. It’s about winning Game 6. Whatever it takes.