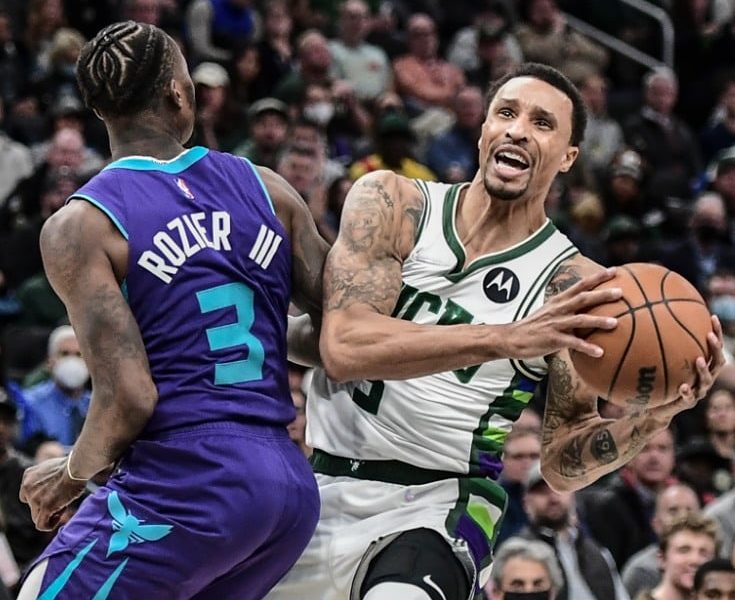 In tonight’s Eastern Conference rematch, the Milwaukee Bucks (26-15) are facing off versus the Charlotte Hornets (20-19) at Spectrum Center. Will LaMelo Ball and the Hornets earn their first head-to-head win against the Bucks this season?

James Borrego said the early All-Star voting that has LaMelo fifth and Miles Bridges eighth validates the #Hornets are headed in the right direction. pic.twitter.com/VJXYQMFhFQ

For those looking ahead less than 24 hours, Giannis Antetokounmpo (27 minutes), Khris Middleton (30), Wesley Matthews (30) and Bobby Portis (32) might be in good shape for tomorrow night in Charlotte.

Additionally, in the Bucks’ 121-109 upset road win versus the Nets on Friday, forward Giannis Antetokounmpo led his team in scoring, amassing 31 points in 27 minutes played. Center Bobby Portis earned another career double-double as well. He contributed 25 points, 12 rebounds and 2.0 assists in 32 minutes spent on the court. In a high-scoring third quarter, Milwaukee outscored Brooklyn 38 to 31.

While the Nets did finish with 62 points in the paint, they struggled with their long-range jumpers, which ultimately led to the Bucks’ much-needed victory. Milwaukee shot 44-for-96 (45.8%) from the field and 16-for-45 (35.6%) from three-point range. This win snapped their two-game losing streak. Now, the team is 13-8 away, 13-7 at home and 12-9 ATS on the road this season. They rank third overall in the Eastern Conference.

Referencing ESPN’s Basketball Power Index, the Hornets have a 75.4% chance of winning.

Meanwhile, on Wednesday, in the Hornets’ 140-111 home win over the Pistons, Kelly Oubre Jr.scored a team-high 32 points in 24 minutes of action. Forwards Gordon Hayward and Miles Bridges each closed out their performances with 19 points, too. Charlotte did allow 36 points in the fourth quarter, but they already had a large lead, so it was mostly during garbage time.

For practical betting trends, the Bucks are 6-3 ATS in their last nine performances. They are also 7-2 straight up in their past nine games played. Next, Milwaukee is 1-5 ATS in the team’s previous six matches versus Charlotte. However, the Bucks are 4-1 ATS in their last five road games this season. Lastly, the total has gone over in four of Milwaukee’s past five games against Southeast Division opponents.

On the other side, the Hornets are 5-2 ATS in their previous seven performances. And, the total has gone under in five of their last seven contests. Next, Charlotte is 10-1 ATS in the team’s past 11 games played at Spectrum Center. Also, the team is 1-4 SU in their previous five contests played on Saturday. So, think about picking the Hornets to win and cover the spread. If you have never placed a bet, skim through our handicap betting guide.

Pick the Hornets to win, they will cover the spread and the total will go under 234. Charlotte is a one-point favorite at home with BetOnline.