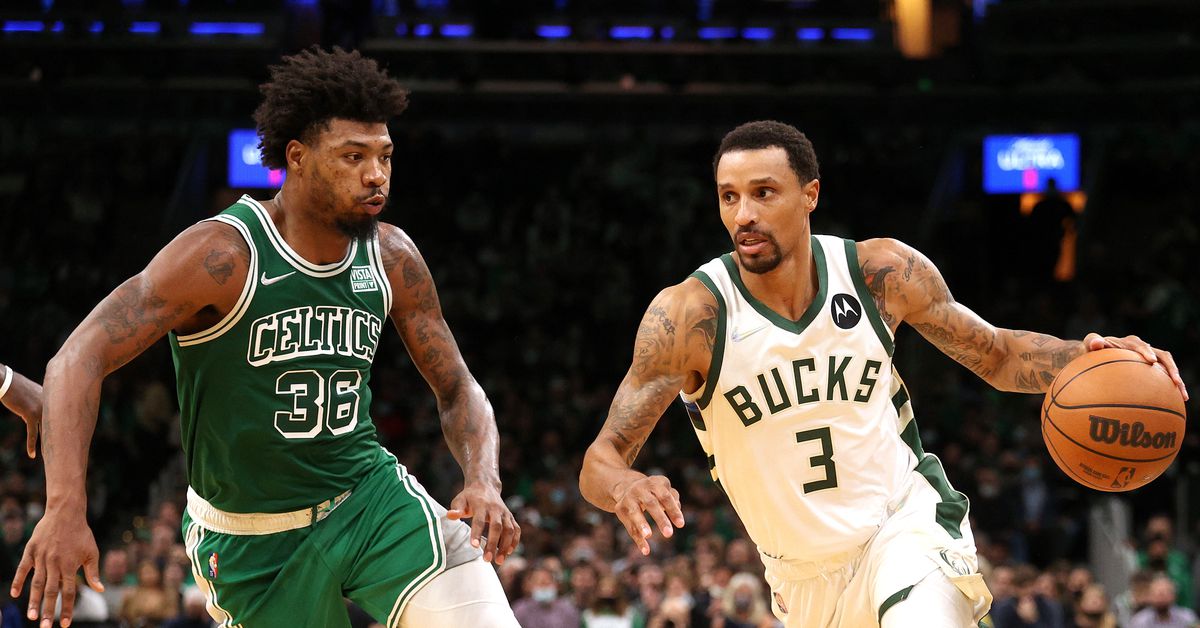 The Celtics return home from a very disappointing 5 game Western road trip in which they went 1-4. They begin a 5 game home stand with this game against the reigning champion Milwaukee Bucks. This is the second of 4 games between these two teams. The Celtics won the first meeting 122-113 in overtime on November 12 in Boston. The Celtics were without Jaylen Brown while the Bucks were without both Khris Middleton and Giannis Antetokounmpo.

The Bucks are playing on the second night of back to back games. They beat the Knicks 112-97 in a matinee game on Sunday. They are playing in the last game of a 4 game road trip. The Celtics are playing in the first game of a 5 game home stand after a grueling 5 game road trip. It doesn’t get much easier for the Celtics, even though they are at home. They will face the Warriors, Knicks, Suns and Cavaliers after this game against the Bucks, all teams with winning records.

The Celtics got the good news on Sunday that Jaylen Brown will be returning for this game. He had returned too quickly from the hamstring injury and this time they are certain that he is ready to return without having a setback. Bruno Fernando is still out with a back injury and Josh Richardson is in Health and Safety protocols and will miss this game. Marcus Smart is listed as probable due to an illness. If he can’t play, then I expect Dennis Schroder to replace him in the starting lineup.

For the Bucks, Khris Middleton and Giannis Antetokounmpo, who missed the first game, are both expected to be playing in this game. Brook Lopez is out after having back surgery but they have signed DeMarcus Cousins to fill in at center in his absence. Wesley Matthews is in Health and Safety protocols and is also out. Donte DeVincenzo is expected to make his season debut on Wednesday but is still out for this game. Finally, former Celtic, Semi Ojeleye is out with a calf injury.

Al Horford vs Giannis Antetokounmpo
Giannis was a late scratch for the first game between these two teams and so this is the first time this season Al will be tasked with guarding him. Giannis is averaging 27.6 points, 11.8 rebounds, and 5.7 assists per game. He is shooting 53.4% from the field and 29.5% from beyond the arc. He’s not shooting a great percentage from the perimeter, but the Celtics still need to guard him out there as he can make them.

Jayson Tatum vs Khris Middleton
Middleton also missed the Bucks’ first game against the Celtics. He is averaging 18.2 points, 5.5 rebounds, and 5.1 assists. He is shooting 41.1% from the field and 35.3 from beyond the arc. He always seems to have a huge game against the Celtics and so they need to pay special attention to him on defense.

Honorable Mention
Marcus Smart vs Jrue Holiday
Holiday is averaging 15.9 points, 4.7 rebounds and 6.1 assists per game. He is shooting 46.1% from the field and 35.6% from beyond the arc. He is another player that seems to have big games against the Celtics and they need to guard him both in the paint and on the perimeter because he can get to the rim and shoots a decent percentage on 3’s.

Keys to the Game
Defense – Defense is absolutely the key to winning every game. The Celtics had been making defense their identity and had climbed up to 5th in the league in defensive rating. Then They started slipping and are now 10th with a defensive rating of 107.2. Jaylen Brown’s return should help them on the defensive end. The Celtics must get back to making defense a priority. The Bucks are 7th with a defensive rating of 106.3. The Bucks are 4th with 39.8 three pointers per game and they make 36.1% of them so the Celtics must do a better job of defending the perimeter. The also have to defend the paint since they have several players who drive to the basket and are good finishing inside.

Rebound – Rebounding is also a key to winning every game. You can’t score without the ball and the best way to get the ball and to get extra possessions is to crash the boards and beat the opponent to rebounds. Rebounding takes effort and when the Celtics put out extra effort to win the rebounding battle, that effort usually continues to other areas of the game. The Bucks are first in the league with 47.7 rebounds per game. The Celtics are 8th with 46 rebounds per game. They will need to really hustle and work hard to bet the Bucks on the boards.

Focus on Scoring – The Celtics need to focus on taking good shots and on hitting those shots. If the 3s aren’t falling they need to focus on getting inside to get better shots. They can’t let their focus wander and take quick or contested shots. They need to move the ball and keep the Bucks’ defense off guard while they find the open man and take good shots. The Celtics shot just 15.4% from beyond the arc against the Suns while taking 26 threes. They shot just 37.6% from the field. The Celtics must focus on taking good shots and then make them.

Play as a Team – Iso ball will rarely win games. The Celtics had just 13 assists against the Suns and it showed in the results. The Celtics need to move the ball and trust their teammates. Each player has to work together on offense and not try to win the game on their own. They have to work together on defense and be sure they have each others’ backs and not miss the switches. If they are going to start winning again, it will have to be as a team and working together.

Play Hard 48 Minutes – In the Celtics’ last 4 second quarters, they have been outscored by 9 points, 7 points, 17 points and 17 points. They can’t afford to have bad quarters like that against good teams. They have to come out strong right from the start and not dig a hole they will have to work to climb out of. They absolutely have to play better in the second quarter and not allow teams to put the game out of reach with a weak effort from the Celtics. And they have to play hard right up until the final buzzer sounds. They simply can’t have those lapses if they want to beat good teams like the Bucks.

X-Factors
Back Home – The Celtics are at home after a tough road trip and have had 2 days off. The Bucks are playing in their 4th straight road game and are playing in back to back games and could be a bit road weary. The Celtics need to take advantage of that and run and feed off the crowd and gain motivation from finally playing at home.

Officiating – The Officiating is always an x-factor. This year, especially, officials are calling fewer fouls and are allowing players to defend more and offensive players need to know that they won’t always get the calls. Players need to focus on playing their game and not spend time complaining about no calls and bad calls. Some crews call it tight and others let them play a bit more physically. The Celtics need to adjust to how the refs are calling the game and not let it take away from their focus.