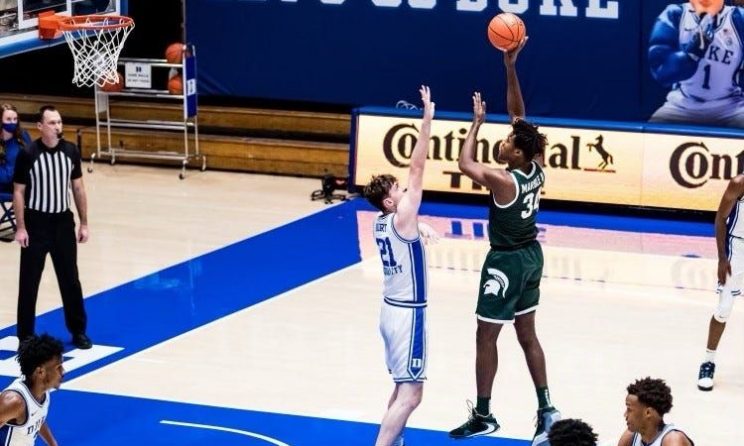 Rocket Watts got the start and scored the most.

But Foster Loyer might have made the most impactful plays when Michigan State basketball needed it most.

Coach Tom Izzo said he made a shakeup at point guard for defensive purposes Tuesday as the 12th-ranked Spartans traveled to No. 8 Duke, inserting the athletic and bigger Watts for Loyer.

It worked on multiple levels. Watts scored 13 of his team-high 20 points in the second half, while Loyer came off the bench early and contributed several pivotal little plays that were massive in the big picture of the Spartans’ 75-69 win at Duke in the Champions Classic.

“Let me tell you something, Foster Loyer acted like the captain and played like the captain,” Izzo said. “He was Rocket’s biggest cheerleader, he was ready to go when he came in. Some guys could have hung their heads and done this and done that. … It was kind of our peripheral guys that really played well made the difference in this game.”

DEEPER LOOK: MSU gets elusive win at Duke, shows it can play with anyone

It was a shaky beginning for Watts, a sophomore in his first start of the season, and MSU fell behind, 13-3, in the opening five minutes. The 6-foot-2 Detroit native was expected to be the heir apparent to Cassius Winston, but Loyer started the first two games.

“I mean, It’s a process,” said Watts, who made 7-of-16 shots and finished with three rebounds and two assists in 25 minutes. “This is my first year playing point guard on a big stage. I just got to work on taking care of the ball when they pressure me and don’t get out of control.”

While MSU already had five fouls in less than 3 minutes of action, Loyer replaced Watts and stood his ground defensively with a staple of coach Mike Krzyzewski’s program. The 6-foot junior took charges against Jeremy Roach with 15:01 left and another on Duke’s next possession against DJ Steward. He took a third charge with MSU up 10 and 50 seconds to play in the game.

Loyer also grabbed four of his career-high five rebounds in the first half and scored his only basket, a 3-pointer from the left corner, to pull the Spartans back into a tie with 3:14 left before halftime. He finished with five points but no assists in a season-low 15 minutes.

But Izzo said Loyer’s presence on the bench was just as important as his role on the court.

“Don’t downplay Foster Loyer’s contribution,” Izzo said “Not only as a player, not only defending, but also leading. He was phenomenal in those huddles.”

Julius Marble joined the playing group after not playing much in the first two games.

The 6-8 sophomore from Dallas had a show-stopping performance off the bench. Marble hit all five shots he took, including a deep jumper in the first half and a two-play sequence in the second half with a tip-in and a dunk to finish with a career-high 12 points.

“We’re at Duke and I kind of hate Duke,” Marble said of his dunk. “So to do that, it felt really good.”

And he did his damage after spending the previous few days on MSU’s scout team pretending to be one of Duke’s big men.

“I knew a little bit more than I would have if I was on the first team because I studied the players, I knew all their tendencies and stuff like that. So it did help with that,” said Marble, whose previous high was nine points twice last season. “I wasn’t going out there trying to get a basket or this and that, I was just trying to do my role. It just so happened I was able to score some points and be a spark off the bench.”

This time, he upped it to finish with 10 points and a career-high 10 rebounds in a personal-best 29 minutes. Hall also had a pair of assists.

“That’s one of my best friends on the team,” Marble said of Hall. “We’re roommates, too, so it was good to go out there with your roommate. And it’s even better to play good with your roommate and then come out with the win.”

MSU is now 4-6 all-time in the Champions Classic. It was their first win over Duke in four tries in the event, as well as the Spartans’ first win in four games at Cameron Indoor Stadium. The game was moved there after the original game Nov. 10 in Chicago was postponed. … Izzo is now 3-12 all-time against Krzyzewski, but his Spartans have won two of the last three meetings that have come 20 months apart. That includes the win in the 2019 Elite Eight that sent MSU to Izzo’s eighth Final Four, which is three more than Duke’s coach has been to since 1996, Izzo’s first year.