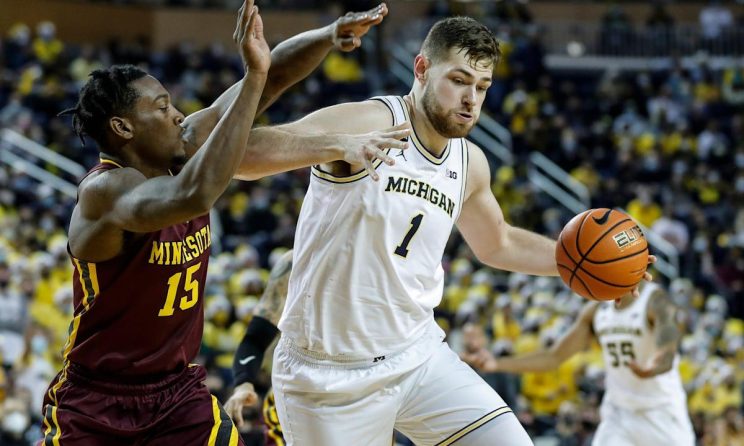 Where: Crisler Center in Ann Arbor.

Michigan center Hunter Dickinson (1) dribbles against Minnesota forward Charlie Daniels (15) during the second half at the Crisler Center in Ann Arbor on Saturday, Dec. 11, 2021.

Game notes: The good feelings that came out of Michigan basketball’s convincing wins over San Diego State and Nebraska early in the month were mostly washed away by last Saturday’s 75-65 loss to Minnesota. The Wolverines are still working out their issues on offense, after shooting 3-for 16 — that’s 16.7% — on 3-pointers against the Golden Gophers. Michigan still has Hunter Dickinson in the middle, but he can only do so much, especially if star freshmen Moussa Diabate and Caleb Houstan are having off nights.

Still, expect Dickinson to feast in this one, as the Thunderbirds have just two players in their rotation at 6 feet 7 or taller: center Jason Spurgin, who is averaging 5.6 points and 5 rebounds in 20.3 minutes of action, and forward Malik Muhammed, averaging 1.4 points and 2.6 rebounds in 7.6 minutes. Southern Utah, which is leaving the Big Sky Conference for the WAC next season, gets a lot of production from guard John Knight III, who is averaging 18.1 points, 5 rebounds, 4 assists and 1.9 steals in just over 32 minutes a game. The Thunderbirds shouldn’t be too tough a challenge for the Wolverines; they sit at No. 120 in the NCAA’s NET rankings, well below San Diego State (No. 91) but way, way, way above Nebraska (No. 217).

[ Here’s how you can gain access to our most exclusive Wolverines, Tigers, Pistons and Lions content for a great price. ]

Can’t see the updates? Refresh the page or check them out on Twitter.