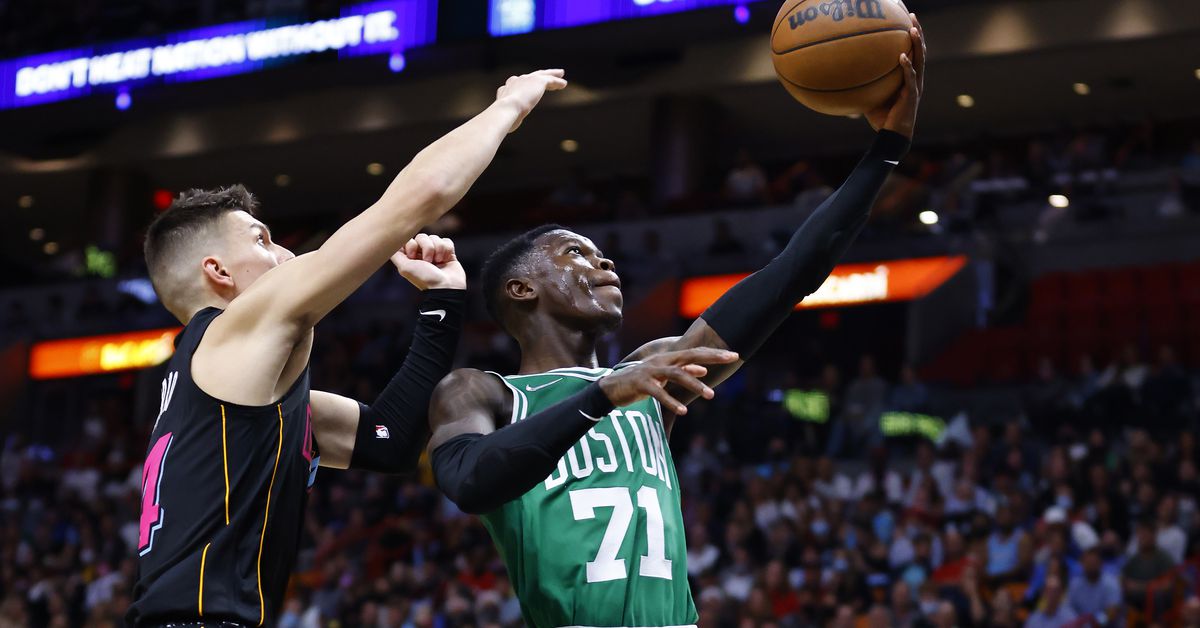 The Celtics return home from a win at the Pelicans to host the Miami Heat, who are coming off a 3 overtime home loss to the Raptors. This is the second of 3 games between these two teams this season. The Celtics won the first game 95-78 at Miami. That was a defensive battle with the Heat holding the Celtics to 39.7% from the field and the Celtics holding the heat to 34.6% from the field. Both teams were mostly healthy for that game. They will meet one more time on March 30 in Boston.

The Heat are playing in the first game of a 6 game road trip. This is the first of back to back games for them and they will travel to Toronto for a game on Tuesday. The Celtics are at home for 3 games with Charlotte coming to Boston on Wednesday for a key game in determining standings. They then head out on the road once again to take on Detroit, Orlando, and finally Brooklyn before heading home once more.

The Celtics remain mostly healthy, Romeo Langford was originally questionable after leaving Saturday’s game with a sore heel but has been listed as available on the latest injury report. PJ Dozier (knee) and Bol Bol (foot) remain out. Dennis Schroder is listed as probable with right Achilles tendinopathy.

The Heat have 7 players listed as out. Kyle Lowry (personal), Markieff Morris (covid), KZ Okpala (wrist), Victor Oladipo (knee), Omer Yertseven (covid), Jimmy Butler (toe irritation), and PJ Tucker (knee) are all out. With Butler and Tucker both out of the starting lineup, I’m guessing that Tyler Herro will start at shooting guard while Duncan Robinson moves up to power forward and Max Strus starts at small forward. That’s just a guess, though.

Jaylen Brown vs Tyler Herro
Herro is averaging 20.3 points, 4.9 rebounds and 4.0 assists per game. He is second only to Jimmy Butler in scoring. He is shooting 42.4% from the field and 38.1% from beyond the arc. He is dangerous from outside if allowed to find his rhythm and get hot. He is another player who always seems to have a big game against the Celtics. The Celtics will need to defend him well, especially on the perimeter, to keep him from having a big game. The Celtics need a good game from Jaylen Brown also.

Robert Williams III vs Bam Adebayo
Adebayo always seems to play well against the Celtics. He is averaging 17.8 points, 10.1 rebounds, and 3.6 assists per game. He is shooting 51.4% from the field and isn’t a threat from beyond the arc. The Celtics will need a big game from Timelord on both ends of the court.

Honorable Mention
Jayson Tatum vs Max Strus
I’m guessing that former Celtic Max Strus will start in place of the injured Jimmy Butler. Strus is averaging 11.1 points, 3.4 rebounds and 1.3 assists. He is shooting 44.2% from the field and 39.8% from beyond the arc. The Celtics need to guard him well on the perimeter since he is very capable of getting hot from the outside. Of course, the Celtics need Jayson Tatum to hit his shots and play well in this game.

Rebound – As with defense, rebounding will always be a key to winning. Teams need the ball to score and rebounding gives them extra possessions and also keeps their opponents from getting those possessions themselves. Much of rebounding is effort and hustle and when the Celtics put out that extra effort to grab rebounds, it usually translates to other areas of the game as well. The Heat score 14.1 second chance points per game and the Celtics need to work hard on the boards to stop those extra points.

Play Hard for 48 minutes – The Heat play hard. For the most part, they all give maximum effort for the entire game and they often win games just by outworking their opponents. The Celtics must come out strong on both ends of the court and they need to play hard for all 48 minutes until the final buzzer. Against the Heat, they can’t afford to let up for a quarter or to allow the Heat to play harder than them for any length of time or they will get blown out.

Move the Ball and Push the Pace – The Celtics have looked very good when they push the ball up the court and when they keep the ball moving and find the open man. When they slow the game down and over-dribble or play hero ball, things don’t often end well. They have to try to get up the court on offense before the Heat get their defense set and they need to move the ball in order to get good shots.

X-Factors
Home Game – The Celtics are once again at home. The Heat aren’t a bad road team with a 14-12 record away from home, but they will have the distractions of being on the road and having to stay in a hotel and the cheers (and jeers) of the Celtics fans. The Celtics need to reward their fans with a game where they give maximum effort to defeat a rival team in a very important game.

Officiating – Officiating is always an x-factor in every game. Every crew officiates differently. Some call it tight, others let them play. Some favor the home team. Some favor the road team. Some just make bad, head scratching calls. The Celtics need to adjust to the way the refs call the game and not let bad calls and no calls take them out of the game.