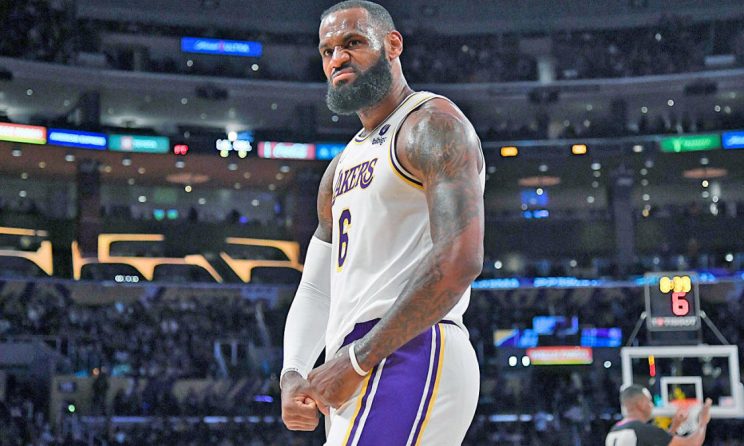 After the Los Angeles Lakers dropped a disappointing game to the Los Angeles Clippers earlier this month, there was open speculation about how much longer coach Frank Vogel would remain in charge of the team. So much so that players were asked about it during media availability.

LeBron James took the opportunity to put the onus on the players.

“I think criticism comes with the job, you know?” LeBron said. “Frank is a strong-minded guy. He has a great coaching staff. And we as his players have to do a better job of going out and producing on the floor.”

As the team’s leader and one of the best players in the league, that responsibility started with him. And since that quote, LeBron has done his best to lead by example. Perhaps never more so than Sunday night, as LeBron powered the Lakers to a 106-94 win over the Orlando Magic. With Anthony Davis out again because of a sore knee, LeBron put the team on his back, finishing with 30 points, 11 rebounds, 10 assists and three blocks on 12-of-20 shooting from the field.

Though it feels a bit strange to say this was a throwback LeBron performance when he’s never stopped being one of the best in the league, we really did see some vintage stuff tonight. He was in total control of every aspect of the game and was operating on a different level from everyone else on the court. His trio of ridiculous chase-down blocks — arguably his signature play — stole the show.

First, early in the second quarter, RJ Hampton thought he was about to finish at the rim on the secondary break. LeBron had other ideas and came soaring in for an emphatic rejection that he swatted off the backboard like a volleyball spike. And for good measure he dropped the Dikembe Mutombo celebration.

Then, in the third quarter he got Chuma Okeke. The young Magic forward actually got a step on LeBron but quickly learned about the legend’s recovery skills. LeBron got back, rose up and extended for an incredible last-second block.

Finally, a few minutes later in third quarter, Cole Anthony tried to sidestep the defense for a little floater in transition, but he had no idea LeBron had been tracking him all the way down the floor. Measuring his steps and calculating the angle, LeBron exploded when the time was right and nearly sent the ball out of bounds.

It wouldn’t be a true LeBron master class without a bit of showmanship, and he delivered in that department as well. After Wendell Carter Jr.’s goggles were knocked off his head, LeBron picked them up and tried them on. Classic bit.

Thanks to LeBron’s 101st career triple-double, the Lakers improved to 15-13 on the season and have won three of four games since he said the players have to be better. Granted, two of those wins were against the Oklahoma City Thunder and Orlando Magic, but the Lakers will take what they can get right now. In a crowded Western Conference, this mini streak has them up to sixth place.