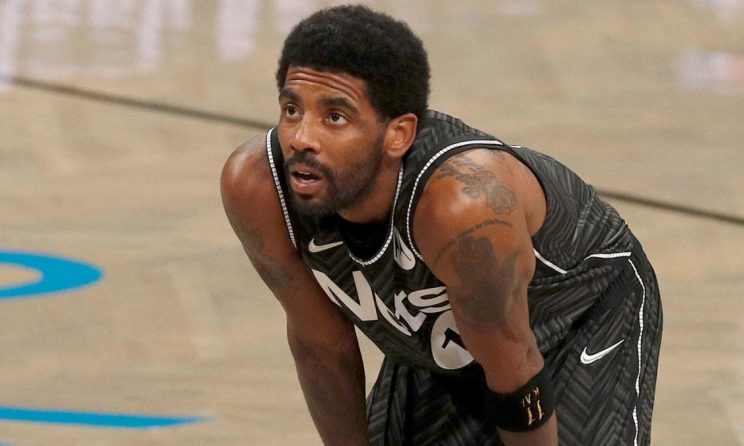 Kyrie Irving has not yet played for the Brooklyn Nets this season because of a vaccine mandate in New York City that prevents unvaccinated players from participating in home games in New York. Irving technically could have played in Brooklyn’s first two games of the season, but the Nets chose not to play Irving at all rather than allow him to participate only in road games. On Sunday, though, the Nets returned home to Brooklyn to play their first home game of the season, and that has led to significant protesting outside of their home arena, the Barclays Center.

A number of protesters against the vaccine mandate gathered at the arena in downtown Brooklyn on Sunday. They chanted “let Kyrie play” while holding up signs that read “Stand with Kyrie” ahead of Brooklyn’s Sunday matinee matchup with the Charlotte Hornets.

The protests got scary as they progressed. At one point, protesters broke through the barricades set up by security, who had to rush to protect the doors. One protester even picked up and threw a barricade at a security officer:

At one point, security had to even lock down the building and prevent fans from entering the building.

Security personnel eventually got the protests under control and resumed allowing fans with tickets to enter the building. However, at tip off, there were still a number of empty seats due in part to delays caused by the protest.

“I chose to be unvaccinated, and that was my choice,” Irving explained recently on Instagram Live. “And I would ask y’all just to respect that choice, and I am gonna just continue to stay in shape, be ready to play, be ready to rock out with my teammates, and just be part of this whole thing.”

There has been no indication yet that New York City plans to lift its mandate. Irving has not suggested that he is planning to get the vaccine, nor have the Nets backed off their decision not to play Irving until he can participate in all of their games, not just the ones on the road. Until one of those things changes, Irving will remain out of Brooklyn’s lineup.