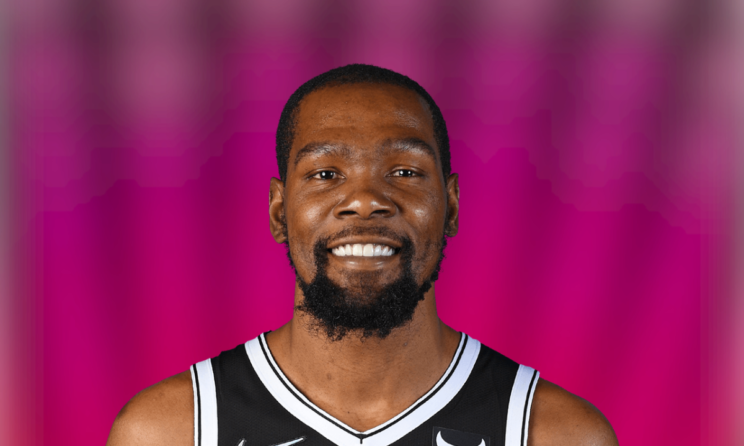 Here’s a better question: how likely is it that Durant retires with the Nets? His loyalty was always with Irving more than with the organization. According to comments made by ESPN’s Nick Friedell on SportsCenter, Durant and Irving aren’t as close as they used to be. “At every turn publicly, [Kevin Durant] has been there to support [Kyrie Irving], to say we need Kyrie, to say Kyrie can win a title with me here in Brooklyn. But I can tell you, I’ve been talking to people in the organization the last couple of weeks, when they finally sit down and talk to Kevin throughout the summer, they are trying to figure out if Kevin saw what everybody else saw. … The reason that whole season got sidetracked was because they couldn’t count on Kyrie, and they didn’t know if he was going to be out there. And the issue with Kevin is, he wants to win badly, he wants to be loyal to his friend. But I’ve been told that relationship, while very close, isn’t always as close as it appears to be.”
Source: Ricky O’Donnell @ SB Nation

Eric Pincus @EricPincus
Latest @BleacherReport A 3-Team Kyrie Irving Trade Between Lakers-Nets-Thunder Could Make Everyone Happy – I mean, this is the internet, no single thing is going to make everyone happy. Nonetheless, I dug into why it could add up bleacherreport.com/articles/10039… – 1:09 AM

David Hardisty @clutchfans
Said @Kendrick Perkins: “It’s not going to be a ‘might’ that Kevin Durant ‘might’ want out. He’s GOING to want out if the Brooklyn Nets don’t offer Kyrie that long-term extension.” – 9:54 PM

Bill Oram @billoram
In which I say — through gritted teeth — that the Lakers should pursue Kyrie Irving if he’s really available, but only because they’ve backed themselves in such a corner they can’t afford to ask themselves the most important questions. theathletic.com/3379101/2022/0… – 8:27 PM

StatMuse @statmuse
Things Kyrie needs to do to join the Lakers:
— Leave his hometown
— Leave his best friend
— Leave $30 million on the table
If LeBron pulls this off, he is the greatest GM of all time. pic.twitter.com/bHYQ06sSr1 – 7:33 PM

Sam Quinn @SamQuinnCBS
The Pistons could break Twitter right now by absorbing Russell Westbrook with their new cap space.
Take the 27/29 firsts and help the Lakers clear the way for Kyrie lmao. No Pistons fan is gonna be on board with it but it would amount to trading Grant and space for three 1sts. – 6:12 PM

David Hardisty @clutchfans
Windhorst thinks the Kyrie stuff is mostly “saber rattling” and most think he’ll be back in Brooklyn: “His opportunity to go to another team really doesn’t have a lot of teeth in it. If he’s really threatening, he would have to opt out … and take a $25-30M paycut (elsewhere).” – 3:54 PM

Marc Stein @TheSteinLine
The latest on Kyrie Irving, which other teams legitimately factor into the discussion, updates on Jalen Brunson and P.J. Tucker and more … all via my latest around-the-league notebook freshly dispatched worldwide: marcstein.substack.com/p/kyrie-irving… – 3:48 PM

Jabari Davis @JabariDavisNBA
folks really believe they KNOW what Kyrie is thinking and planning and that’s adorable to me. just precious 😂 – 3:39 PM

Sam Quinn @SamQuinnCBS
I’ll believe Kyrie taking the TPMLE when I see it. I’m not dismissing it outright because he’s not a fully rational actor, but I’m not ready to really invest any thought into it because it would just be so insane. I still think he re-signs with the Nets. – 3:35 PM

Anthony Puccio @APOOCH
I’ll be on @ESPNRadio during the 7-9pm ET segment to discuss all things Nets/Kyrie Irving. Tune in – 3:26 PM

David Hardisty @clutchfans
Woj: “Kevin Durant remains very connected to Kyrie Irving. They came together and are still together. Durant wants Kyrie back. What the Nets are risking if Kyrie does leave: Does Kevin Durant then ask for a trade?”
He says Kyrie’s best leverage to get a big deal is KD pressure. – 3:06 PM

Justin Kubatko @jkubatko
The @Oklahoma City Thunder are the only franchise in NBA history to select a future MVP in three straight drafts:
✅ Kevin Durant (2007)
✅ Russell Westbrook (2008)
✅ James Harden (2009)
In fact, no other franchise has even selected a future MVP in back-to-back drafts. pic.twitter.com/Ynq6enOxHn – 3:01 PM

Aaron Rose @AaronBenRose
If you’re the Raptors and you HAD to (and could/they can’t) sign either Kyrie or Harden to the max who would you pick baggage and all – 2:30 PM

Austin Krell @NBAKrell
Regarding the report that the Nets are interested in PJ Tucker, besides the fact that KD reportedly isn’t helping recruit guys, BKN is less than $2m below the apron if we assume Kyrie and Patty Mils return.
So, they got a good deal of work to do to create the NTMLE for Tucker. – 2:10 PM

Bobby Marks @BobbyMarks42
And here’s the clip from this morning
Tim Legler on Kyrie Irving’s contract extension: The talent is NOT enoug… youtu.be/hez9x-3LbOA via @YouTube – 11:00 AM

Why? Because Kevin Durant is his homie. ESPN’s Adrian Wojnarowski laid it out for us in a recent report on ESPN+. If Irving leaves, there’s a chance KD might leave, too. And Brooklyn doesn’t want that. “For everything owner Joe Tsai and general manager Sean Marks did to assemble one of the modern NBA’s most talented Big 3s, Irving’s impenetrable connection to Durant looms as a domino to the dismantling of the roster. Brooklyn is straddling the narrowest of walkways: Keeping conviction on Irving’s contract talks and keeping Durant’s desire to stay a Net.” -via For The Win / June 23, 2022

Woj laid out the nightmare scenario for the Nets — which is a dream scenario for every other team: Irving’s exit leading to a KD trade demand. Kyrie Irving’s search for leverage on his contract discussions with the Brooklyn Nets won’t be found with the threat of a $30 million pay cut to sign with the Los Angeles Lakers, but the sum of the franchise’s deepest fears: Irving walks, and Kevin Durant wants a trade. -via SB Nation / June 23, 2022

Matt Sullivan, who got a front row seat as some of the drama unfolded in Brooklyn as he wrote his book ‘Can’t Knock The Hustle’ shared some of the dysfunction he witnessed. “I just remember not being able to talk to the management, talk to the coaches, talk to anyone without them being kind of scared of these guys. Including Kenny Atkinson, who built this whole program up,” Sullivan said in an interview on the Dan Le Batard Show with Stugotz. “He’s kinda saying, ‘Let’s leave KD, the Maserati, in the case, and let Kyrie be Kyrie.’ But Kyrie goes behind his back and gets him fired. Kenny Atkinson is left wondering if he should fly halfway across the country and have a talk with this guy.” -via Heavy.com / June 23, 2022