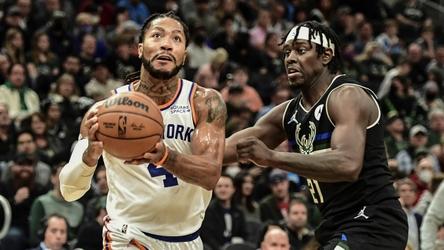 After dropping the last two games, the Knicks bounced back to defeat the defending champion Milwaukee Bucks, 113-98, on Friday.

Here are the takeaways….

– RJ Barrett didn’t have the best start, having two turnovers in the Knicks’ first two possessions-they would have five in the first quarter. Neither the Knicks or Bucks would shoot well in the first three minutes of the game, but the three-pointers would start to fall for both teams. Julius Randle and Barrett would get the Knicks on the board, but the Bucks would drain three of their own. There wouldn’t be a two-point field goal until five minutes into the first quarter. Turnovers and cold shooting from the Knicks led to a 14-0 run for the Bucks. The Knicks shot 32 percent, including 3 of 16 from three, and trailed Milwaukee 38-19 after one quarter.

– The Knicks started the second quarter with a foul and another turnover, but the team would change their offensive plans and attack the rim. The team got to the free-throw line 11 times. The Knicks would go on a 7-0 run, led by Derrick Rose’s scoring and dishing. The Knicks gradually cut the lead to six points after being down by as much as 21. Rose scored eight points while Randle dropped 10 points in the second as the Knicks trailed 63-56 at halftime.

– Good defense and a balanced attack helped the Knicks cut the lead to three. However, whenever they cut the lead the Bucks would answer with a timely three-pointer. The Knicks went on a 21-10 run to take a lead for the first time. Entering the final quarter, the Knicks led the Bucks, 88-83. The Knicks shot 62 percent while the Bucks made only 33 percent of their shots. Barrett dropped 10 points to get his fifth-straight 20-plus point game.

– Rose got the Knicks scoring started with a three, his second of the night up to this point. Rose would start to take over the game in the early minutes of the fourth quarter, helping the Knicks go on a 7-0 run to give the team an 11-point lead. After a small run by the Bucks, the Knicks would go on a 14-0 run to give them their biggest lead of the game (22). The Bucks shot just 23 percent in the final quarter. Randle scored 11 points in the final frame.

– The Knicks held the Bucks to just 39 percent shooting. Randle led all scorers with 32 points while Barrett dropped 20 and Rose added 23 points off the bench.

The Knicks return home to take on the Cleveland Cavaliers on Sunday at 6:00 p.m.