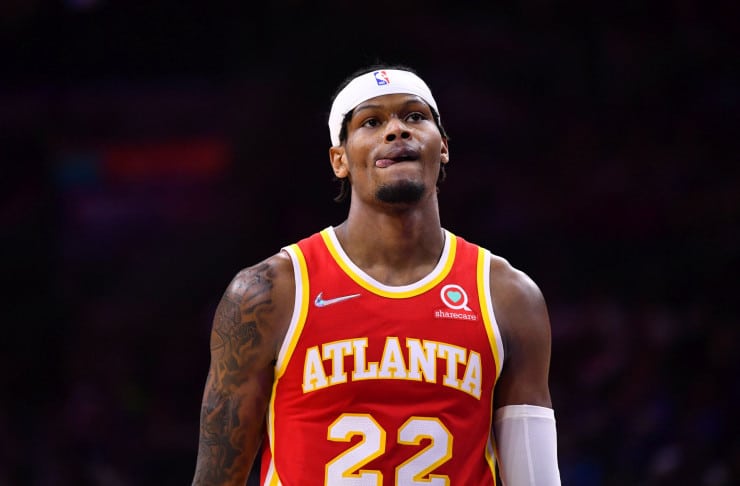 With the NBA trade deadline four weeks away, the first major move was made today with a Cam Reddish trade from the Atlanta Hawks to the New York Knicks.

The full Cam Reddish trade details look like this:

New York is currently 21-21 after winning for the fourth time in their last five games last night against Dallas. Oddly enough, their next game will be in Atlanta on Saturday. They have been playing better despite not having two of their marquee point guards in Kemba Walker and Derrick Rose. One of the players that have filled that void is RJ Barrett, who will now reunite with his college teammate.

Barrett had a slow start to the season but has turned it on this month. He finished with back-to-back 30 point games for the first time in his career last night in the victory over the Mavericks. He has three 30-point outbursts this month and is shooting 50 percent from three-point range. Barrett and Reddish spent one season together at Duke before they were selected 3rd overall (Barrett) and 10th overall (Reddish) in the 2019 draft.

He is extension eligible this offseason

Hill is out for the season and is on an expiring minimum contract. He has veto power and will approve the trade. https://t.co/4NliZsGkg6

Both of these teams had lofty expectations after their playoff runs last season. Both have been large disappointments this year, which was part of the reason why this deal was made. Atlanta was also very hesitant to offer Reddish a big contract in the offseason, with so many players on their roster needing to be prioritized. Reddish will now have the opportunity to play a bigger role for a team and doing it on a big stage.

Reddish averaged 27 minutes per game in his rookie year and saw that bumped up to 29 minutes last season. This year that number has dropped to just 23 minutes despite shooting career-high percentages from three (38 percent), the free-throw line (90 percent), and 40 percent overall from the floor. He should have an immediate impact for New York as they try to get back into the playoff hunt.

The burning question surrounding this Knicks team now is how do they complete the Duke reunion with Zion Williamson? The superstar has yet to see the floor this season as the New Orleans Pelican continues to rehab his injured foot.

Reddish and Barrett together again will fuel every Zion rumor in the world.

If they can get Mike Krzyzewski to coach them this team could reach the Elite Eight someday.

The Hawks are freeing up their roster as they bring back some of their key players that have been out of the lineup. Trae Young has had a solid season despite a few off nights, but the team has been struggling. Most of the league has known for weeks that Reddish was available, and would likely be dealt, but the Hawks might not be done after this deal.

The Atlanta Hawks are open for business, per @JakeLFischer

“‘Everyone but Trae Young and Clint Capela are available,’ one assistant general manager told B/R.” pic.twitter.com/2uIPYYZfNj

The Hawks could have a reclamation project in Knox, but the 9th pick in the 2018 draft just never found his role in New York and has not been a target for other teams. The real acquisition for Atlanta here is the first-round pick, which gives general manager Travis Schlenk another positive asset to use in future trades as they try to improve this team. After making it to the Eastern Conference Finals last year, the Hawks sit at 17-23 now, ahead of only the Pacers, Pistons, and Magic.

Atlanta has won just five games since the start of December and has a tough road ahead. They are in Miami tonight and have games against the Bucks, Timberwolves, Heat, Hornets, Celtics, Lakers, Raptors, Suns, and Mavericks before the trade deadline. They will need to make some moves to address their defense, as they give up the fifth-most points of any team this season and rank 28th in defensive rating.