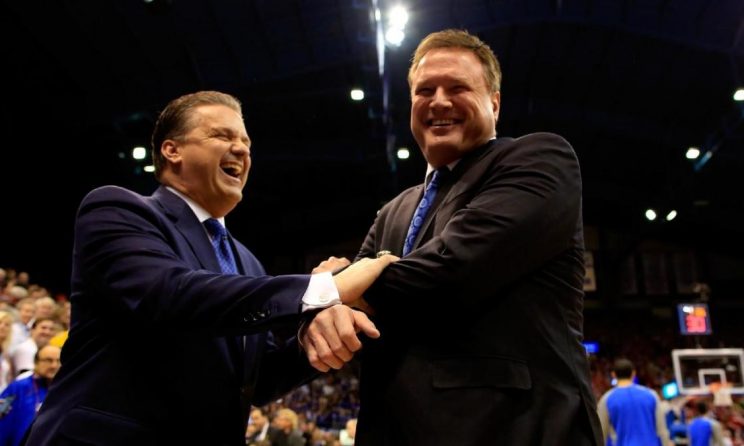 The second game of the annual Champions Classic could be one to watch as No. 7 Kansas faces No. 20 Kentucky at Bankers Life Fieldhouse in Indianapolis on Tuesday. It will be a battle between two of college basketball’s bluest of bluebloods, and to no one’s surprise, it’s a matchup between two teams who entered the season with realistic NCAA title expectations.

Funny enough, both are hoping this game can serve as a tune-up after a bumpy start. Kentucky lost at home to Richmond over the weekend favorite while Kansas lost to No. 1 Gonzaga in its opener, and so both enter Tuesday at 1-1 on the season.

Kansas: Bill Self and the Jayhawks are replacing two All-Americans in Udoka Azubuike and Devon Dotson, and they are doing so with an experienced returning core led by Marcus Garrett, Ochai Agbaji and David McCormack. This might not be as elite a defensive unit on the whole as it was last season, when it was second nationally in adjusted efficiency at KenPom, but the pieces are in place for KU to field a contender on the strength of experience and top-end talent. They romped Saint Joseph’s on Friday to get to 1-1 on the season and kept the Gonzaga game competitive, which is no small feat against a team considered the betting favorite to win the national championship.

Kentucky: Kentucky went in inverse order of its wins and losses as Kansas to stumble here. It opened its season with a resounding 81-45 win over Morehead State before falling at home Sunday to Richmond by 12 points. The Spiders have a squad full of experience and might have the best team in the A-10, so no panic is in order for UK yet. Still, this is an interesting spot to see how the young Wildcats respond. John Calipari is starting four freshmen and a senior, so we’ll quickly learn just how this young batch of stars handle adversity in a big spot against a top-10 team.

Kansas has an experienced and proven backcourt. Kentucky’s frontcourt — led by senior 7-footer Olivier Sarr — is long and talented. Ultimately, this game gets decided in the margins, and since it’s a toss up, I’ll take Kentucky and the points. This Wildcats team is young but incredibly long and talented top to bottom, enough so to give Kansas — for all its experience — enough fits to keep it within the margin. Might even be worth a moneyline sprinkle. You know UK is going to be fired up after taking a loss at home over the weekend to a mid-major opponent. Pick: Kentucky +3.5