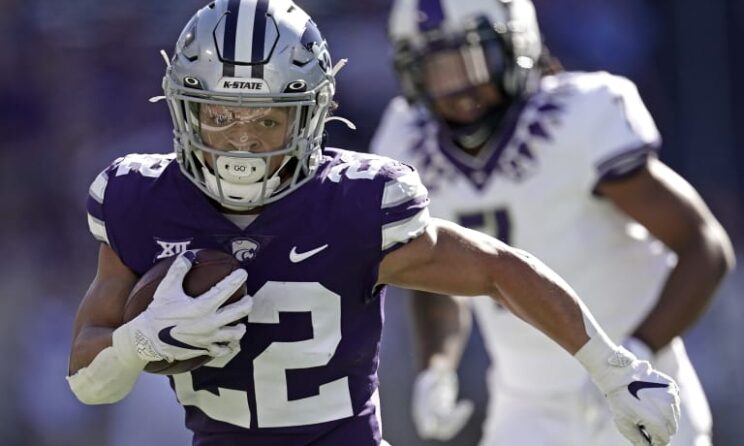 Who are the three most important offensive players for Kansas State?

DY: I wrote a poor question because of course it is Adrian Martinez, Deuce Vaughn and Cooper Beebe.

The addition of Martinez allowed Kansas State to think big for the 2022 season, not take a step back and capitalize on all the returning production from the other positions on the field. Without that, there’d be a huge question mark at the most vital position for a football team.

Vaughn is their firepower on offense. He is the dynamic player and the most explosive one on that side of the ball. Nobody else comes close to that. He is probably good for two or three extra wins per season for the Wildcats, and I’m not sure that is hyperbole.

They are void of weapons without him.

Beebe is perhaps the best offensive lineman on the team. He also gives them the versatility to put their best five on the field because he can play inside and out. That is understating it. He’s K-State’s best tackle and their best guard.

However, because the answer had obvious answers, I’ll bring up a few more that will play a pivotal role for the Wildcats this season due to circumstance, quality or how they factor into the system.

RJ Garcia is one. Malik Knowles has the most upside that we have seen, but he has been inconsistent for about four years. Garcia is discussed as someone with similar potential, and they need another skill position player to emerge.

Don’t sleep on Ben Sinnott. He’s one of the players on the offensive side of the ball that many around the program believe has a professional football future. His versatility at fullback and tight end is valuable.

I also think Taylor Poitier is a solid answer. He starts all 12 games a year ago if he isn’t injured during spring ball. I’m not sure that is arguable. He also takes the sting off losing all three starters from the interior offensive line last season.

FLANDO: Adrian Martinez, Deuce Vaughn and Cooper Beebe. They’re are not only the most important, but they are also the most talented offensive players on the team.

Vaughn doesn’t need much explaining. He is the most talented athlete on the whole team, without question. He is a home run threat at any moment, both rushing and receiving.

The quarterback is a default answer because it is the most important position for every team, regardless of who is under center. However, Martinez brings an athleticism to the position that Kansas State hasn’t seen since Jesse Ertz or Daniel Sams.

He also might have the most explosive arm a K-State quarterback has ever had, rivaling Jake Waters, Josh Freeman and Michael Bishop. If Martinez’s surgically repaired shoulder can hold up and he manages to take care of the football, the Wildcats can have a special season.

Cooper Beebe is also an easy choice. Offensive line play is so important at any level of football. Even with some solid teammates beside him, Beebe has proven he is the best player in the trenches for Kansas State the last two years.

I will add that these choices were considerably easier to make since there isn’t a Tyler Lockett or Jordy Nelson at wide receiver on the team. Malik Knowles still oozes with potential, but he’s been in Manhattan for four years and still hasn’t proven he can produce on a consistent basis.

DREW: The three most important offensive players to me are Adrian Martinez, Deuce Vaughn and Cooper Beebe. It’s a little boring of a pick, but those are three K-Staters on offense that they don’t have an answer for if they were to go down.

There is no one in America who is quite like Vaughn. He is an All-American and Heisman candidate and there isn’t much proven depth behind him.

Beebe also has potential to be an All-American and very well could be a first or second round pick in the NFL draft next April. He is the most important offensive lineman who provides a lot of versatility for the unit.