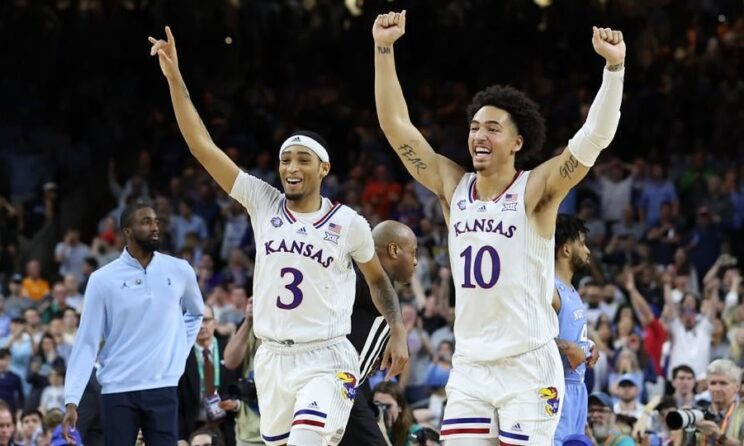 Since the NCAA Tournament expanded to 64 teams in 1985 — and eventually to 68 in 2011 — just two programs have won back-to-back national championships: Duke in 1991 and 1992 and Florida in 2006 and 2007. As the 2022-23 season approaches, Kansas has some significant holes to fill from last season’s roster if it wants to join that elite fraternity of repeat champions.

Following four memorable seasons together, Ochai Agbaji and David McCormack have moved on from KU after playing starring roles in helping lift the Jayhawks to their first title since 2008. Other key contributors from the title-winning squad are departing as well, including versatile wing Christian Braun, offensively explosive guard Remy Martin and venerable big man Mitch Lightfoot.

Though many of the faces in the rotation will be new, two starters do return, and a plethora of talented players are poised to emerge from reserve roles or from the nation’s No. 4 ranked recruiting class to help replace the departed production. Ultimately, a significant drop-off would be surprising for a program that hasn’t missed an NCAA Tournament since 1989.

With a new season drawing closer, let’s take a look at the Kansas roster and try to decipher what the lineup could look like for the Jayhawks as they try to repeat as NCAA Tournament champions.

Harris is one of KU’s two returning starters after logging 29 minutes per game in his redshirt sophomore season. Though undersized and athletically limited, he’s proven to be a steady hand for the Jayhawks in facilitating the offense. Harris also has a knack for ripping opposing ball-handlers and sneaking into passing lanes on defense. Predecessors Devon Dotson, Devonte’ Graham and Frank Mason set the bar quite high at point guard in terms of offensive production. But so long as other players step up to carry the offensive load this season, Harris can keep thriving as a role player.

With three years of Big 12 experience under his belt at Texas Tech, McCullar arrives at KU’s as one of the league’s most-proven perimeter players. He’s a rugged defender and physical presence who can help with distributing and scoring while also handling challenging defensive assignments. His career 29.9% 3-point percentage isn’t great, especially when paired with Harris, who is only an average shooter. But as the No. 19 ranked transfer of the offseason, he’ll be instrumental in helping KU replace Agbaji and Braun.

Dick finished the 2022 recruiting cycle ranked as the No. 21 player in the class by 247Sports. As a McDonald’s All-American and former star for powerhouse Sunrise Christian, the Wichita, Kansas, native figures to make an immediate impact. 247Sports recruiting analyst Brandon Jenkins described Dick as a “long and lean shooter with a strong basketball IQ and great size for the wing position.” Given that KU’s top four 3-point shooters by percentage from last season have departed, Dick’s shooting prowess will be needed.

Wilson’s production stagnated a bit in his redshirt sophomore season while Agbaji and Braun took their play to new heights, but he still averaged 11.1 points. Now, it’s his turn for a breakout year. Wilson can score at all three levels and guard multiple positions, making him the type of versatile weapon that coach Bill Self will rely on in almost any type of lineup. If he can improve on his career 29.8% 3-point mark, Wilson could become a 2023 NBA Draft pick because of that versatility. He’s the most-proven player in a Kansas uniform on this roster.

Clemence appeared in 24 games and logged just 118 total minutes as a true freshman stuck behind a group of veterans last season. But in the time the former four-star prospect did play, he flashed the type of skill set that should get Kansas fans excited for what he can do in an expanded role. For example: in four minutes during the 2021-22 season opener against Michigan State, Clemence scored seven points, hit a 3-pointer and collected two steals. He’s a true stretch big offensively and should be athletic enough to block shots and defend pick and rolls defensively. Physicality may be a concern.

6-5 | 220 | Fr.
Rice earned McDonald’s All-American honors and finished the 2022 recruiting cycle as the No. 37 player in the class, according to 247Sports. He’s listed as a bench option here, but Self made it clear this summer Rice will be in the hunt for a starting job. Though originally from Durham, North Carolina, Rice averaged 20.1 points per game for Prolific Prep in Napa, California, last season. 247Sports recruiting analyst Brandon Jenkins wrote that Rice “has the physical build of a Mack Truck but combines his powerful frame with a great amount of athleticism and skill.”

6-1 | 190 | Fr.
Pettiford played a steady role during the first month of last season until an abdominal injury derailed a promising freshman campaign. Self had no problem deploying Harris and Martin together as an undersized duo in 2021-22, so there should be plenty of minutes available for Pettiford at either guard slot as Self figures out his backcourt rotation.

6-7 | 225 | Soph.
Adams is an incredibly athletic forward who played a utilitarian role in 37 appearances as a true freshman. With an increase in minutes, he could become a human highlight reel for the Jayhawks on both ends. He’s not an outside threat, but he’s the type of player who can make winning plays off the bench and develop into a fan favorite as his career continues to progress.

6-0 | 180 | Jr.
Yesufu burst onto the national scene in the 2020 NCAA Tournament with two huge offensive performances for Drake. Now in his second season at Kansas, he is fighting for a steady role after his minutes waned in last season’s NCAA Tournament run. Though one undersized guard departs in Martin, the return of Harris and Pettiford means there is still a battle for minutes among undersized guards.

Unless Self is ready to embrace a small-ball mantra, the Jayhawks will absolutely need some help in the frontcourt as McCormack and Lightfoot depart. Clemence appears to be a good bet to hold down a starting role, and Adams seems likely to play some power forward off the bench. After that, it looks like three players will have a chance to steal a role in the frontcourt. Ejiofor and Udeh are four-star true freshmen, while Martin is the polar opposite as a sixth-year senior who transferred in from Missouri Southern State before last season. Martin was a Division II All-American who spent last season as a redshirt. Don’t be surprised if one of these three finds their way into the rotation. As a McDonald’s All-American, Udeh certainly has the high school pedigree to make an early impact.