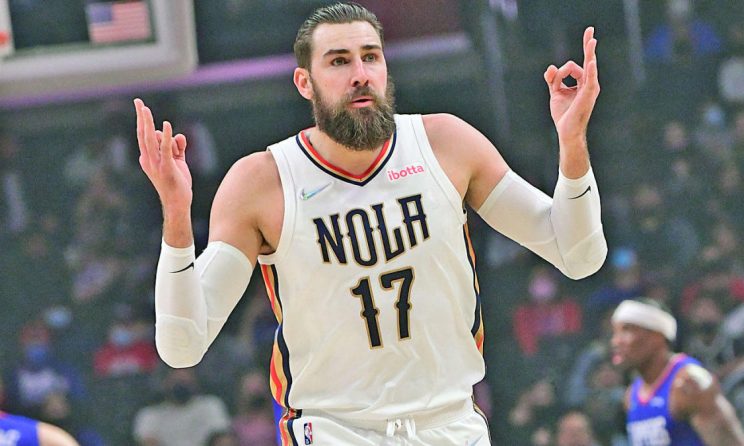 Jonas Valanciunas has turned himself into a pretty big-time offensive player over the past few seasons, and his ability on that end of the floor is one of the main reasons why the New Orleans Pelicans traded for him this summer. But even they could not have expected nights like the one he had on Monday, when he did his best Steph Curry impersonation in a 123-104 win over the Clippers.

Valanciunas hit a 3-pointer for the Pelicans’ first points of the game and never looked back. He finished with a career-high 39 points, 15 rebounds and three assists. His seven 3-pointers, which all came in the first half, were also a career-high.

In the process he became the first player since Trevor Ariza in 2014 to go at least 7 of 7 from 3-point range in one half. Furthermore, he joined Curry as the only players in the league to put up 35 points, 10 rebounds and seven 3s in a game this season. If you want to extend those statistical markers even further, he’s only the fourth player in NBA history with at least 35 points, 15 rebounds and seven 3s.

But no matter which way you look at it, this was a stunning performance from Valanciunas. The Pelicans’ announcers were cackling by his fourth make, and by the sixth one — which rattled around the rim and somehow went down — his teammates were jumping up and down on the bench in a frenzy.

Thanks to Valanciunas’ hot start, the Pelicans jumped out to a 15-point lead after the first quarter and were able to coast from there. His only 3-point attempt in the second half came early in the fourth quarter and had his teammates up off the bench. Unfortunately that one missed so badly it didn’t even hit the rim.

No worries, as Valanciunas closed the show with a breakaway slam that had the Pels’ announcers yelling “dance on ’em, Jonas!”

“The guys were calling him ‘Dirk’ Valanciunas,” Pelicans coach Willie Green said. “But we want him shooting. We want him shooting the ball when he’s open. He still wants to go to the post, which I love about him. He’s a physical guy, but just explaining to him how it’s gonna open our offense up with his ability to shoot the ball the way he can, and it was amazing tonight.”

Expecting Valanciunas to have nights like this on a regular basis is obviously unrealistic, but if he can be a legitimate threat from 3-point range that would do wonders for the Pelicans, especially once Zion Williamson comes back. The Pelicans’ young star is a dominant interior force, and his life would be much easier if Valanciunas can step outside and clear the lane for his dynamic drives to the basket.