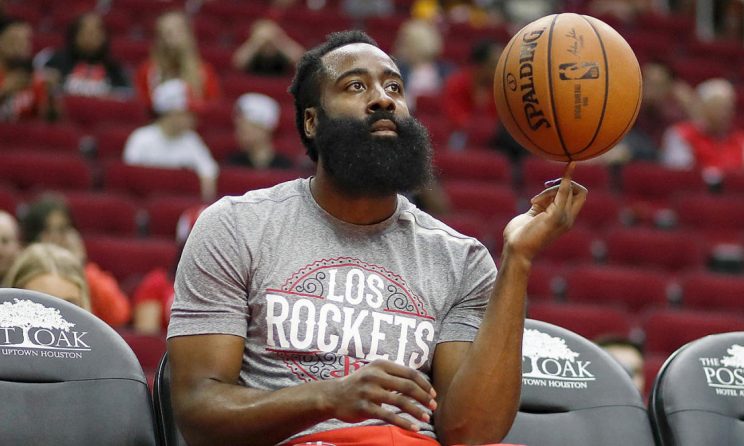 The Houston Rockets began practice for the 2020-21 season on Sunday, but they were without their best player. James Harden missed Houston’s practice due to COVID-19 protocols, according to ESPN. The NBA required players participating in training camp to quarantine in the days leading up to camp, but Harden posted photos of himself attending the birthday party of rapper Lil’ Baby over the weekend. Harden, who reportedly asked Houston for a trade over the offseason, will have to post a negative test before he can join his teammates, which the Rockets are hoping happens soon.

“I’m not exactly sure what hoops he has to jump through in order to practice with the team,” Rockets coach Stephen Silas said of Harden on Sunday. “I would just say I want him here, and I want him to be a big part of what we’re doing. I’m excited to coach him and have him be a part of what we just had out there with a good practice, with a bunch of guys who are working hard on both ends of the floor and had a good vibe about them.”

Despite swirling trade speculation, new Rockets guard John Wall “for sure” expects Harden to remain with the team this season. While speaking with media members Sunday, Wall said he and Harden had a “great talk” after Houston traded Russell Westbrook for Wall earlier in the week, according to Marc Stein of the New York Times. Despite the fact that Harden isn’t yet with the team, his newest teammate isn’t worried, and said that the two are on the same page.

“We’re going to figure out what’s the best decision [regarding] when he wants to get here and be here,” Wall said of Harden. “We’ve been on the same page since I’ve been traded here.”

Even if Harden doesn’t want to be in Houston anymore, the decision is pretty much out of his hands at this point as he still has two years remaining on his current contract. At the very least, Harden is reportedly expected to begin the season as a member of the Rockets. Houston’s front office is clearly hopeful that the addition on Wall will be enough to entice Harden to want to remain with the Rockets, as Harden had a preference of playing with Wall over continuing to play with Westbrook. From ESPN’s Adrian Wojnarowski:

[Harden] had a preference of John Wall over Westbrook, although in the last couple years, Harden has moved teammates in and out. Brought Chris Paul in, moved him out, same with Russell Westbrook now. Whether that’s going to be enough to want to be there long term, Rockets aren’t sure about that. They do have a cushion to work with; remember James Harden is under contract for two more years. So they’re going to start the season with Harden and Wall, and they’re hopeful that John Wall can get back to that All-Star form, a five-time All-Star, former No. 1 overall pick. And if they can get John Wall back playing at a high level, they’re hopeful that that will help to make a case to James Harden.

With the 2020-21 season set to start in a few weeks, it certainly seems like Harden will indeed at least begin the season as a member of the Rockets. Given the years remaining on Harden’s current contract, there’s no reason for the Rockets to rush into a deal. In addition to trading for Wall, the Rockets also added a couple of talented big men in DeMarcus Cousins and Christian Wood over the offseason, and on paper they project as a formidable squad.

If things click, Houston could still be a team capable of making noise in the highly competitive Western Conference, and Harden might change his stance about being traded. This is obviously the best-case scenario for Houston, and it’s far from a guarantee. If things go south, though, the Rockets could still opt to trade Harden prior to the trade deadline, or even next offseason, and still likely receive an attractive return package.