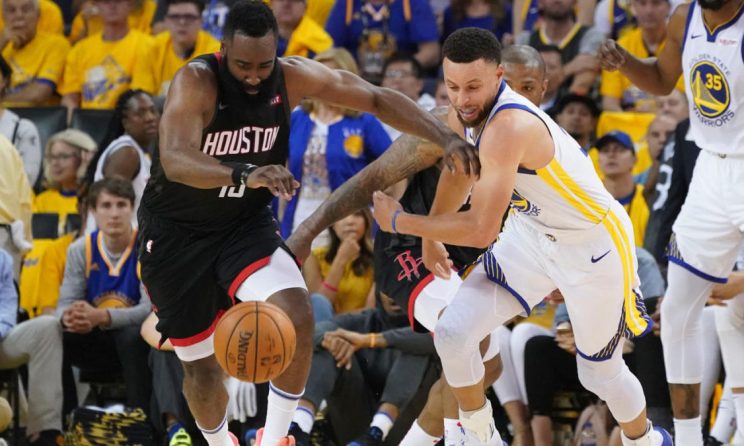 James Harden has made it clear he wants out of Houston, and reports linking him to the Brooklyn Nets are popping up all over the place. Where there’s credible Twitter smoke, there’s usually fire. Harden to Brooklyn is starting to feel like something close to a formality.

But what’s the rush for Houston? Unlike most superstars who throw down trade demands, Harden is not in the walk year of his contract, which is the leverage players lean on as teams become terrified of losing their most premium asset for nothing in free agency. Indeed, Harden has two guaranteed years left on his current deal, and a $46.8 million player option for 2022-23.

In other words, Harden can demand out all he wants, and certainly players of his caliber hold immense sway behind closed doors no matter their contractual situation, but the Rockets do have some legitimate leverage here, which affords them the luxury of patience.

The Cavs were in this situation in the summer of 2017 with Kyrie Irving, who demanded a trade when he still had two years left on his contract. Cleveland decided to rid itself of the headache and traded Irving to Boston, but they didn’t have to. Whether Irving was really prepared to have surgery and sit out the 2017-18 season, as he threatened to do if Cleveland didn’t move him, is another conversation. But either way, the point remains: The Cavs had time. So do the Rockets. They don’t have to take the first deal on the table. They can wait for the best one.

And is this potential Nets package anchored by Spencer Dinwiddie, Caris LeVert, Jarrett Allen and a slew of future draft picks actually the best the Rockets can do for Harden? Remember, the fact that Harden is locked up for the next two years, at least, works both ways. It gives the Rockets leverage, and it incentivizes potential suitors to throw the house at Houston because the normal fear that they might trade for a disgruntled star and then watch him walk the next summer in free agency anyway isn’t a problem. Whoever trades for Harden is getting him for two, perhaps three years of his prime, and you don’t come across that kind of opportunity for a player like this very often.

As such, every team in the league should be calling the Rockets, or at least spitballing offers in their war rooms, and I’m sure that’s happening as we speak. Off the top of my head, Miami should be thinking about a Bam Adebayo/Tyler Herro package. That’s not saying they should do it, but they should be considering it. The Celtics, who own three first-round picks in Wednesday’s draft, could put something very intriguing together behind, say, Jaylen Brown and Marcus Smart.

The 76ers should be considering a Ben Simmons or Joel Embiid deal if necessary, because Harden alongside Simmons or Embiid, whichever one Philadelphia held onto, would be a menacing duo for different reasons. Hell, the Thunder could bring him back and add another piece with their wheelbarrow of draft assets and be conference-final hunting by Friday.

The point is, there is a reasonable Harden package that could be put together by damn near every team in the league, and to me, the elephant in the room is the Golden State Warriors. Full disclosure: I would hate it. The Warriors just got done stacking the deck for three years with Kevin Durant, and I think a lot of people, myself included, are very much looking forward to Steph Curry returning to his completely unleashed ways and seeing if that can still work on a championship level.

But teams don’t think in terms of entertainment and they certainly don’t care about evening out the playing field. The Warriors would love nothing more than to piss off the entire league again by creating yet another borderline perfect basketball team just when everyone thought they had come back to earth.

And they just might have the best package the Rockets can get. Think about it: The Warriors could offer the No. 2 pick in this year’s draft, Minnesota’s 2021 first-round pick (which could end up in the top five in a draft class widely considered to be far better than this year’s), and Andrew Wiggins to make the money work. The Rockets are entering rebuild mode. Wiggins is still just 25 years old and remains a tantalizing prospect if he can ever put it together. Houston would have time to let that process happen, and two potential foundational players over the next two drafts to build around. That’s pretty good.

For the Warriors, it’s a chance to shoot back into the upper-upper crust of contenders. It’s hard to imagine, in fact, that they wouldn’t be the 2021 title favorites with Harden on board. Imagine Harden, one of the greatest one-on-one scorers in history, with the ball in his hands as the two best shooters ever in Curry and Klay Thompson run preoccupied defenses in circles off the ball. The only options teams would have to double Harden would be to come off Draymond Green, and we’ve seen what he is capable of doing as a 4-on-3 playmaker with Curry and Thompson on either side. Any way you slice it, the Warriors would have a field day.

And Golden State’s roster additions wouldn’t have to stop at Harden. Consider this blueprint from my man Sam Quinn, who you should absolutely be following because he’s about as good as it gets when it comes to cap crunching and general transactional knowledge:

Beyond that, you would get great value on veterans flocking to the Warriors on a minimum deal for the chance to win a title. This would get pricey, no doubt. If the Warriors absorb someone into the Iguodala trade exception without sending any money out, that $17 million can actually become a $50 million bill, depending on what other moves the Warriors might make, when you include the tax penalties. In all, the Warriors could find themselves in the neighborhood of a $350 million roster, and revenue will likely continue to nosedive as there might not be any fans at games next season.

But hey, this is the game. You want to be the Yankees? You want to be light years ahead of everyone else? Break out the checkbook, because year-after-year championship contention doesn’t come cheap. The days of the Warriors gaming the system as Curry makes $12 million a year with Thompson and Green on rookie deals are over. It costs from here on out.

There is, of course, a counter to this idea of adding Harden. It’s not often that a team as good as the Warriors has two potential top-five picks to serve as the bridge from one era of dominance to the next. That’s not something you give up easily. You have to ask yourself: Would these next two guaranteed years with Harden be worth foregoing a homegrown future?

Trade those picks, and you’re resigned to building your future roster almost entirely through free agency. It’s not necessarily a terrible option. The Lakers committed to it when they traded basically all their young players and best draft picks for Anthony Davis, and it just got them a title. In the back of their mind, they know they’re the Lakers. Players will always have them at the top of their list, and it would stand to reason the Warriors could think the same way. The teams that have to rely on the draft are teams that can’t lure big-time talent in the marketplace.

But listen, Curry is 32 years old. Thompson and Green have both crested 30. If Harden leaves after two years because he never wanted to go to the Warriors in the first place, and Curry, Thompson and Green have aged out of their primes by then, and the Warriors don’t have any meaningful draft picks to replace those guys, you can see how a steep falloff could happen pretty quickly.

It’s not an easy decision. But a player like Harden, at his age and contract situation, doesn’t become available often, and it just so happens that in the summer that he has, the Warriors are holding two of the best draft picks in the league.

Timing is everything, just like when the salary cap went through the roof in 2016, which just so happened to be the year Kevin Durant became available. Sensing a theme here? Things have tended to break the Warriors way over this dynastic run, and it could be happening again if they feel like picking up the phone and calling the Rockets about Harden. Who knows if they will. Or already have. But the possibility is right there.