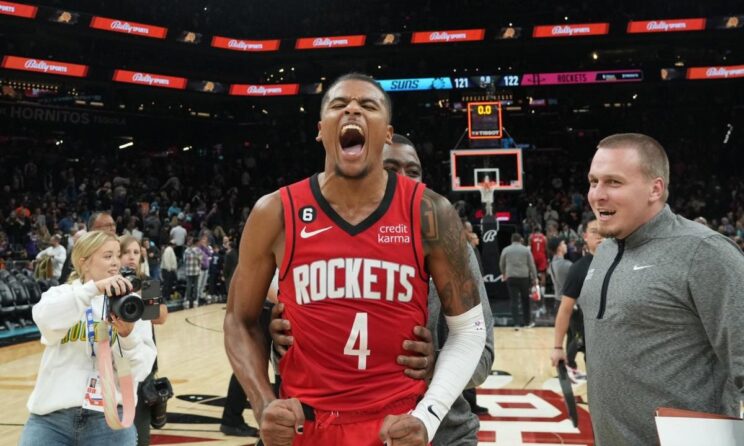 After a pair of uncompetitive losses in Denver, the young Houston Rockets responded with one of their most feel-good victories of the 2022-23 season in Friday’s 122-121 win at Phoenix (box score). The Suns led by 16 points in the second half before the visitors stormed back, headlined by 13-of-19 shooting (68.4%) in the fourth quarter.

The Suns (15-7), who own the best record in the Western Conference, had a six-game winning streak snapped and lost at home for just the second time this season. Meanwhile, the rebuilding Rockets (6-16) won for the first time on a four-game road trip at West contenders.

Jalen Green scored 20 of his team-high 30 points in the third quarter, and he drew a key foul and added a go-ahead free throw in the final 30 seconds to secure the win. Houston won the fourth quarter, 36-25, with Suns star Devin Booker — despite scoring a game-high 41 points — missing a shot at the buzzer that would have won it.

Green made 6-of-10 shots (60.0%) in the third, making for the highest-scoring quarter of his young NBA career, and his 16 free-throw attempts on the game (making 12, or 75%) were a career high. He also contributed with key defensive plays versus Booker, particularly late.

Kevin Porter Jr. had 15 points and a team-high 7 assists for the Rockets, with several going to Fernando late via pick-and-roll scenarios.

Scroll on for highlights, analysis and postgame interviews. Houston finishes out its road trip with Saturday’s matchup at defending NBA champion Golden State, with tipoff at 7:30 p.m. Central.