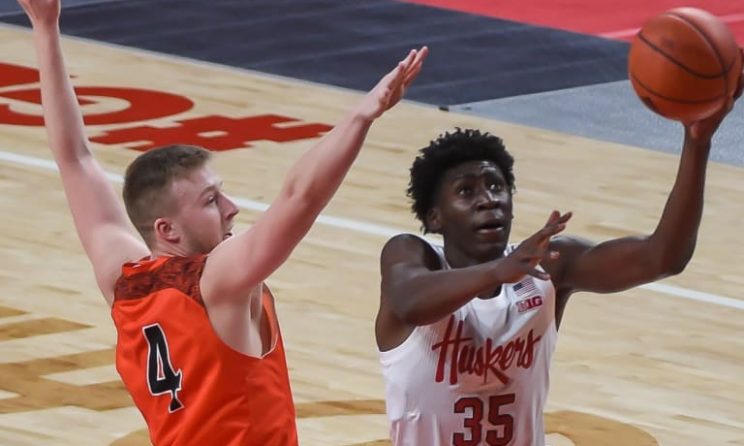 In just the second game of the season on Nov. 12, Nebraska already found itself in a must-win situation when it hosted Sam Houston State on Friday night.

After a frustrating loss to Western Illinois in the opener three days earlier, the Huskers needed to hit the reset button and get back on track in a hurry.

It was hardly a thing of beauty, but NU overcame an ugly start and rallied back from a 10-point deficit to pull out a 74-65 victory.

Bryce McGowens was the X-factor all night, as he finished with a team-high 29 points and five rebounds. The Huskers shot just 40.7 percent from the field and 4-of-22 from 3-point range but made up for it by going 26-for-36 at the free-throw line (19-of-23 in the second half).

Eduardo Andre had 11 points and seven rebounds in 15 minutes off the bench to help Nebraska avoid disaster in a 74-65 win over Sam Houston State on Friday night. (USA Today)

Nothing went Nebraska’s way offensively to start the night. The Huskers had a stretch in the first half where they missed 14 of 15 shots, including 12 in a row, and didn’t make a field goal for over seven minutes.

Sam Houston State capitalized with a 14-3 run and took a 22-12 lead with 7:22 left in the half. Andre came off the bench and provided a needed spark, posting six points and five rebounds in his first eight minutes of action.

But a floater at the buzzer by Savion Flagg, who scored 16 of his game-high 31 points in the first half, sent SHSU into halftime up 32-27.

Sam Houston quickly pushed its lead back up to double digits within the first minutes of the second half, but NU rallied back and pulled with 45-44 on a put-back by C.J. Wilcher with 13:01 left to play.

A 3-pointer by Bryce McGowens highlighted an 11-1 run and put Nebraska up by double digits to seal the win.

Alonzo Verge Jr. had 13 points and seven assists but shot just 4-of-16 from the floor. Eduardo Andre came off the bench and scored 11 points with seven boards, a block, and a steal in 15 minutes of work.

“Obviously, it’s huge for morale,” head coach Fred Hoiberg said. “It’s been a couple somber days for our group. They battled through it. We had a lot of physicality the past couple days of practice, and I thought it carried over tonight.”

1. Adversity hit again, but this time NU found a way

Nebraska got hit in the face with its first blow of adversity in Tuesday night’s season opener, and it could not recover.

It happened again on Friday, and while the Huskers stumbled for the better part of the game, they found a way to regroup and respond when it mattered the most.

After a dismal offensive performance in the first half, NU’s ball movement and execution finally picked up after halftime. Nebraska shot 50 percent from the field and went 19-of-23 from the free-throw line in the second half.

The improvement gave NU a shot in the arm on both ends of the floor and it was able to turn a potential disaster into a relatively comfortable victory.

The Huskers still have a long way to go and only a short amount of time to get there, but at least their second-half response showed that they have some resilience in them.

“I was really proud of them hanging in there when that thing wasn’t going in the hoop,” Hoiberg said. “Obviously, we dug ourselves a hole, and found a way to keep grinding and dig out of it.”

Bryce McGowens had a team-high 15 points in the exhibition win over Colorado and then 25 in the loss to Western Illinois, so scoring production hadn’t been lacking from the former five-star freshman.

Friday was another breakout scoring night for McGowens, but this one looked a lot different from the others.

McGowens’ 29 points tied for the second-highest total ever by a Nebraska freshman (Ryan Anderson in 2006-07 and Shavon Shields in 2012-13) and were just one shy of Tyronn Lue’s freshman record of 30.

He also became just the second Husker freshman to post multiple 25-point games in a season, joining only Dave Hoppen in 1982-83.

“Really just letting everything come to me instead of forcing everything,” McGowens said. “Going into tonight’s game after the loss we took the first game, Coach really just said, ‘Let it flow.’ I felt like we moved the ball much better, and it showed in the outcome.”

3. Verge’s hot-and-cold play is an issue

Looking at the final stats, it would seem as Verge was an integral part of Nebraska’s offensive success against Sam Houston State.

The graduate transfer guard from Arizona State was second on the team in scoring with 13 points and led the Huskers with seven of their 10 total assists in the win.

However, there was just as much bad with Verge’s performance as there was good.

Verge was just 4-of-13 from the field (1-of-7 in the first half), missed all four of his 3-pointers, and turned the ball over a team-high three times.

As NU’s primary point guard, the ball once again seemed to stick in Verge’s hands for far too long, just like it did last time out vs. Western Illinois. He missed open teammates on the perimeter and forced low-percentage shots in traffic far too often.

When Verge is good, he’s really good. But when he reverts to his ball-dominant, iso-game ways, Nebraska’s offense suffers as a result.

“I just talked to him, and we’re going to have a good film session on Sunday just to make sure we see where the outlets are,” Hoiberg said. “He’s got such a scorer’s mentality, and he’s such a talented basketball player, he can make tough shots, but we don’t always need that.

“That’s part of the growth and learning curve as he plays pretty much exclusively with the ball in hands, where he has played more off the ball early on in his career. Just make sure he’s got that mentality.

“He’s a very capable passer, and that shows by the seven assists. But it’s just about going out there and making sure we make the right play, make the right read, and get a good quality shot on the board.”

“I thought the key person to this whole night was Eduardo. He just gave us such a spark out there when we needed it the most… Just a really complete game, and I’m happy for him. He’s been working his tail off, and to get this opportunity is something that we talk to our guys about all the time, taking advantage of it when your name’s called. He certainly went out and had a huge impact on this win.”

— Head coach Fred Hoiberg on the spark that freshman center Eduardo Andre provided off the bench.