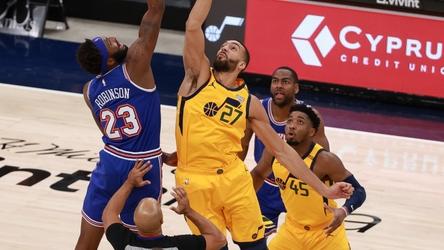 A few Knicks-Nets notes as the NBA playoffs continue:

Teams continue to monitor the situation in Utah after the Jazz’s first-round loss to the Dallas Mavericks.

For obvious reasons, Mitchell’s future has garnered the most attention among Knicks fans.

But Gobert’s situation could have an impact on New York as well.

If the Jazz trade Gobert, it would impact the market for Mitchell Robinson this summer.

Could Utah then be a suitor for Robinson? The Detroit Pistons are among the teams that had interest in Robinson prior to the February trade deadline.

Robinson and the Knicks can agree to an extension until June 30. The two sides discussed an extension over the course of the season. At one point prior to the trade deadline, the sides were far apart on the numbers for a possible extension. Based on that, it seems that Robinson will enter the summer as a restricted free agent.

DeAndre Ayton, Jusuf Nurkic and Nic Claxton are among a group of centers who enter the summer as free agents (Ayton and Claxton are restricted free agents). Gobert’s situation in Utah could impact their markets as well.

One note on Gobert: The Toronto Raptors are among the teams who would have a degree of interest in trading for him if he’s made available, sources say. Would Brooklyn be interested in Gobert? The Nets would need to include Ben Simmons in almost any trade to satisfy salary requirements.

Eddie Gonzalez of The ETCs Podcast sat down with Kyrie Irving for an in-depth interview recently. Irving touched on several topics, including his absence due to his COVID-19 vaccine status and local COVID ordinances, his fitness during the season, and his absence from the NBA’s 75th anniversary team.

All NBA fans seem to have a strong opinion on Irving. Some love him, pointing to his elite skill and countless philanthropic efforts. Others despise him, citing his lack of availability to Brooklyn over the past three years.

Regardless of where you stand on Irving, the entire podcast is worth your time if you’re an NBA fan.

At one point in the conversation, Irving said he felt the Nets may have traded him while he was away from the team. The Nets, as you remember, initially decided to keep Irving away from the team because he was ineligible to play home games. The club later decided to reinstate Irving and allow him to play road games.

Irving talked about his uncertainty while he was away from the club.

Several outlets, including SNY, reported that the Nets had been open to talking to teams about potential Irving trades during that time. Obviously, nothing came to fruition. But some members of the Lakers organization discussed the possibility of trading for Irving during that stretch of the season, sources say.

The deal would have obviously reunited Irving with LeBron James. It’s unclear if the Lakers reached any internal consensus on Irving at the time. And it doesn’t really matter at this point. Given where Brooklyn is at the moment, it would be surprising if the club didn’t sign Irving to a multi-year extension/new contract this summer as it continues to pursue a title.

Marc Stein previously mentioned Toronto as a potential Gobert suitor on a podcast.