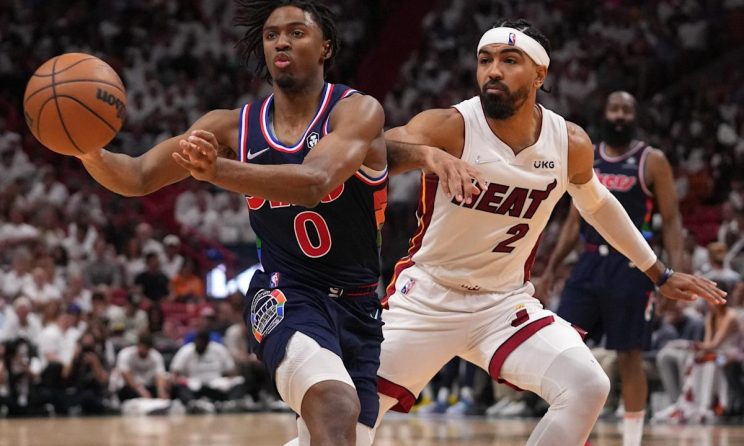 MIAMI — The Philadelphia 76ers find themselves trailing the Miami Heat 0-2 in their Eastern Conference semifinal series, but they have gotten a boost out of young Tyrese Maxey in this series.

Maxey realized that the Heat don’t have anybody to stay in front of him and he had 23 points in the second half on his way to 34 for the game in Wednesday’s Game 2 loss to Miami. He was really the only Sixer who was a consistent offensive force on that end throughout the game.

Heat coach Erik Spoelstra is still searching for a way to defend Maxey and that is going to be something that he is looking to work on for the rest of this series.

“You have a lot of tendencies and game plan stuff, but the speed is unique,” Spoelstra said. “It’s one thing to watch it on the film and then go through it and experience it is different and he’s just gaining a lot of confidence. His ability to get in the paint and break the defense down, it’s something we have to contain.”

Maxey was able to get out in transition and then he was able to attack in the half-court. He had a tough start to the game on Wednesday, but the Sixers did an excellent job of getting him going and into a rhythm.

“They don’t have anybody that can really slide with him all throughout in the half court,” Tobias Harris. “Him just getting downhill, especially in the fast break. When we get the rebound, we are going and pushing. He’s the first guy that we look for to get out and get in front and create.”

The Sixers will need Maxey to continue his strong play on Friday as Philadelphia looks to avoid an 0-3 hole with the Heat at home.

Sixers listing star Joel Embiid out for Game 3 vs. Heat, could change

Sixers admit Matisse Thybulle has been a little off against Heat