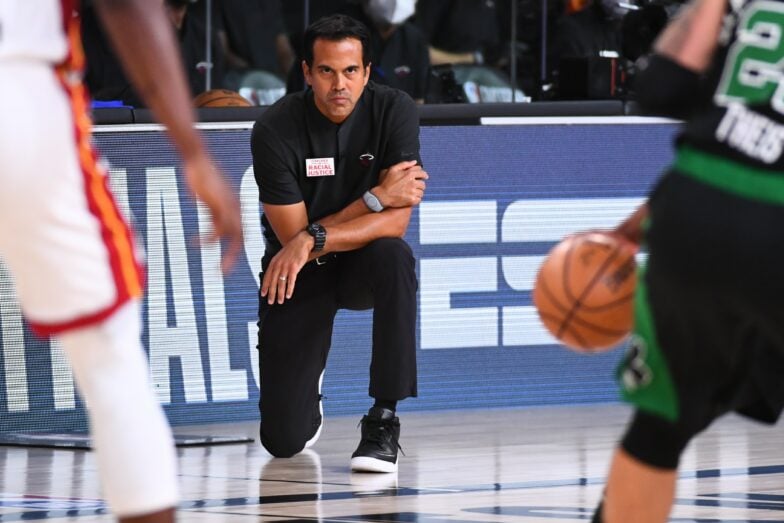 In the article provided by Ira Winderman of South Florida Sun Sentinel, Spoelstra urged the league to review the mandates about the vaccines, symptomatic and asymptomatic players, and more importantly, the prolonged layoff of those who are under monitoring.

“I think we all have to figure this out right now,” Spoelstra said. “Are players missing games because they’re symptomatic? Or are they asymptomatic? Has everybody gotten their shots and their boosters? Why would they be held out extensively longer than if they have the flu?

“I think there’s a contradiction there and if you just go hunting for, and add more testing and try to find things, you probably will.”

His Heat cager, Caleb Martin, who dropped career-high 28 markers against the Milwaukee Bucks on Wednesday, was ruled out against the Chicago Bulls on Saturday upon testing positive in COVID-19 in spite of being healthy.

“He was frustrated,” Spoelstra told reporters. “Come on, the guy came off the best game of his career as a professional athlete. He was preparing for [Saturday’s] game to play. And he felt like he could play. I understand his frustration. I feel for him. These are extraordinary times. They’re not like normal times from two years ago.

“But having asymptomatic players sitting out. I don’t know if that’s the answer or for losing extended periods of time, two weeks or 10 days, without any course of recourse to that.”

The number of players entering the quarantine stage continues to balloon as days go by. While this has to be a mandatory measure to strictly secure everyone’s wellness, the NBA still has to craft better and much clearer rules on countering the swirling questions and uncertainty about unavailability and safety, especially as the threatful Omicron variant is imposing around the world.

On Sunday, Adrian Wojnarowski of ESPN reported that two Bulls players — including star shooting guard Zach LaVine — have entered the league protocols, leaving the squad with only nine players who are eligible to play. Chi-town has an option to postpone their upcoming match against the Detroit Pistons on Tuesday.

Miami, though being undermanned upon the absences of Jimmy Butler, Bam Adebayo, Markieff Morris and four other hoopers, remains competitive and in the grasp of the 4th place of the Eastern Conference. They are continuing to rely on the outputs of veteran point guard Kyle Lowry, sharpshooter Duncan Robinson, and rising star Tyler Herro.

The Heat is set for a square-off against the talented Cleveland Cavaliers team on Monday evening.