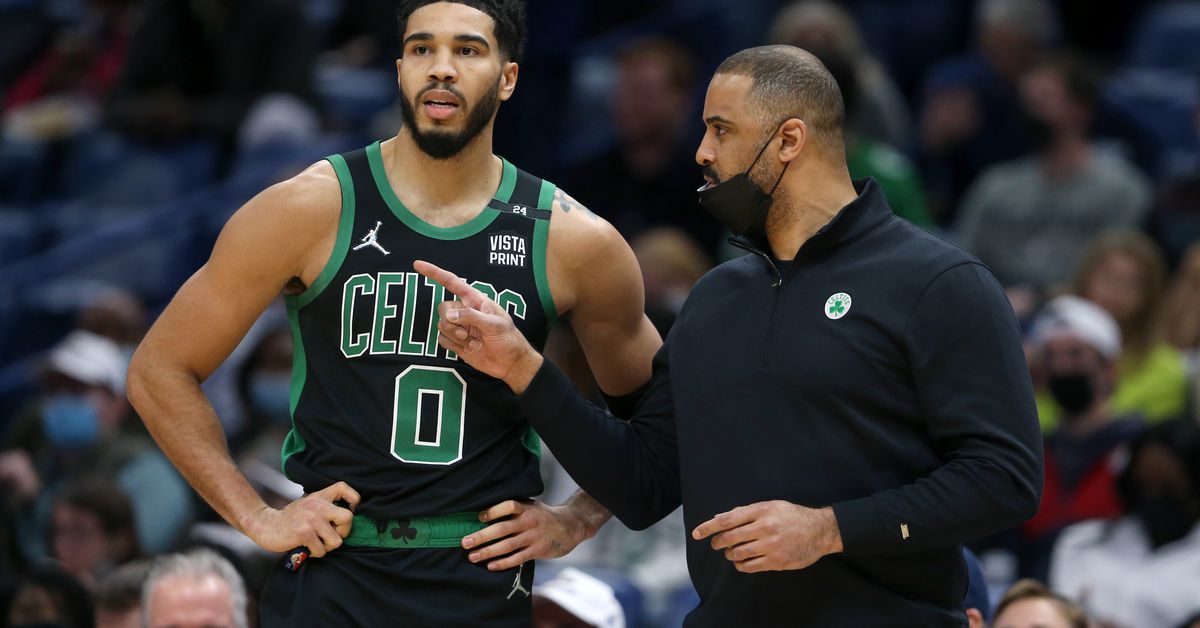 It’s been a confusing season thus far for the Boston Celtics. Somehow it seems they’ve both underachieved and overachieved all at once. Twice they’ve beaten the defending champion Milwaukee Bucks, and yet they’ve also authoring some major fourth quarter collapses. Through the tumult, it’s a little unclear who or what this C’s team really is.

A few key stats jump off the page, however, and they may be useful for defining this team. Certainly they underscore certain trends worth monitoring as winter turns to spring the a playoff run comes into view. There’s a lot of basketball left to be played, but here’s a couple of intriguing data points for Celtics fans to consider.

Boston’s woes in the final frame are well-documented. The team has had some epic struggles in the fourth quarter of games this season. Their -4.8 Q4 Net Rating – the sixth worst mark in the NBA – only scratches the surface.
The Celtics own the 24th ranked offensive rating in fourth quarters this season. Not surprising considering Boston’s rather average offense overall.

At the same time, though, Boston slips to 23rd in fourth quarter defensive rating. This is much more problematic. This Celtics club is hanging its hat on D, but with the game on the line, things have consistently fallen apart.

With a floundering defense in the fourth, that average Celtics offense becomes especially troublesome. In the final period, Boston has the fourth worst eFG percent and the third worst assist/turnover ratio.

Boston’s fourth quarter performance this season comes with an exciting silver-lining. (More on that in a second.) But thus far head coach Ime Udoka’s team has struggled mightily closing out games.

That the Celtics are lacking in shooting isn’t exactly surprising. There aren’t any bonafide sharp-shooters on the roster. And the players who can occasionally stroke it have come up ice cold this year. That 51.8 team eFG percent puts the C’s just behind the Kings and just ahead of the Knicks.

Worse still, Boston ranks 11th in three-point attempts per game in the Association, yet is connecting on only 34 percent of attempts. This in and of itself is a big problem for the Celtics. Jayson Tatum, Marcus Smart, and Al Horford have been particularly ineffective from distance.

Perhaps it’s the new ball. Maybe it’s a the effects of ramping back up from COVID. Whatever the case, Boston’s offense features a lot of threes and a lot of unassisted looks from mid-range. Udoka’s system simply cannot succeed if players can’t find their shooting touch.

There is a bright side here. Both Grant Williams and Josh Richardson are having career years from beyond the arc. Though they still both average fewer than four attempts per game, there are

After a bit of a rocky start to the season, Jayson Tatum has begun to come alive as of late. That’s big news for the Celtics – usually an NBA team will go as far as their best player takes them.

Tatum’s shooting and shot-making haven’t exactly inspired thus far this year. He could stand to take it to the rim a little more, and when he’s off, his iso-ball can be maddening.

That said, the tide may be turning. He’s been on fire as of late, punctuated by a recent 50-point explosion, just the twelfth such game in Celtics regular season history. Tatum’s 26.2 points per game is good for seventh in the entire NBA, and overall, Big Deuce has the sixth highest Win Above Replacement number according to the Bothans at FiveThirtyEight.

Statistically, Tatum is arguably within striking distance of the MVP conversation. It would take a considerable string of wins by the Celtics for that conversation to begin in earnest, however.

Where JT is really making an impact is the last quarter. In the final frame of games, Tatum is averaging 6.6 points fourth period. That’s tied with Kevin Durant and just behind LeBron James, by the way.

It’s worth noting that Tatum’s fourth quarter performances haven’t been particularly efficient. His shooting splits, assist rate, and free throw attempts are not quite as polished as his peers at the top of the Q4 scoring list. Still, Boston desperately needs something reliable in the fourth. (Jaylen Brown’s numbers in the fourth are rather stinky.)

Tatum and Brown are still very, very young as far as NBA stars go. Players usually reach their prime in their late 20s, and with exception, 23-year olds don’t usually lead teams to titles. The future is bright for the Jays. But at present, they’re still too young to necessarily know how to co-manage an offense, especially given their positional overlap.

Boston needs a maestro, someone to quarterback things for the team’s two stars and its glut of rotational players. Dennis Schröder is not the man for the job.

At times during his career, Schröder would have fit the bill. In his final run with Atlanta, Dennis was averaging north of six assists per game. “German Rondo” might have been a little much, but it was somewhat of an apt comparison.

More recently with OKC, Schröder proved a surprising off-ball threat while maintaining a penchant for getting to the rim. He also has, historically, been a good to great defender.

Unfortunately for Schröder, he hasn’t been able to recapture some of that magic. He isn’t the pass-first point guard this team truly needs. Nor is he a complimentary or reliable third offensive weapon alongside the Jays.

Schröder could be an intriguing sixth man, although his days in Boston are likely numbered. Should he survive the trade deadline, there’s a world where a reimagined role could give Dennis an opportunity to get touches and impact the game without necessarily upending the starting unit’s rhythm.

Dennis is far from the only underwhelming role player for Boston this season. As mentioned above, Smart and Horford’s inconsistency has been a real issue for the C’s. It’s anyone’s guess what happens next for Romeo Langford, Payton Pritchard, or Aaron Nesmith.

Maybe this is an average team, and Boston’s persistent .500 record is not all that much of a mystery. If the Celtics were a little better in the fourth and their record was just a smidge more win-heavy, would the team’s ultimate fate be all that different?

Robert Williams looks like the real deal for Boston. He could be a key cog for this team when or if they rejoin the contention conversation. In terms of ceilings, though, things begin and end with the Jays.

Four times this season Jayson Tatum and Jaylen Brown have each notched 30+ points in a game. That ties the record for a Celtics duo, held by Larry Bird and Kevin McHale. Go ahead and re-read that as needed.

Conversations about breaking up Brown and Tatum are dangerously premature. Boston employs two of the NBA’s most athletic and exciting wing players, neither of whom are done getting better. Though some of the growing pains and speed bumps have been ugly, but when it clicks, the Celtics look downright scary.

On any given night, Boston might have the best two players on the floor. Only the very best in the league can say that. No matter what happens with the young talent, the misfit vets, or anything else, Brown and Tatum provide the Celtics something really special.