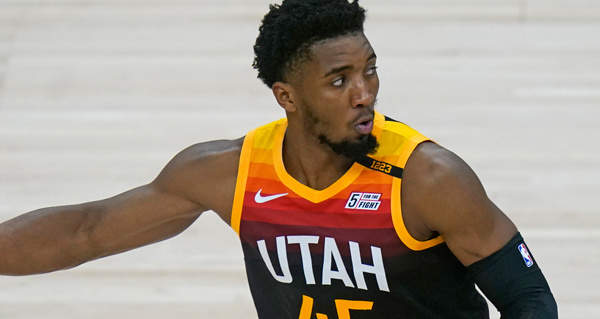 Donovan Mitchell had a one-on-one interview with Chris Haynes of Yahoo! Sports this week as he attempted to clear the air on his situation with Rudy Gobert. Mitchell and Gobert have reportedly had a tenuous relationship at times during their tenure together with the Utah Jazz.

“First of all, we’re good. I just want to go on record with saying that,” Mitchell told Yahoo Sports. “I think it’s interesting that stuff happens, and he and I have never played at this high of a level together since we’ve been here. So I make the joke, ‘For a group that hates each other, man, we’re playing pretty well.’

“And we can be even better. We’re good. We’re focused on winning. We have a common goal. I think that’s the biggest thing. You don’t always have to be the best of friends with people you work with. But at the end of the day, if you work towards a common goal that’s beneficial to the team, that’s what’s first. We want to win, and I don’t think either of us are worried about what’s being said around us.”

Mitchell’s future with the Jazz is dependent on two factors: family and the opportunity to be a continual title contender.

“I think I’ve reached a point where you’re happy with yourself, first off,” Mitchell told Yahoo Sports. “… But as far as myself with the franchise, I see the articles, but I really address it with my teammates. I’ve seen it. I’m not too stressed about it. I’m not thinking about it. Because for me, it’s about how we can win.

“There’s going to be talk whether I say something, whether I don’t say something because that’s how I’ve always been. I’ve always been someone that’s like, ‘OK, they’re saying stuff. Let’s go ahead and lock in.’ I haven’t really thought too much about it. I’m happy right now and just continuing to find ways to win.”