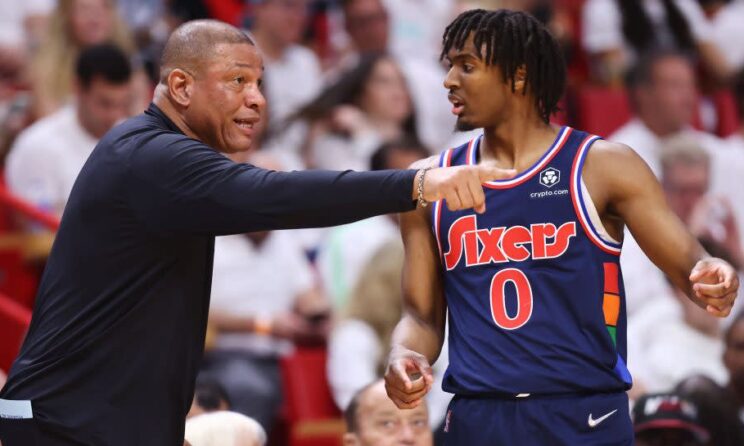 Two things are true. First, Tyrese Maxey has been a find for the Philadelphia 76ers. Selected No. 21 in the 2020 NBA Draft, he’s one of the latest in a long line of guards who came out of Kentucky and looked much better in an NBA system than John Calipari’s (Devin Booker, Shai Gilgeous-Alexander, Tyler Herro, Jamal Murray, De’Aaron Fox… and the list goes on).

Combine the two and you get Doc Rivers going over the top in praising Maxey while on ESPN’s “The VC Show” podcast with Vince Carter (hat tip NBC Sports Philadelphia).

“He’s the most impressive young player I’ve ever had, in 21 years of coaching. His work ethic, Vince, is beyond belief. Many times already this summer, already two or three times, we’ve had to tell him to go sit down somewhere and go relax.

“He works with Sam Cassell and my son Spencer, they’re skill-developing coaches. He called Spencer two weeks ago because, I guess like Ros, he went on vacation. The difference, Ros, is this is the first vacation he’d ever been on in his entire life. That’s what he was telling us. I was like, ‘Wait, what?’ He was like, ‘No, I’ve never been on vacation. He asked Spencer, ‘What do you do on vacation?’ True question, what do you do on vacation? And Spence was like, ‘You relax!’ And [Tyrese goes], ‘For how long? For how many days? We’re going for a week, I can’t relax for a week.’”

That’s a fantastic anecdote, and Maxey is poised for a big step forward in his third season. How Maxey will settle in if, as expected, James Harden takes over more of the playmaking duties in Philly is something to watch. However, last season after the All-Star break — when Harden was in the mix for the 76ers — Maxey’s scoring went up a little but his efficiency went through the roof — 65.5 true shooting percentage, 48% from 3. If Maxey can find that groove again, the 76ers become that much more dangerous.

Maxey is extension eligible after this coming season and the 76ers will gladly pay him the max if he keeps performing at this level.

We know at least Maxey has Doc Rivers in his corner.

Check out more on the 76ers

Doc Rivers pumps up Tyrese Maxey, “the most impressive young player I’ve ever had” originally appeared on NBCSports.com