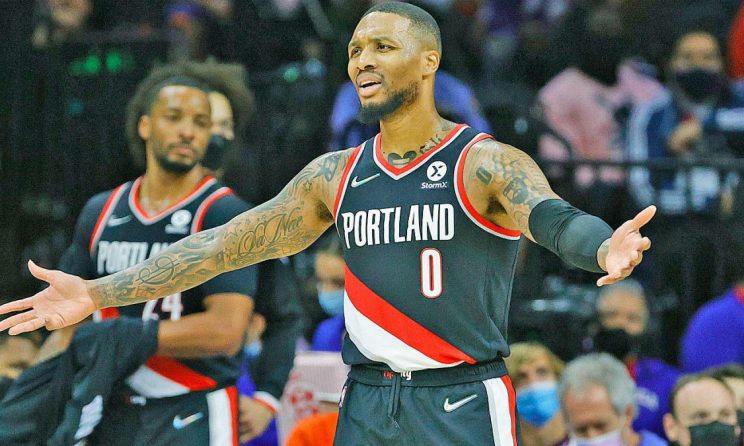 Damian Lillard was just named to the NBA’s 75th anniversary all-time team. He has been one of the league’s best 15 players, at the very worst, over the last half decade. In a world where Stephen Curry didn’t exist, he’d have long established himself as the scariest off-the-dribble 3-point shooter probably to ever play.

This cold streak he’s on to start the season — even understanding that all players, even great ones, endure more extended rough shooting stretches than your common fan might realize — is starting to feel crazy.

After an 0-for-6 showing from 3 on Friday, Lillard is now shooting 21 percent from deep on the young season, and even that number is being propped up by one 5-for-7 night. Throw that out, and Lillard is shooting 17 percent over eight games. He has missed 34 of his last 41 from deep.

Luckily for the Blazers, they escaped with a 110-106 win over the visiting Pacers on Friday. Lillard, the only Portland starter with a negative point differential, had four points. Four. It matched the lowest single-game scoring output of his career, per StatMuse.

The Blazers, who let a 19-point lead get away before rallying from a nine-point fourth-quarter deficit, survived down the stretch on the strength of two huge 3-pointers from Robert Covington, who hit five 3s in the second half, and CJ McCollum’s 27 points. They are 4-5 on the season, treading water until Lillard can find his stroke.

But that can’t last long. Portland is a deeper team this season, and the defense is ever-so-slightly better, but you can turn out the lights if Lillard doesn’t get back to being himself. There isn’t a team in the league more dependent on its superstar than the Blazers.

The good news is this won’t continue. It can’t. Lillard is going to get going. But the question is when. The Blazers do not have a big margin for error. If this slump lasts another few weeks — or worse, longer — Portland could find itself in such a hole that making the top six in the Western Conference and avoiding the play-in tournament would become an even taller order than it already is.