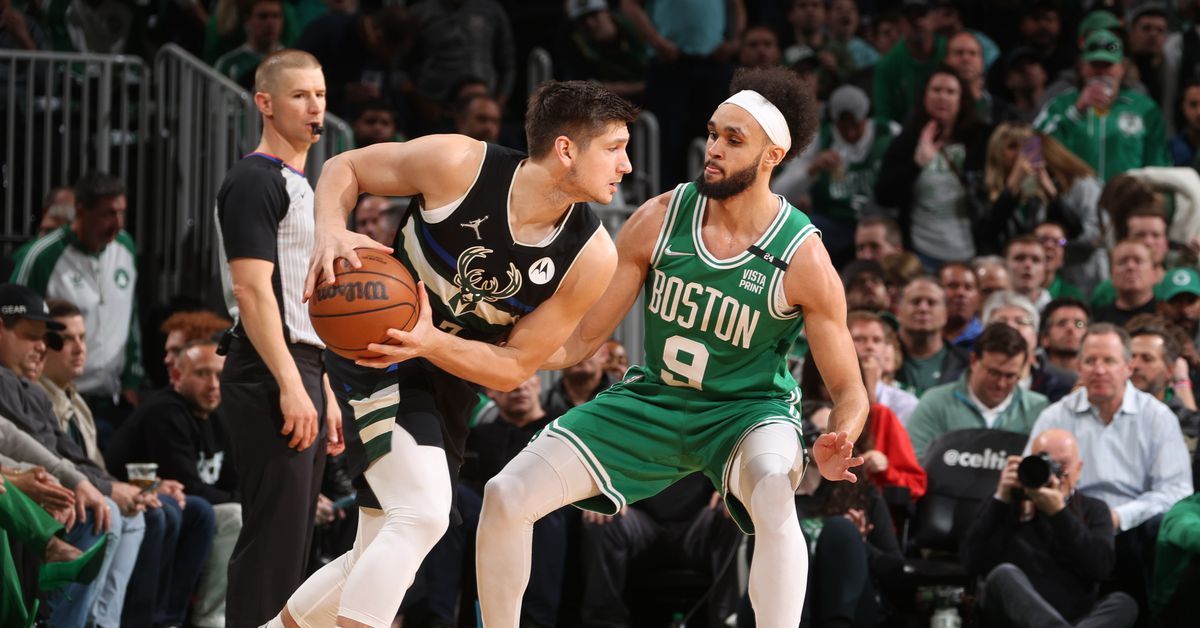 When the Boston Celtics acquired Derrick White from the San Antonio Spurs at the 2022 trade deadline, it was for situations like Game 2 of the second round against the Milwaukee Bucks. Brad Stevens is more acutely aware than anyone what the absence of a key player can do in big playoff games, and he was trying to assure that Boston would have depth when they need it.

With Marcus Smart shelved due to a quad contusion, White got the start. While the Celtics rolled to a blowout victory to even the series at 1-1, White took some heat. He was 0-for-6 from the floor, including 0-for-4 from behind the arc. But on the flip side, White was tied for a team-best +22 for the game. That matched Grant Williams’ plus/minus and Williams left the game as one of the stars.

Here’s where we point out that plus/minus can be a weird stat in totality, and even weirder when used in a single-game context. But…White had to have been doing something well, right?

Upon review, there was lots to be enthused about with White’s game. So, let’s dive in!

Let’s start with some more stats. Yes, White was scoreless, but he did exactly what Ime Udoka asked of him. He ran the offense and played defense. White finished with five assists, four rebounds, one steal and only two turnovers in more than 28 minutes.

If we dive a little deeper and get into the matchup stats, a couple of themes emerge. Despite both White and Jrue Holiday being their teams’ nominal point guard, neither really guarded the other very much. White spent the majority of his time guarding Wesley Matthews and Grayson Allen. He was a big part of helping to hold that wing duo to just six total field goal attempts. This was after Allen dropped in 11 points on eight attempts in Game 1.

But let’s go a little deeper and look at a clip. There’s no traditional stat here for White, but he makes this play happen:

This is one of Milwaukee’s pet sets to free up Allen for a shot. White does a good job initially of getting skinny around the screen from Brook Lopez to make sure Allen can’t catch and shoot. As Allen drives, White hands him off to Grant Williams, per Boston’s switching principles. Then, as Rob Williams comes over to contest, White does a really nice job with the box out on Lopez to keep him off the board. No stats, but great defense from White against two different players on the same play.

According to the NBA’s tracking data, White only guarding Giannis Antetokounmpo for one possession in Game 2. But he did a good job with that one possession:

Normally a smaller player like White is free lunch for Antetokounmpo. He’s going to put a shoulder into that player and power over them for a finish. White did a good job on this play of staying in front of Antetokounmpo, but not letting Giannis make body contact with him. That led to the contested floater. Yes, Antetokounmpo got the offensive rebound and got fouled, but that’s not really on White. He did his job and needs his bigs to finish the play with the rebound. Also, notice how quickly Antetokounmpo is up on his second jump for the board. That’s impossible to contain.

Ok…so White played some pretty good defense, as he must have to finish +22 in a game where he scored zero points. But what happened on the offensive end?

First, some more non-traditional stats! The player who guarded White the most was Pat Connaughton. That’s Milwaukee “hiding” Connaughton on Boston’s weakest offensive player. But there’s a bit of a catch. Most of the possessions where Connaughton guarded White were in the first half.

In the second half, Milwaukee switched Antetokounmpo onto White and gave him the job of pressuring White up the floor. Now, there are absolutely no stats to back this up, but Giannis guarding 94 feet for multiple possessions in a row, while trying to create all of the Bucks offense, had him looking absolutely gassed by early in the fourth quarter.

In the halfcourt, White didn’t make things easy on Antetokounmpo either. He’d start plays by staying near the arc, which pulled Antetokounmpo out with him. But White didn’t just drift around the perimeter. He was constantly cutting and moving, which kept Giannis attention. Essentially, despite Giannis being in a roamer/helper role of White, he had to stay at least partially engaged with White’s movement, which helped to free up Jayson Tatum for a lot of his scoring opportunities in the second half.

White was also a big part of Boston pushing pace throughout the game to get Boston easy offense. Here’s a good example:

White snags this rebound and he’s off. He does a good job of slowing things up just enough to let Al Horford sprint into the lane before dropping the perfect pass on him for the layup.

We’re going to show two more plays, both ones where White picked up assists, because they are good examples of that “Spurs 0.5” stuff. The idea is to catch and do something within 0.5 seconds. It can be to shoot, pass, drive, dribble into another action, or anything else. It’s just about not holding the ball and making quick reads to make the defense react.

Here’s White on what looks like a simple swing pass, but there’s a bit more context. White does a good job of putting himself in place to get the pass from Jayson Tatum after reading the incoming trap. Then he makes the quick swing to find Jaylen Brown, who was absolutely on fire, for the three:

If White is even a split second late delivering this pass, Brown doesn’t get the shot off.

Later in the game, with the Bucks huffing and puffing, White pulls out another 0.5 decision. He catches this kickout pass from Tatum and he could have shot. But knowing the time and score (and probably that he’s on an O-fer himself!), White drives the closeout off the catch. He sees Tatum relocating after the drive and the pass is on-time for Tatum to hit the dagger three:

Was Derrick White perfect in Game 2? Nope. Not even close. Did he play well despite not scoring? Absolutely. It was a pretty good Marcus Smart impression, minus the dramatic plays where Smart is doing Smart stuff.

Most importantly? White took little off the table, despite the 0-for-6 night from the floor. Yes, at some point, probably in a big spot, White is going to have to knock down a jumper or two. Whether it’s the Bucks or someone else, teams will begin to dare him to shoot until he proves he can make them.

But for now, as long as he focuses on playing defense, pushing pace and moving the ball, White is contributing. And that’s really all the Celtics need him to do.