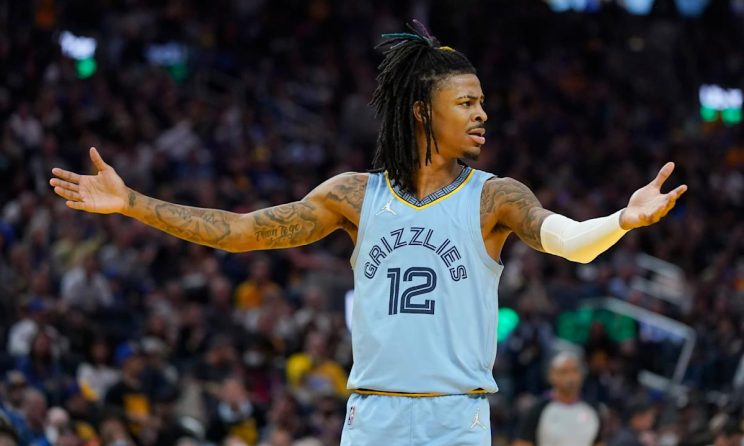 SAN FRANCISCO — Ja Morant limped off, the Golden State Warriors went off, then Taylor Jenkins and the Memphis Grizzlies sounded off.

Every game, it’s something new in this young versus old, establishment versus new kids playoff series. You can’t tell if this is the start of a contentious rivalry or independent odd occurrences happening in close proximity.

Morant, the excitable and flexible Grizzlies star, appeared to injure his knee. Then the Grizzlies pointed in the direction of Warriors guard Jordan Poole, claiming he yanked Morant’s right knee during a play with 6:55 left in the fourth quarter in the Warriors’ resounding Game 3 win at Chase Center.

It’s impossible to determine intent, especially in slow motion where belief would have to be suspended in such a moment for Poole to intentionally grab at Morant’s knee while he and Andrew Wiggins were trapping him.

Poole’s arm did make contact with Morant’s knee as he was reaching for the ball, but how much torque and strength was in that contact is anybody’s guess, and a matter of interpretation.

Morant tweeted and later deleted a video of the play, with the caption “broke the code” — a strong insinuation that Poole was committing a dirty infraction.

Memphis Grizzlies guard Ja Morant reacts to an official’s call during Game 3 of the Western Conference semifinal series against the Golden State Warriors in San Francisco on May 7, 2022. (AP Photo/Jeff Chiu)

Tacitly or not, the Grizzlies are making it known what they believe and want some attention brought to it. It’s part gamesmanship, part grief, part naivete, the inertia of the playoffs.

“It looked to me that they bumped knees before he even reached,” Draymond Green said. “That’s kind of what I thought I saw.”

Green was at the center of the first altercation of sorts in this weird series with his flagrant 2 foul on Brandon Clarke in Game 1. Clarke seemed to intimate Green is a dirty player in his postgame news conference.

Saturday, it was Jenkins’ turn at the podium, and although he didn’t go as far as Clarke, it’s another game where the Grizzlies, after a loss, are pointing the finger in the direction of the Warriors.

It’s a 2-1 series now, but one wonders if the Warriors have figured out their opponents. Being more physical is one thing, but it appears certain the Warriors have taken up real estate in the Grizzlies’ psyche.

“He was going after a dribble and Jordan Poole actually grabbed his knee and yanked it, which kind of triggered whatever happened,” Jenkins said. “So I’m actually going to be very curious to see what happens after that.”

That’s probably as strong a call to action for the NBA to review the play as it can be for someone in Jenkins’ position — a good coach but one who doesn’t have a footprint in the league landscape to vociferously go after a franchise with championship equity.

More importantly, it obscures the fact the Warriors put a 2015-like beatdown on the Grizzlies, illustrating the gap between the two teams. The Grizzlies are still smarting from the suspension of Dillon Brooks after his flagrant 2 foul on Warriors guard Gary Payton II — who’ll miss the rest of the series, if not all of the postseason, with a broken left elbow.

They missed his defense and irritation on a night where the Warriors got everything they wanted, but Morant’s potential absence would effectively end the series, if it isn’t over already. The Grizzlies performed admirably without Morant this season, going 20-5 when he was out, but this is a little different, being in the throes of a playoff series against an opponent that feels like it’s getting stronger by the day.

That possibility sparked the fears of the upstarts, and Jenkins likely knows his personal future is tied to his connection with Morant. Morant’s style is reckless — recklessly exciting, recklessly effective and dangerous, for himself and his opponents.

He single-handedly kept the Grizzlies from being spanked by a larger margin with drives and dunks and hitting open threes at a clip hardly anyone could’ve expected coming into the series.

It evokes memories of Allen Iverson during his heyday and perhaps more recently, a young and healthy Derrick Rose. There are audible gasps every time Morant hits the floor, usually after some shape-shifting, mind-bending layup that seems to defy logic.

But with the painful examples, it always seems he’s an awkward step or hard fall away from his knees turning into s’mores and repeating history. It’s hard to pinpoint which movement put Morant’s body in harm’s way considering he often limps around then pops up like Iron Man — wounded but battling.

Before the injury, one could argue he was the best player on the floor Saturday with 34 points and seven assists. Problem is, there were three Warriors who were just as good as Morant in Stephen Curry, Klay Thompson and yes, Poole.

“Ja is having a great series,” Grizzlies swingman Desmond Bane said. “Jordan Poole reached out and grabbed his knee and kind of put it in an awkward position. It’s unfortunate.”

Poole is a rising star, both this season and in these playoffs where he’s opening eyes. At the time of the apparent injury, the Warriors led 115-97 and were putting the finishing touches on a sterling performance.

It doesn’t appear Poole has the rap sheet of others who haven’t earned the benefit of the doubt, and whether or not a player is dirty has no bearing on an individual play.

“It’s unfortunate that there’s a conversation right now because obviously nobody wants to see anybody get hurt,” Curry said. “But there’s nothing malicious about what Jordan did. There’s no comparison. It’s not a joking matter that Ja is hurt, but the rest of it is total BS in terms of the conversation.”

Curry called it “hot stove contact” and wanted to end the discussion there.

When asked about the totality of the Grizzlies’ accusations through the course of the series, Green seemed amused.

“They’re the most physical team, right? We’ve historically been viewed as a pretty soft, jump-shooting team, right? I didn’t just make that up,” Green said. “That’s what it’s been since I’ve been here. But paint, paint away.”

The Warriors hit everything they tossed up on Saturday, one of the more effective and complete performances they’ve had in some time. Perhaps it’ll give them more of an edge for Game 4 on Monday as opposed to being bathed in praise for 48 hours.

The DNA of a title team is still present, even if they aren’t roundly considered the favorite in the West. Dealing with the rhythms of a playoff series isn’t new to this franchise, while it’s a relatively new voyage for the Grizzlies.

“No, not going to sit here and go tit-for-tat,” Green said. “We’ve got a basketball game to win Monday.”