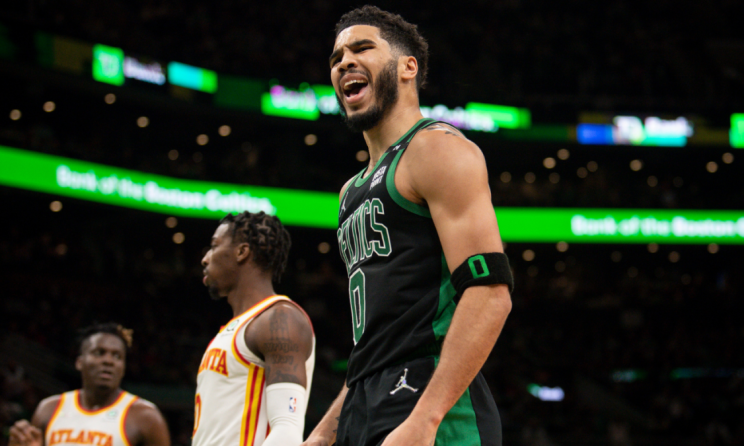 When the Boston Celtics pulled off multiple big moves at the trade deadline earlier this month, there was some slight concern that the roster shake-up might mess with the team’s momentum. Any such fears are long gone, as the Celtics continued to roll right along on Sunday with a 105-95 win over the Atlanta Hawks.

They’ve now won eight games in a row — tied for their third-longest winning streak in the last 10 years — to improve to 33-25 on the season. After a disappointing start, they’ve surged into sole possession of sixth place in the Eastern Conference, and are out of the play-in tournament as things stand.

Leading the way on Sunday, as he has for most of the season, was Jayson Tatum. Ahead of his third straight All-Star appearance later this month, Tatum put on a show with 38 points and 10 rebounds.

His third quarter, in particular, was stellar. With De’Andre Hunter sidelined due to foul trouble, Tatum took over. He poured in 16 points in that frame alone to key the Celtics’ huge turnaround. After trailing by 10 at the half, the Celtics outscored the Hawks 42-23 in the third to take a lead they would never relinquish.

This was the 17th 30-point game of the season for Tatum, who has now moved into 10th place in the league at 25.7 points per game. About the only thing Tatum couldn’t do on Sunday was keep the attention of his son, Deuce. When the TV cameras panned to him at one point in the second quarter, the little man was focused on a phone, which prompted a funny tweet from Utah Jazz star Donovan Mitchell.

Speaking to reporters after the game, Tatum focused more on the team’s recent success than his big day.

“I think we’re just clicking,” Tatum said. “I think the reality is we had a new staff, pretty much a new team. Everybody would have liked for us to play like this out the gate. We made efforts but the reality is things take time. There’s a lot of losses where we wish we could have back and things we wish we could change. But we were all just adjusting to something new. A whole new coaching staff, a new brand of basketball a little bit.”

The turnaround is certainly better late than never for the Celtics, who have been one of the best teams in the league over the last few weeks. They’ve won 15 of their last 19 games, and during that stretch have the best defense (99.4 points allowed per 100 possessions) and best net rating (plus 13.3). If they truly have figured things out, then perhaps they can make some noise in the East this season after all.