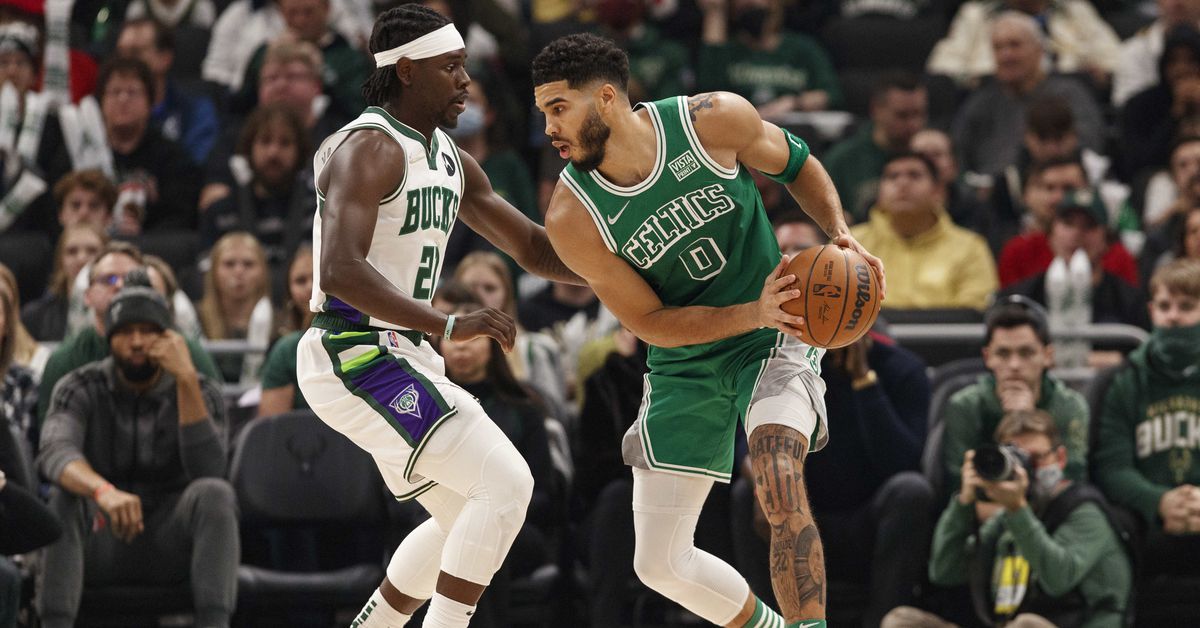 The Boston Celtics spent their Christmas Day in Milwaukee against the defending NBA Champions. COVID protocols were naughty this year, but on Saturday the Celtics were hoping the holiday would bring gifts more bountiful than coal. Unfortunately, the C’s squandered another big lead, seeing a twelve-point fourth-quarter advantage slip away as they fell to the Bucks 117-113.

Unfortunately, Milwaukee’s superstar Giannis Antetokounmpo got rolling in the second half and was nearly unstoppable. He finished with 36 points, 12 rebounds and 5 assists while going 10-15 from the charity stripe. His ability to continually get to the free throw line stymied their comeback, resulting in them outscoring the Celtics 27-19 in the final frame.

The C’s got off to a great start, up 12-5 through transition, effective defense on Giannis and getting to the rim with eight of their first twelve coming in the paint. Jaylen Brown was the ringleader right away, starting 5-5 from the field and scoring 12 of their first 17 points. Brown was fresh, aggressive and breaking down the defense in various ways, including backdoor cuts and tough isolation buckets.

With 1:33 left in the first quarter, he left the floor and headed to the locker room after catching an inadvertent elbow on a box out that chipped his tooth. He would return and help continue to help the Celtics through the half, entering halftime with 19 points and showing some true Christmas grit.

In the second quarter, Milwaukee turned to a zone, trying to turn the game into a shooting contest and keep the Celtics out of the lane, where they were so successful in the first quarter. The zone was successful at first so the Bucks could cut their deficit, but the Celtics caught fire, finishing the half 10-23 from deep and getting contributions from everyone. Payton Pritchard hit three, Marcus Smart nailed one and Jayson Tatum got into a groove with two (and finished the half with 13).

While the C’s hung 62 on the defending champs in the first half, their defense was arguably just as impressive. Milwaukee shot 37.5% from the field and largely held Finals MVP Giannis Antetokounmpo (7 points, 3 assists) at bay. Milwaukee’s offensive struggles were a big part of the reason the Celts lead by 15 at the half.

As you would expect, the Bucks came out firing to start the second half. With 15 points scored in the first four minutes, Milwaukee cut their deficit to 6 quickly. An energetic spurt from Robert Williams, capped by an insane putback dunk, helped re-extend the C’s lead.

There was no quit from the defending champs. Milwaukee went on another run on the back of Giannis’ 13 third-quarter points and ability to live at the free throw line. The rest of the frame was helter-skelter, with both teams trading made buckets, quick 3-pointers or turnovers. Boston clung to a 94-90 lead after three.

Surviving Milwaukee’s onslaught with the advantage was huge. A quick bucket for Tatum to start the quarter, followed by a Jabari Parker triple and transition and-one, grew the Celtics lead back to 12.

Milwaukee couldn’t score to start the fourth with Giannis on the bench, mustering only six points in the first six minutes of the quarter while Tatum and the C’s extended their lead. When Giannis returned just under the six-minute mark, Boston’s lead stood at 13.

A minute later, it was down to six after back-to-back dunks for the Greek Freak and a transition assist to Wesley Matthews. Giannis would then score eight of the next ten points in the game, knotting the contest at 111 apiece.

Two Jaylen Brown free throws put the Celts back up 113-111 when with under a minute to go a frantic sequence ensued. After a near turnover on a pass from Tatum to Brown, Jayson regrouped to go one-on-one with his man. The heady veteran Jrue Holiday came from the weak side, anticipating a spin from Tatum and stripped the ball away. As the Bucks bolted down the floor, Holiday got the ball back for a give-and-go layup that was emphatically pinned to the glass by Rob Williams, only for the loose ball to find its way out to Matthews for another 3-pointer. The triple gave Milwaukee their first lead of the day.

Brown missed a good look on a mid-range step-back out of the timeout by Ime Udoka, and then had to play the foul game. After Khris Middleton made both, the C’s got a great look with Tatum penetrating to the rim and dumping to Timelord for a slam. The only issue: Giannis sniffed it out, stuffing Williams on the dunk attempt. The ball trickled out of bounds, and after a referee review on possession, the Bucks took the ball back.

Middleton knocked in another free throw, growing the lead to four, and the game would end on that mark.

The shorthanded Celtics hope to get a few more players back from health and safety protocols ahead of their next contest, Monday at the Minnesota Timberwolves.

For more postgame coverage of the Celtics’ collapse in Milwaukee, tune into the the Garden Report Postgame Show LIVE on CLNS Media right after the game. Join A Sherrod Blakely, Bobby Manning, Josue Pavon, Jimmy Toscano and host John Zannis for a full breakdown. Plus, the guys will discuss Boston’s reliance on isolation basketball to close out games and their dismal record in clutch finishes.