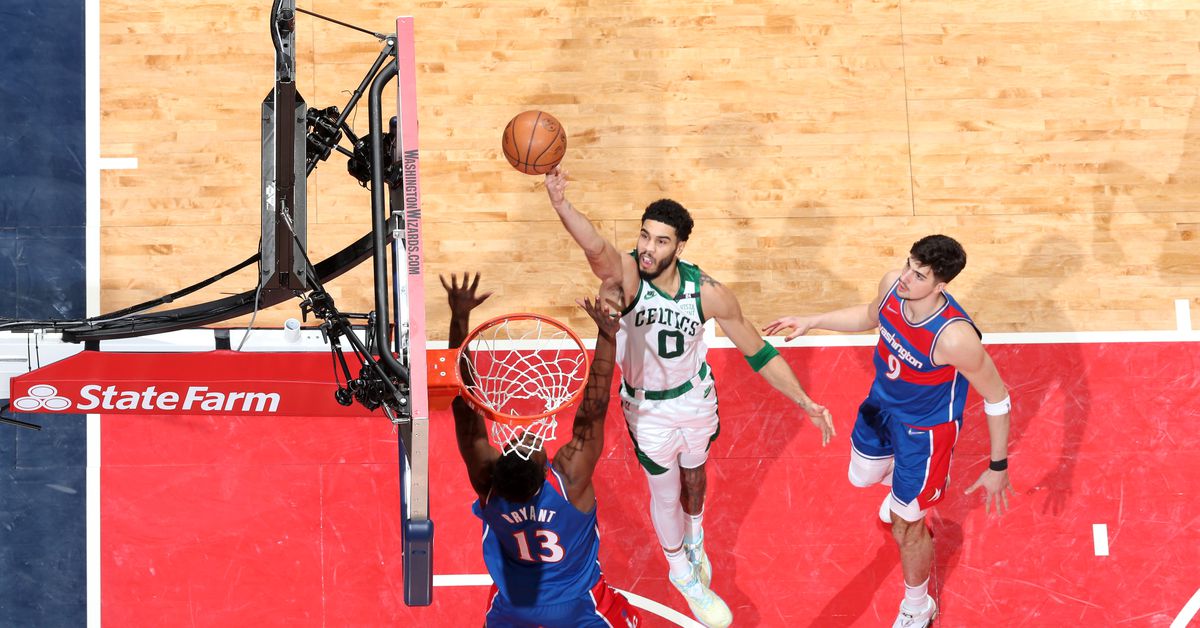 The Boston Celtics reminded why the most optimistic of Green Teamers still believe in this team with a 116-87 afternoon win over the Washington Wizards powered by Jayson Tatum’s explosion of 51 points to go with 10 rebounds and 7 assists with a career-high nine 3-pointers. In a season with some really low lows, this was a very welcome sight.

Much was made of Jayson Tatum’s offensive shooting struggles both recently and over the course of the season so far, shooting a career-worst from the 3-point line. The last few games featured a stretch in which Tatum went 0-21 from behind the line – a streak that he broke on his first attempt today on his way to a career-high 31 first-half points.

Besides Tatum going nuclear, the Celtics benefitted from the return of Marcus Smart (11-4-6, 4 steals, game-high +36), allowing the Celtics to operate at essentially full health. The result was some of the best ball movement we’ve seen all year in the first quarter, with the ball zipping around inside and out and usually leading to a Tatum bucket.

The second quarter did feature some bogged down offense at times, but Tatum again started pouring in points as the clock approached halftime. Halftime did nothing to slow Tatum down, putting in even more buckets. The biggest difference was that the rest of the team caught up with him as the offense was humming like a well-oiled machine from Smart to Tatum to Jaylen Brown (18 points, 10 rebounds) to Robert Williams and pretty much everyone in between as the Celtics went up by as much as 27 points.

Tatum poured in a career-high nine 3-pointers. Only some late-third chucking as the clock wound down hurt his efficiency, which was otherwise stellar.

Tatum checked back in halfway through the fourth quarter with 48 points as Ime Udoka kept his starters out there to make sure this wasn’t another story of a blown lead. He made good on what Celtics fans were looking for, crossing the 50-point mark with a technical free-throw for good measure to put him at 51.

This time, the Celtics successfully put in a full 48 on both ends. Good win against a team above them in the standings.

The Boston Celtics take on the Sacramento Kings on Tuesday night at 7:30 p.m. EST.

For more postgame coverage of the Tatum 51-point explosion in D.C., tune into the the Garden Report Postgame Show LIVE on https://www.clnsmedia.com/ right after the game. Join A Sherrod Blakely, Bobby Manning, Josue Pavon, Jimmy Toscano and host John Zannis for a full breakdown. Plus, the guys will discuss how Boston looked at full strength for the first time in a while.