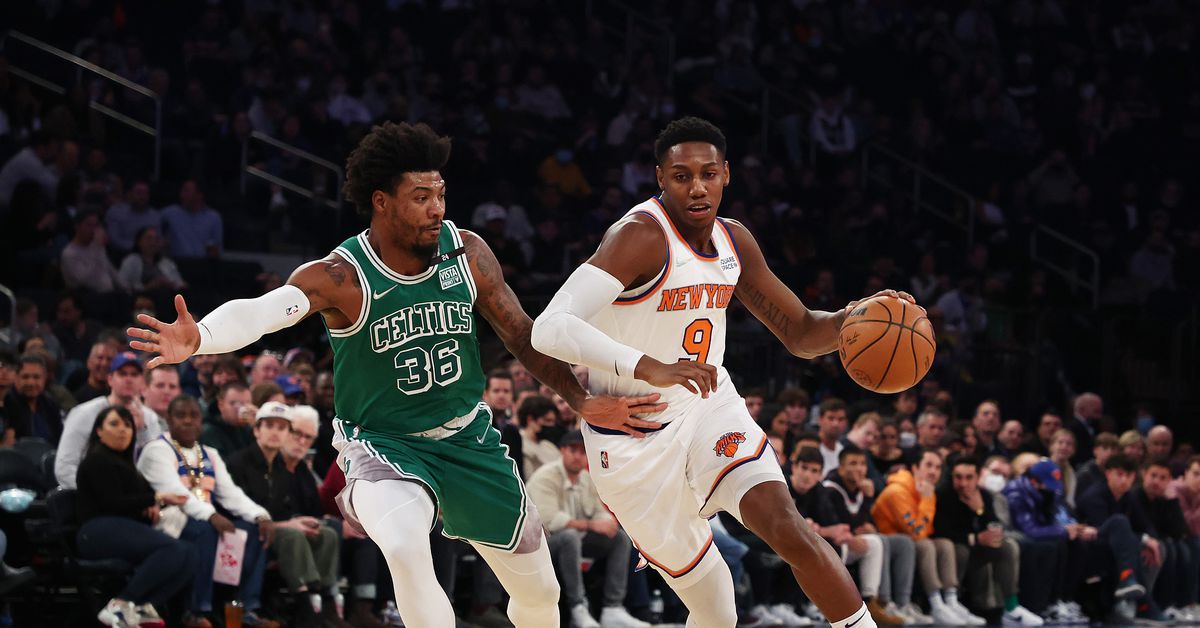 The Boston Celtics looked like a good team for 20 minutes and then gave it all away as the New York Knicks stormed back from down 25 points to take the 108-105 victory after an RJ Barrett buzzer-beating bank-shot 3-pointer.

Jayson Tatum had a tremendous game, taking more of a playmaking role early on, notching 3 assists in the opening 5 minutes of the game. In the second quarter, his scoring came alive, alternating 3-point hits with Josh Richardson over the course of four possessions. Even Al Horford, who’s struggled from behind the line this season, got in on the action.

After giving up an 8-0 run to end the first half, the Celtics started the second half how they ended the first half . . . with a 6-0 Knicks run that prompted a quick timeout from Ime Udoka. The Celtics responded with back-to-back 3-pointers from Tatum and Marcus Smart followed by a big block by Rob Williams and then a fastbreak putback by Al Horford.

The Celtics fell apart on both ends toward the back half of the third quarter on the strength of a 16-3 Knicks run to end the quarter. The Knicks cut it as close as two before Marcus Smart hit a big 3-pointer to give Boston some breathing room. Rinse, repeat. But unfortunately, the fourth quarter was a familiar story.

Evan Fournier and Jayson Tatum exchanged big-time shots down the stretch at squints the 6-minute mark of the fourth quarter. I’d like to report that the Celtics pulled away, but no, this was a tight one the whole way.

Giving up a 25-point lead is still . . . not great. In fact, some might say it’s quite bad. Getting the win shouldn’t change anyone’s opinion on this team. It’s my opinion that the Celtics need more shooting so that when Tatum’s making the right play in crunchtime, he’s not passing to a lineup that has two non-shooting PGs and two non-shooting centers.

Naturally, the Celtics didn’t pull it off. Jayson Tatum hit a huge shot to tie the game with 1.5 seconds left. Real Celtics fan who have been hurt time and time again knew the Knicks were going to pull it off, and lo and behold, RJ Barrett banked a 3-pointer in at the buzzer to win the game.

Evan Fournier had his third big game against the Celtics in three tries this season. Seriously, why’s he so upset with the Celtics? Give us a break. Thankfully, his last chance to torch us in the regular season comes Saturday night in Boston. Fournier finished with a career-high 41 points and 8 rebounds after making 10 3-pointers. Julius Randle complemented his scoring after a slow start, finishing with 22 points and 8 rebounds points. New York’s favorite for the night – RJ Barrett – finished with 13 points after his buzzer beater.

For Boston, Tatum led the way with 36 points, 9 assists and 6 rebounds. He was more of the complete package after struggling at times last night against the Spurs. Dennis Schröder added 20 points off the bench while Marcus Smart chipped in 14 points. Unfortunately, the latter two failed to complement each other, missing a bunch of fourth-quarter shots off of Tatum’s passes. Robert Williams was exceptional defensively, finishing with 7 blocks to go with 6 points and 9 rebounds.

The Celtics and the Knicks will finish the latter half of this home-and-home series Saturday night at 7:30 p.m. EST in the TD Garden on NBATV.

For more postgame coverage of the Celtics win in New York, tune into the the Garden Report Postgame Show LIVE on CLNS Media right after the game. Join A Sherrod Blakely, Bobby Manning, Josue Pavon, Jimmy Toscano and host John Zannis for a full breakdown. Plus, the guys will discuss Boston folding in the fourth . . . again.