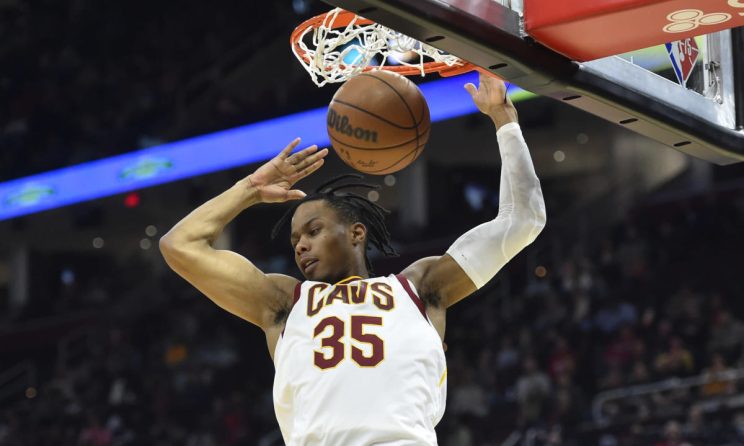 The NBA is in the midst of its most trying stretch of the season as players and teams alike battle ongoing issues surrounding the coronavirus pandemic and health and safety protocols.

Entering play on Monday, over 70 players were out because of the health and safety protocols while three games were postponed on Sunday alone. The NBA is working diligently with the NBPA to avoid further stoppages as conditions around the country change rapidly.

Amidst the uncertainty, some teams around the league have continued to adjust and perform well on a nightly basis. Some have managed to put together impressive stretches to climb up the standings in their respective conferences.

To further make sense of it all, Rookie Wire took a look at the NBA and ranked each team from worst to first. We will come back each week and provide our latest assessment on the best teams and those that are rising.

Detroit snapped a franchise-record-tying 14-game losing streak on Sunday with a win over the Miami Heat. Saddiq Bey looks to be snapping out of an early-season shooting slump, which is certainly a positive as the Pistons look to continue without Jerami Grant in the lineup due to a thumb injury.

The Magic were among several teams that experienced a tumultuous week with health and safety protocol issues. On Friday, they were forced to sign four players off of their NBA G League affiliate to field a team versus the Heat. Despite the circumstances, they were able to snap a seven-game losing streak on Saturday versus the Brooklyn Nets, a team also decimated by COVID concerns. Their contest on Monday against the Toronto Raptors was postponed so they will get a few days off before trying again with the Atlanta Hawks on Wednesday.

What an odd week for the Thunder, who experienced two buzzer-beating game-winning shots. Unfortunately, they were on the wrong side of the first one when Devonte’ Graham sank a 61-footer on Wednesday, the longest game-winning shot in over 25 years. They bounced back with a game-winner of their own on Saturday over the Los Angeles Clippers when Shai Gilgeous-Alexander dropped in a gorgeous step-back 3-pointer to beat the clock.

For more coverage on the Thunder, visit Thunder Wire

The Rockets managed a 2-2 record last week after defeating the Hawks and Pistons. During their win over the Hawks, they outscored Atlanta 44-25 in the fourth quarter to pull it out.

The Pelicans are riding a two-game win streak after defeating the Thunder and Milwaukee Bucks. As aforementioned, Devonte’ Graham hit a miracle 61-footer to send the Pelicans to their victory over the Thunder, which was the longest game-winner in over 25 years.

In case you forgot about it:

San Antonio has alternated wins and losses over its last six games following a defeat to the Sacramento Kings on Sunday. One bright spot for the team continues to be the 3-point shooting of Keldon Johnson. He shot 33.1% from beyond the arc last season but has improved to 46.1% this season, which ranks fourth in the NBA.

Portland snapped a seven-game losing streak last week and has now posted two straight wins. The Trail Blazers still hold the fourth-worst defense in the league with an average offense, two areas that must improve if they want to stay in the playoff picture.

Domantas Sabonis continues to perform like an All-Star this season, while the Pacers got head coach Rick Carlisle back from health and safety protocols. They have won four of six and could be on the verge of turning things around.

The Kings have gone 2-1 with Doug Christie serving as acting head coach after interim head coach Alvin Gentry tested positive for the coronavirus. The team gave Christie the game ball after winning in his first game on the sidelines on Wednesday.

It was a roller-coaster week for the Knicks. The team turned to a couple of rookies and they stepped up. First, it was Quentin Grimes with a career-high 27 points on Dec. 12 versus the Milwaukee Bucks. Then, Miles McBride stepped in and scored a career-high 15 points and nine assists. Unfortunately, they both went into health and safety protocols following their career performances.

The Raptors went 2-1 last week with their lone loss coming against a short-handed Nets team. They face an uncertain week ahead after adding Pascal Siakam, Gary Trent Jr. and Dalano Banton into the health and safety protocols on Monday. Toronto has had a couple of games postponed and could see more moved back.

Since winning seven straight last month, the Hawks have gone just 3-6. Hawks head coach Nate McMillan said the team is still learning how to play with urgency and execute late in games. They will now be forced to continue without Trae Young, who was placed into the health and safety protocols over the weekend.

The Mavericks suffered a couple of close losses last week without Luka Doncic, falling on a buzzer-beater to the Los Angeles Lakers on Wednesday and by six points to the Minnesota Timberwolves on Sunday. To make matters worse, Kristaps Porzingis left early on Sunday with a foot injury so they figure to be short-handed for the upcoming slate of games this week.

Since losing five straight, the Timberwolves have won four in a row after beating the Mavericks on Sunday. The team lost Anthony Edwards to the health and safety protocols after dropping 38 points on Wednesday with a franchise record of 10 3-pointers. Their bench continues to perform well as their plus-19 advantage on Sunday was their second-highest of the season. They will continue to need to rely on that with Patrick Beverley and Jarred Vanderbilt going into the protocols on Monday.

Boston is one of the many teams in the NBA dealing with health and safety protocol issues. Entering play on Monday, the team is only expected to have nine players available following the signing of CJ Miles. Despite the recent COVID problems, the Celtics won two out of three last week.

For more coverage on the Celtics, visit Celtics Wire

LaMelo Ball and Terry Rozier are back but the Hornets have lost three of four. On Sunday, they shot just 36% from the field in a 31-point loss to the Phoenix Suns. However, Gordon Hayward provided one bright spot last week with a vintage 41-point effort in a win over the Spurs.

Bones Hyland responded after he was benched for violating team rules with a career-high 24 points on Friday in a win over the Hawks. In all, the Nuggets continue to play well despite a smattering of injuries to key players with Nikola Jokic leading the way. Consider this stat: Denver is a plus-206 with Jokic on the court, and a minus-198 with him off.

Washington has gone just 6-12 over its last 18 games after starting the season off with a 10-3 record. They have the fourth-worst defense in the league over that span.

The Lakers had won six of eight but have dropped back-to-back contests since Austin Reaves’ game-winner over the Mavericks on Wednesday. However, their defense is starting to turn the corner as it is ranked 11th in the NBA as of Monday.

For more coverage on the Lakers, visit LeBron Wire

The Sixers have lost three straight games and have dealt with several injuries and players in health and safety protocols. Their contest on Sunday versus the Pelicans was postponed but they are expected to return on Monday against the Celtics. They have struggled to build positive momentum as of late but still have Joel Embiid on the roster. He is playing at an MVP-type of level this season.

For more coverage on the 76ers, visit Sixers Wire

L.A. has dropped two straight after losing on a buzzer-beater by Shai Gilgeous-Alexander on Saturday. Despite the skid, the Clippers have done an excellent job staying afloat without Paul George.

After having a couple of games postponed due to health and safety protocols, the Bulls returned on Sunday by posting a win over the Lakers. DeMar DeRozan led the way with 38 points, which, coincidentally, was the same amount of points he scored the last time the two teams met on Nov. 15. Thanks to DeRozan, the Bulls went 2-0 over the Lakers this season.

Memphis has won 10 out of their last 12 games to jump up to fourth in the Western Conference. The Grizzlies have the best defensive rating and net rating in the NBA over that span while their offense is sixth. They have done that without Ja Morant, who is expected to return soon.

The Heat have won four of six as Max Strus is playing some of the best basketball of his career. He erupted for a career-high 32 points on Friday in a win over the Magic as he drained eight 3-pointers. He followed that up with 24 points in a loss to the Detroit Pistons on Sunday. The Heat continue to receive strong contributions from several players as they weather the storm without Bam Adebayo, Jimmy Butler and others.

Cleveland owns the longest winning streak in the NBA at six games as they are outscoring opponents by 21.5 points over that span. They are another team dealing with multiple COVID issues and will have their work cut out for them to continue their recent hot streak. Still, the Cavaliers have to be one of the feel-good stories in the league this season given their strong start.

Milwaukee posted a strong win over the Pacers without Giannis Antetokounmpo on Wednesday but has since lost two straight. They are down four players due to the health and safety protocols but have a relatively easy schedule on the horizon (vs. HOU, @DAL, vs. BOS), which should ensure they don’t lose too much ground without their MVP.

The Nets have 10 players in the health and safety protocols and were forced to postpone two games because they did not have enough to suit up. Among those players is Kyrie Irving. The Nets, after making a commendable decision to bench him, have now reversed course and are allowing him to participate in practice and play in road games. Whether or not you agree with the decision, the Nets will soon be operating at near-full strength and can finally prove just how good they are.

For more coverage on the Nets, visit Nets Wire

For a team that has issues with consistency, their recent stretch proved to be a perfect example of that. The Jazz had won eight in a row after beating the Clippers on Wednesday but have since lost to the Spurs and Wizards, two teams trending in the wrong direction. However, they still have the best offense in the league while they are sixth in defense.

Congratulations to Stephen Curry for surpassing Ray Allen as the all-time 3-point leader. The moment proved to be an outstanding highlight for the league as a whole amidst plenty of chaos due to the coronavirus. The Warriors have won three of four and appear to be cementing themselves a championship contender this season.

For more coverage on the Warriors, visit Warriors Wire

The Suns have posted three straight wins to overtake the Warriors atop the standings in the Western Conference. They are coming off a 31-point win over the Hornets as nine players scored in double figures. Here is more good news for the Suns: Devin Booker returned on Sunday after a seven-game absence. He scored 16 points.