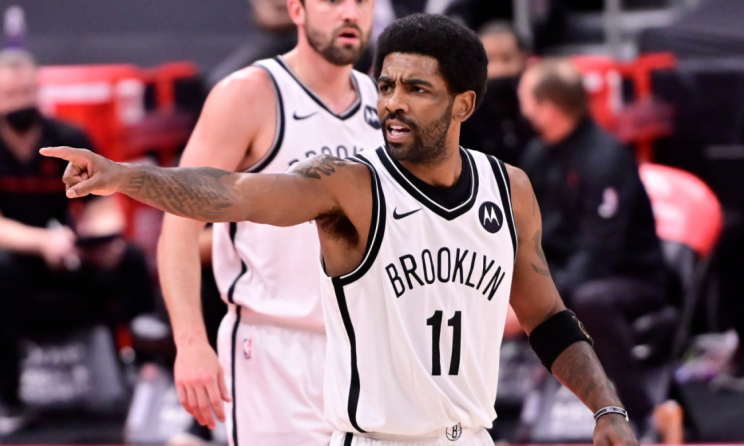 NEW YORK — There is a player who cannot practice or play professional basketball in New York City right now. This is an inconvenient situation because he is a member of the Brooklyn Nets, and it will not change until he gets one shot of a COVID-19 vaccine, per city regulations. He has not committed to doing that, and the team is getting less optimistic about him coming around, according to ESPN.

At the Nets’ practice facility this week, the unvaccinated player’s teammates prepared for the 2021-22 regular season without him. Addressing the subject with varying levels of trepidation, they stressed his importance to the team without directly urging him to get the shot. Mostly, they talked about him the same way they’d talk about an injured player.

“It’s a unique circumstance,” Kevin Durant acknowledged. “But at the end of the day, he’s not here.”

The absent player is Kyrie Irving, a seven-time All-Star coming off his first 50-40-90 season and third All-NBA selection, so this is the Nets story right now, not their (impressive!) offseason, not their preseason game against the Milwaukee Bucks on Friday, which will be the first time they play at Barclays Center since their excruciating Game 7 loss against that same opponent in June. If Irving decides to get vaccinated against the disease that is still killing almost 2,000 people a day in the United States, though, the discussion around the team will shift back to the subject of inevitability. During the offseason, James Harden told Sports Illustrated that nobody can beat the Nets at full strength. I have yet to hear a compelling counter-argument.

Brooklyn has even more talent than it did in Year 1 of the Big 3 era. Marquee free-agent addition Patty Mills will, in his words, “ping the ball around, fly around, create confusion, create havoc” on offense. LaMarcus Aldridge is back in the mix, and fellow vets Paul Millsap and James Johnson are among the band of bigs fighting for minutes. Jevon Carter brings point-of-attack defense and rookie Cam Thomas brings buckets. If the Nets are somehow even better than advertised, though, it might have more to do with internal improvement. Harden wasn’t in shape at the beginning of last season and began it as a member of the Houston Rockets. Blake Griffin, another midseason addition, said he’s in a better place mentally and physically after his first fully healthy offseason in three years. Switchy center Nicolas Claxton is only 22, and the uncategorizable Bruce Brown is 25. Brown might have turned himself into a shooter.

Beyond all that, assuming Irving becomes a full-time member of the team, Brooklyn can establish some semblance of continuity this time around. Already, coach Steve Nash has referenced the “corporate knowledge” that the Nets built over the course of last season, particularly on defense. Little is expected of Brooklyn on that end, but that doesn’t mean it is only aiming for average.

“I think we’ve learned a lot from last year,” Brown said. “We can switch 1 through 5 with most of the guys, so I think we’re gonna be really good defensively this year.”

Defensive rebounding will likely remain an issue. Jeff Green’s shooting at the 5 spot might be missed in certain matchups. Health is an enormous variable, as is Irving. Should the Nets become whole, though, and spend the season experimenting with lineups and learning from the occasional loss, just imagine the heights they could reach.

Nets believer: Why, exactly, can’t the Nets win 70 games? They have the best starting lineup in the league and the best bench. They should’ve won it all last season, and their only real competition in the East lost the one guy who could make K.D. work for his points. They’re surely not worried about this weird Lakers team full of ill-fitting parts, and the two best teams in the West have stars recovering from ACL injuries. It is difficult for me to believe that any so-called Nets skeptic is actually being sincere, but commence the nitpicking, I guess.

Nets skeptic: Let’s not crown the Nets some sort of all-time team when we don’t even know if one of their stars is going to be able to, like, participate in the season. Let’s also remember that the truly elite teams — and the vast majority of championship-winners — are awesome on both ends. Congratulations to Brooklyn on adding more ring-chasing vets, but I’d be more impressed if it had solved its actual basketball problems. Is it nitpicking to note that Carter and Johnson are the Nets’ two best defensive additions and neither of them is likely to be in the playoff rotation? Do you think Giannis Antetokounmpo is worried about Aldridge and Millsap? I’m not betting against all of this star power, but I’m not assuming it’s going to result in a Finals appearance, let alone a title.

Nets believer: Based on what they did offensively last year, they’re already an all-time team. That was only the beginning, and I don’t see why the defense should be bad. Everybody remembers how much of a mess they were early on, particularly in the immediate aftermath of the Harden trade, and overlooks the dramatic improvement that followed. They deserve credit for buying in and executing a scheme that requires a ton of trust and communication. (As for Kyrie, I find it hard to believe that he will choose not to be a part of this, but, honestly, they’re good enough to win a title without him. You saw what it took for the Bucks to get past them, and this year’s roster is clearly deeper.)

Nets skeptic: I don’t know if it is deeper, actually, because I’m not high on the moves they made. Green was a perfect fit because he had defensive versatility and was a legitimate floor spacer. It’s nice that Griffin came back on the cheap, but opponents are going to be more willing to live with him (or Millsap or Aldridge or Johnson) taking 3s. As lovable as Mills may be, he’s not as big or switchable as someone like, say, Spencer Dinwiddie, or even Landry Shamet. If I were building a team around ball-dominant superstars, I’d be looking for 3-and-D guys like Green.

Nets believer: If Brooklyn went with your team-building strategy, we would have been robbed of Brown’s breakout and Griffin’s rejuvenation. Why do you need everyone on the roster to be a deadeye shooter when you can put K.D., Harden, Kyrie and Joe Harris on the floor at the same time? I love that the front office went after guys who know how to play.

Nets skeptic: All I know is, if I already have those guys on my team, I’m not really looking for more playmaking. Philosophical differences aside, though, my broader point is that, like anybody else, the Nets have weaknesses. In a playoff series, the book on them will be the same as it was last year: Beat them up on the boards, attack them in transition, hunt their weaker defenders, bait them into stagnant offense. Over time, you can wear them down.

Nets believer: Well, the Bucks did all that and, again, still needed something close to divine intervention in order to win that series. I acknowledge that the Nets have “weaknesses,” in the same way every team in the history of basketball has had them. We could go back and forth forever about the role players and the relative merits of different lineups, but I just don’t think any of it really matters. The Nets are simply way better than everybody else.

Nets skeptic: Way better at scoring? Yes, if Kyrie is playing. “Simply way better,” in general? They have not proven that.

Usually, when a young player produces the way Claxton did in his first real season, it means more minutes and more responsibility. On a team with championship expectations and a colossal logjam of vets at his position, one can make no such assumption. Even though Nash has said that Claxton will have the opportunity to play a “prominent role” because of his “unique profile” — Claxton is 6-foot-11 vertical spacer with the lateral quickness to stick with guards on the perimeter — it is not totally clear where he fits in.

In the last three games of the Milwaukee, series, Claxton was essentially out of the rotation. Ideally, this regular season will be about making sure that doesn’t happen again. If the Nets’ main priority is defense, they’ll invest in Claxton’s development by letting him play through mistakes and tough matchups. He raises their ceiling on that end considerably.

There is upside on the offensive end, too, and he said he has tweaked his shooting mechanics. Claxton shot just 48 percent from the free throw line last season. That isn’t necessarily a problem for Brooklyn, though, if he just rebounds well, sets good screens and rolls hard. None of its more proven, polished bigs can do what he does defensively.