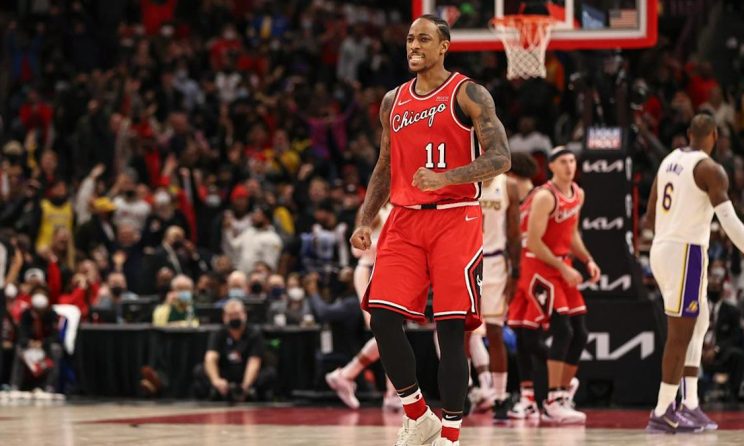 In his first game since landing in the league’s health and safety protocols shortly before a Dec. 6 tipoff against the Nuggets, DeRozan scored 19 of his 38 points in the fourth quarter of the Chicago Bulls’ pulsating victory over the Lakers Sunday night at a raucous United Center.

And if you want a window into why DeRozan leads the NBA with 8.2 points per game in the final period, just listen to this.

“I love it. Growing up as a kid, having that imagination, trying to recreate your favorite players’ moments. For me, it’s big. It’s an honor to be trusted in those moments. I never take it for granted. It’s an adrenalin rush that you can’t duplicate. So you try to make the most of it every time you’re put in that position. There’s nothing like it. It’s fun. You gotta take the good with the bad. And I’m willing to take both.”

That was DeRozan’s answer when asked how comfortable he feels in clutch situations.

This was truly a breathtaking performance. With Zach LaVine still sidelined in protocols and not having played since scoring 29 points on Dec. 4 to help the Bulls sweep a two-game set in New York against the Knicks and Nets, DeRozan came up large.

He posted season-highs by sinking 16 of 17 free throws. He passed for a team-high six assists. And despite everybody in the building knowing he’d take the shot, his 20-foot jumper over LeBron James nudged the Bulls ahead for good with 52.6 seconds left.

“He knows it. I’ve said it over and over. I got the utmost respect for LeBron. I can say I’ve competed against one of the all-time greatest players in my generation of basketball,” DeRozan said of their longtime respectful rivalry. “It’s a blessing to be able to share the floor with him from the playoff series to being in the Eastern Conference with him to All-Star games. It’s definitely one of those situations that when I’m older I can say I played against that guy.”

DeRozan had joked that boredom proved his only symptom for his asymptomatic COVID-19 case. But he emphasized how bored he truly was by revealing he went to the Advocate Center at 1 a.m. to work out individually as soon as he was cleared. This was in advance of Friday’s practice.

“I felt free as a bird,” DeRozan said, laughing. “Just getting out there being with those guys, being in front of the fans. Getting out the basement I was in for 10 days.”

Instead, he locked the Lakers down there. The victory signified the Bulls swept the season series. With a 2-0 advantage over the Nets as well, DeRozan is no longer downplaying high-profile victories for an 18-10 Bulls squad.

“It means a lot when you can beat the great teams in this league consecutive times. We did it a few times this year. It speaks volumes. It gives us confidence and the belief that we can beat anybody, whether it’s at home or on the road,” he said. “We take on that challenge every time we play these teams.”

Speaking of challenges, how about trying to guard DeRozan, particularly in crunch time?

“There’s a calmness to him. He doesn’t get rattled,” coach Billy Donovan said. “I think he’s been in so many of these moments throughout his life in his career that things slow down for him. I think he knows exactly what he has to get done. And he finds way just to stay totally locked in.

“It’s really an incredible gift that he has. And I’m sure it’s something he has worked on over the years that he has developed. The ball is in his hands and you know what, he’s going to make the right play. He’s going to get to his spot and he’s going to generate a good shot for himself or he’s going to find the open man. That’s the way he plays.”

DeRozan agreed that this closing ability is something he has worked on as his career has progressed. The Bulls are serving as the beneficiaries in a massive way.

“I try to clear my mind as best I can. Kind of erase everything that happened before and try to completely lock in,” DeRozan said. “It’s something I’ve been working on for the last couple years of just channeling my energy in a positive light and focus on just one thing. And that’s winning.”