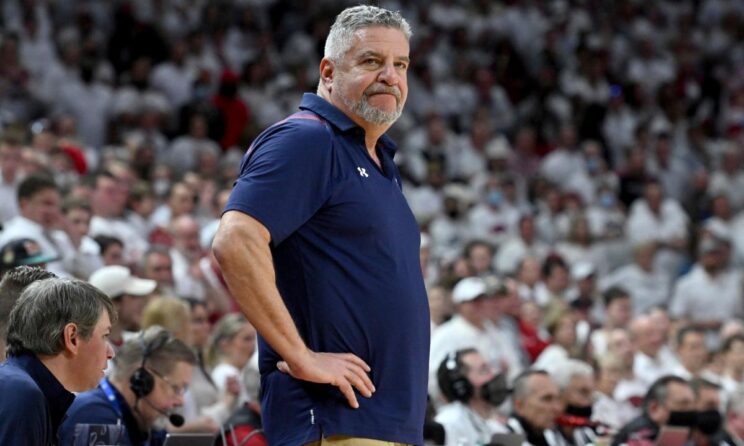 Auburn men’s basketball head coach Bruce Pearl did an interview Wednesday on the “McElroy and Cubelic in the Morning” radio show ahead of the 2022 NBA draft on Thursday.

His words weren’t so kind for Gonzaga’s 7-footer Chet Holmgren, who is the projected No. 2 pick by USA TODAY Sports.

Pearl’s comments about Holmgren came in response to a question about who he’d take No. 2 after Jabari Smith. Pearl went with Banchero.

WHAT ARE THE ODDS? Paolo Banchero late betting favor to go No. 1, bettors turn back on Chet Holmgren

Gonzaga center Chet Holmgren (34) reacts after fouling out in the Sweet 16 game against Arkansas.

“Chet’s intriguing, but so was Shawn Bradley,” Pearl said referring to the Philadelphia 76ers No. 2 overall pick in the 1993 NBA draft.

“The NBA stands for No Boys Allowed,” Pearl said, continuing to talk about Holmgren. “And that body scares me. It just does. He goes knee-to-knee with the wrong guy, and he could get broken in half. Therefore at the very top of the draft, I think I got to go with what I know not what could potentially could maybe someday be.”

Prior to Pearl talking about Holmgren, Pearl was asked to talk about how Jabari Smith competes behind the scenes.

“I don’t think there’s a concern there,” Pearl said of Smith’s competitiveness. “I think the question speaks to, I think, the No. 1 reason why you take him No. 1. Absolutely the jump shot is the best from any man his size in the last 10 years in college basketball — all the way to KD (Kevin Durant) maybe. That’s pure and that translates. That’s productivity right away.

“The second thing is he can guard one through five, because he does compete defensively,” Pearl continued about Smith. “The No. 1 reason is the kid doesn’t lose. That’s No. 1. He doesn’t lose.”

USA TODAY Sports projects Walker Kessler to be the No. 25 pick in the 2022 NBA draft. Here is what Pearl said about Kessler on Wednesday.

“He’s an amazing athlete,” Pearl said. “People don’t talk about his athleticism, his speed, his quickness, his ability to move laterally — obviously his ability to elevate. And he’s not 7-foot. He’s 7-1 and a little bit. And an inch and a half make a big, big difference. So obviously, he’s able to impact the game. I thought he was the most impactful player in college basketball last year, because of what he did at the rim both offensively and defensively.”

Pearl talked about Kessler for a couple of minutes, and he ended by comparing him to Boston Celtics forward and former Florida Gators national champion Al Horford along with NBA centers Brook and Robin Lopez.

“I think he’s going to be a dominating 3-point shooter at the next level,” Pearl said of Kessler. “Al Horford never made a three at Florida, never made a three at Florida, and he’s one of the better stretch fives in the NBA at his age. Walker is ahead of him. He could be like one of the Lopez twins — a factor at the rim and a factor at the 3-point line.”

The Orlando Magic have the No. 1 pick in the 2022 NBA draft. The draft is scheduled to start at 7:30 p.m. ET on Thursday (first round airing on ABC; first and second rounds on ESPN).

Erik Hall is the lead digital producer for sports with the USA Today Network. You can find him on Twitter @HallErik.